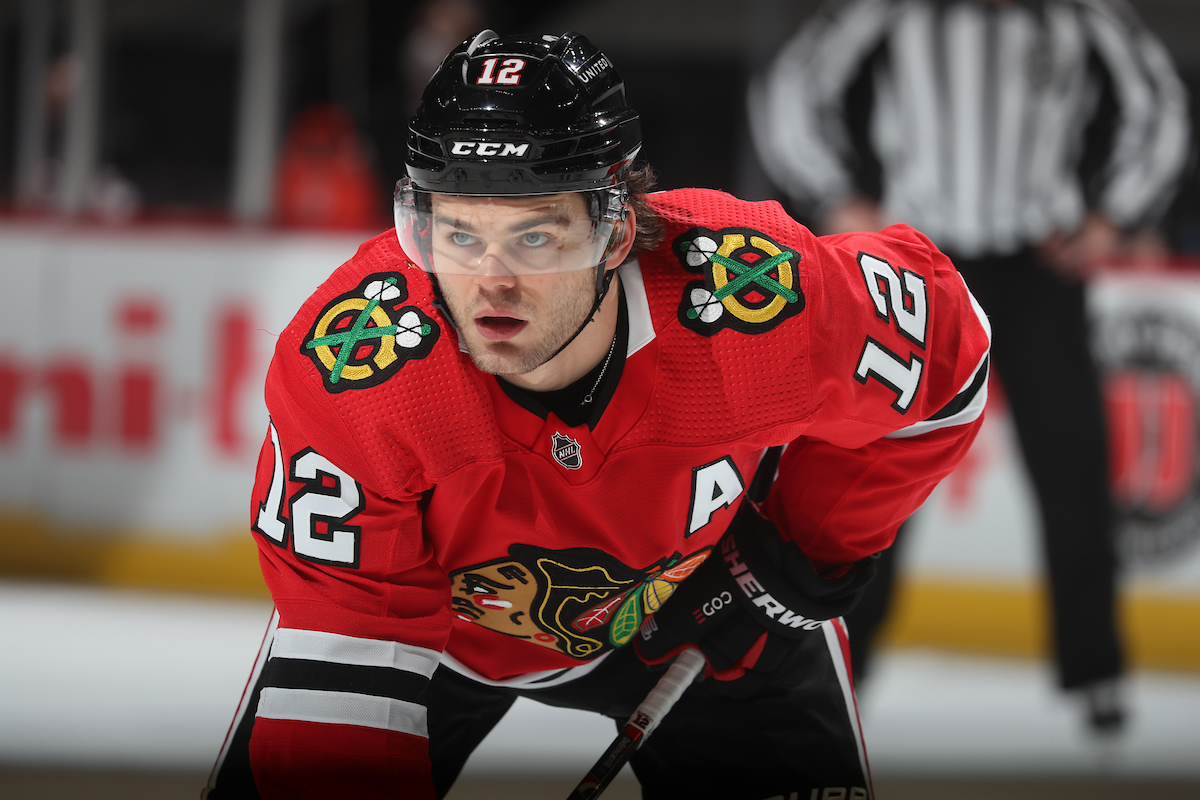 The Blackhawks got an unusual 6:30 PM start in Chicago on Tuesday night. Wyatt Kalynuk got the call for Nicolas Beaudin on the blue line and Dylan Strome was spending time on the wing with Kirby Dach centering his line.

Chicago’s offense didn’t get the memo that the game started a half hour earlier than usual. The first period could have cured insomnia for Hawks fans; the Blackhawks went minutes without a shot multiple time in the opening period and finished the opening 20 minutes with only five shots on net. Carolina netminder Alex Nedeljkovic wasn’t tested much at all.

Kevin Lankinen showed up for work on time, thankfully. Lankinen stopped all 13 shots he faced in the first period to keep his teammates in a game that could have been blown open early by a Carolina team that attacked and a Blackhawks team that didn’t fight back much.

Whatever coach Jeremy Colliton said to his skaters during the first intermission worked.

Dach set up Strome for a 2-on-1 rush on the first shift of the second period and the new daddy finished to give the Hawks a 1-0 lead.

Dach and Connor Murphy picked up the assists. The helper is the first of the new year for Dach in his third game back. And it did appear someone grabbed the puck for a souvenir for Strome and family.

Dougie Hamilton took a penalty in the first period that didn’t hurt his team. When he went to the box three minutes into the second period, Chicago made it hurt.

Patrick Kane made a nifty play to lift a stick and Alex DeBrincat put the puck into the back of the net to extend the Blackhawks’ lead to two.

Kane was credited with the only assist on DeBrincat’s 19th goal of the season.

In the opening ten minutes of the second period the Blackhawks looked like a totally different team than they did in the first period. Chicago started the game completely flat, but came out of the room attacking with speed in the second. At the mid-point of the second period, shots were even at four for each side.

Then Carolina woke up. Or the Blackhawks took their foot off the gas. Or a combination of the two.

Nikita Zadorov took a bad tripping penalty behind the Blackhawks net at 10:33 into the second and the momentum shifted hard. The Canes didn’t score on the power play but they continued putting pressure on the Blackhawks.

At 15:41 into the second, Brady Skjei flipped a shot at the net that appeared to be redirected by Andrei Svechnikov. The shot slipped past Lankinen for Svechnikov’s tenth of the season. The Blackhawks’ lead was cut in half.

Carolina spent most of the final four minutes in the Hawks’ end but didn’t beat Lankinen again. When the second period ended, Chicago held a 2-1 lead. The shots that were 4-4 at ten minutes into the period now favored Carolina 12-7, giving the visitors a 25-12 shot advantage after 40 minutes.

Faceoffs have been an issue for the Blackhawks all season and Chicago was bad in the first two periods. Led by Jordan Staal, who won all 11 of his faceoffs, the Hurricanes won 29 of 44 faceoffs (65.9 percent) through two periods.

Staal won the opening faceoff of the third period to make him a perfect 12 for 12 at the dot.

At the television timeout with five minutes left in regulation, the Canes had a 4-2 shot advantage in the third period. Yes, six total shots in 15 minutes of hockey. The Hawks were clinging to a one-goal lead.

Carolina emptied their net with a little more than two minutes remaining for an offensive zone faceoff.

Zadorov and Connor Murphy were stuck on the ice for a two-minute shift with a couple icings inside the final minutes, including one bad decision to ice the puck by Zadorov. Lankinen eventually stopped a puck to get a change the Hawks were able to hang on for a big 2-1 victory.

The Blackhawks put 16 total shots on net in 60 minutes of hockey. Lankinen earned two significant points in the standings for his team.

Lankinen stopped 31 of 32 in the win. He was terrific.

Dach didn’t win any of his eight faceoffs. After going over 20 minutes in each of his first two games he was limited to 13:43 but did block two shots in the game.

On the other hand, new dad Strome won seven of eight faceoffs to go with his goal.

Kane skated more than four minutes more than any other forward (23:06) but was not credited with a shot on net.