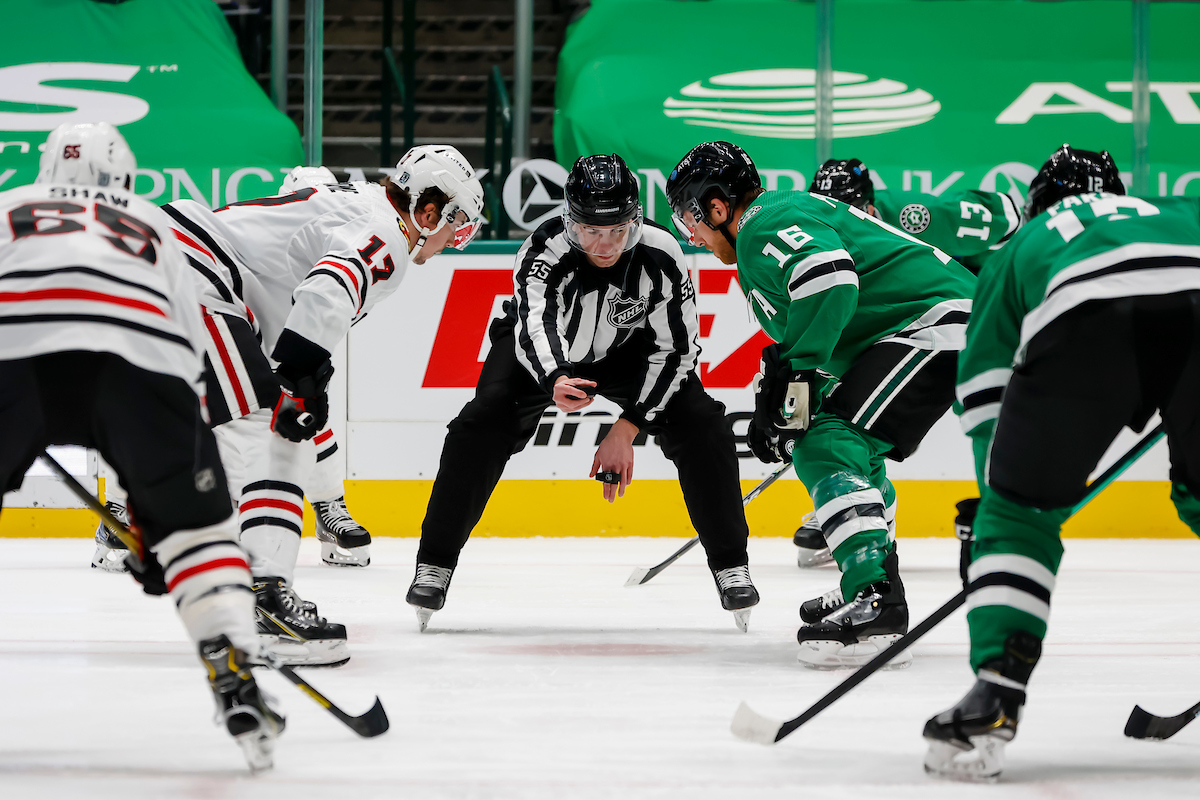 After beating the Stars in Dallas on Super Bowl Sunday, the Blackhawks came into Tuesday night’s game with a different look.

Kevin Lankinen replaced Malcolm Subban in net, which wasn’t a surprise. Unfortunately, Connor Murphy was out of the lineup because of a hip issue. Before the game coach Jeremy Colliton confirmed that Adam Boqvist had COVID-19 and would need some time to get his legs back under him, so Lucas Carlsson entered the lineup.

Matthew Highmore was also a scratch in favor of a seventh defenseman. Madison Bowey dressed for the first time as a member of the organization, a significant game (it makes him eligible for the expansion draft after the season).

So Chicago was rolling seven defensemen and 11 forwards against a Dallas team that’s had little trouble scoring this season.

Somewhat surprisingly, Jake Oettinger got a second straight start in net for the Stars.

It took Dallas only five minutes to get on the board. An ugly shift for Pius Suter that included two turnovers ended with Roope Hintz beating Lankinen for the first goal of the night.

After the Hintz goal the Blackhawks would get plenty of opportunities but couldn’t convert. Chicago had three power plays in the first period (the third rolling over to start the second) but none of them was successful.

Dallas out-shot the Hawks 10-9 in the first period, not an ideal number considering the amount of power play time the Hawks had in the period.

In the second period the Blackhawks got a little lucky and also got back on track.

The luck came on what appeared to be a second goal for Dallas. Jamie Benn scored the would-be goal but was ruled to have interfered with Lankinen on the play. The goal was waived off.

Chicago’s power play got back on track in its fourth opportunity. Mattias Janmark sniped home his fifth of the season to tie the game.

Philipp Kurashev and Dominik Kubalik were credited with the assists on the Janmark goal.

Lankinen was superb in the second. He officially faced 13 shots in the period and stopped them all, a few of which were terrific chances for the Stars. At the end of 40 minutes of play, Dallas had a 23-17 shot advantage but the score was tied at one.

The Hawks started the third period with better puck possession initially but the period evolved into a back and forth affair. Both goaltenders made some strong saves in the first half of the period to keep the game knotted.

Dallas had a couple periods with strong pressure on the Hawks defense but couldn’t beat Lankinen. For the second straight game, the Stars and Blackhawks headed to overtime.

Lankinen made 32 saves in regulation. Ian Mitchell (17:46) was third among Hawks’ defensemen in ice time at the close of the third period. Duncan Keith led the team in ice time (23:34), blocked shots (six) and shots on net (five).

Brandon Hagel got on the ice in overtime and made it count. He fed Suter, who made a pretty move around a defender and slipped the puck past Oettinger for the game-winning goal.

Lankinen made two more saves in overtime to earn the second point. He was terrific throughout once again and added the secondary assist on the game-winner for good measure.

Mitchell got on the ice in overtime to finish the night with the second most ice time among Hawks’ defensemen. Calvin de Haan was second on the team with five blocked shots in 17:21.

In his Hawks debut, Bowey skated 10:28 with two hits and one blocked shot.

Suter and Patrick Kane led Hawks’ forwards with four shots on goal each.