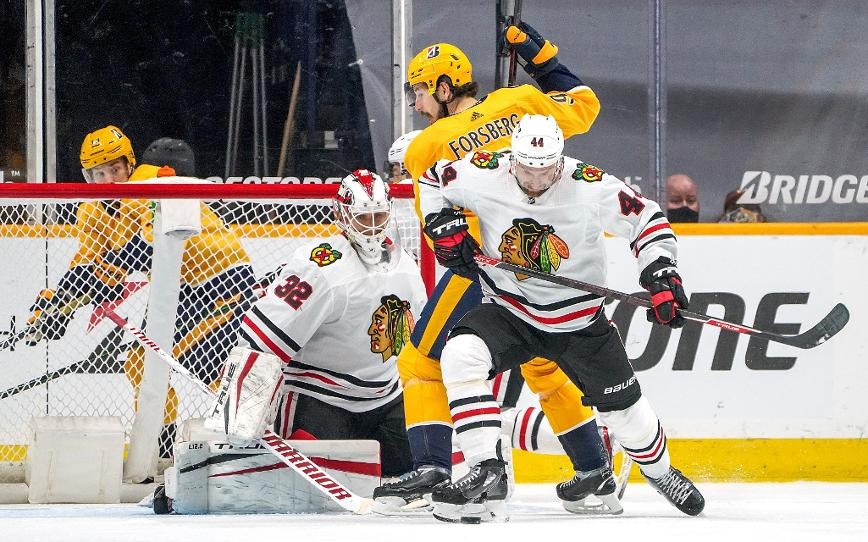 On Tuesday night, the Blackhawks allowed 17 shots in the first period. Nashville finished the game with 39; Chicago generated 20 in 63+ minutes.

Malcolm Subban did a terrific job, but playing back-to-back nights meant someone else was likely getting the call on Wednesday. The Blackhawks looked to change things up with Kevin Lankinen back between the pipes after a strong weekend against Detroit.

Initially, the plan was to have Nicolas Beaudin replace Lucas Carlsson on the blue line. However, those plans were tossed out the window when Chicago lost forward Lucas Wallmark to the COVID-19 Protocol list a couple hours before the puck dropped. Carlsson stayed in the lineup and Beaudin also dressed, giving the Blackhawks seven defensemen active for the game.

The Blackhawks came in with points in their last four games. More impressively, Chicago had a power play goal in all seven games to start the season. Would either (both) of those streaks continue?

Dante Fabbro did the Blackhawks a favor and went to the box only 3:24 into the game. Ian Mitchell was called on during the power play, something he hasn’t been asked to do much early in the season. Chicago failed to score, however.

Mattias Janmark was caught hooking 11 minutes later. For a fun change of pace, Mitchell’s number was called during the penalty kill and he did a nice job. Nashville failed to score on their power play.

When 20 minutes of hockey had come off the clock, each side had been credited with only five shots on net. The score was tied at zero. And a national television audience was finding the cure for insomnia.

Mitchell skated the least ice time among all Hawks defensemen (3:31) in the first period. But he did get in on both special teams. Baby steps…

As much as the Hawks did a decent job limiting shots on net in the first period, the second felt like the first on Tuesday night.

Thankfully, Nick Cousins handled the penalty kill on behalf of the Blackhawks when he went to the box 29 seconds into the advantage. Neither team scored during the overlapping penalties, but when the dust settled the Predators were out-shooting the Hawks 8-1 after 11 minutes in the period.

Nashville kept the pressure on the Blackhawks but Lankinen continued to make save after save. Chicago got another crack at the power play when Viktor Arvidsson went to the box at 13:56 but were held scoreless once again.

The best offensive attack for the Blackhawks came in the final seconds of the second period. Patrick Kane had a couple good looks and Mitchell set up Kane for a snipe as the final horn sounded on the period. None of them found the back of the net and we were still staring at doughnuts on the scoreboard after 40 minutes.

Nashville had a 19-15 shot advantage after two periods. Even with seven defensemen dressed, Keith, Connor Murphy and Calvin de Haan were over 15 minutes of ice time already after two periods while Mitchell and Beaudin were both at only 6:51 and nine shifts each.

Maybe the biggest issue was at the dot: Nashville won 73 percent of the faceoffs over the first two periods.

The third period started in a similar fashion to the second, and it was only a matter of time until a puck found the back of the net. Chicago put together a couple strong shifts but a turnover wound up in the net behind Lankinen. Cousins scored at 5:24 into the third.

With the shots 27-16 in favor of Nashville six minutes into the third – 32 seconds after the Cousins goal – Filip Forsberg tripped Kane and Chicago got a much-needed power play.

Nashville killed the penalty and Forsberg came out of the box, immediately picked de Haan’s pocket and took the puck the other way on a breakaway. Lankinen made a marvelous save to keep the Hawks within one after an empty power play almost ended in disaster.

Nashville’s Finnish netminder, Juuse Saros, was having a strong game of his own for Nashville and made a few enormous saves after the Forsberg opportunity.

Leave it to the fourth line to make something happen for the Blackhawks. Brandon Hagel grabbed a loose puck, starting a rush that ended with Ryan Carpenter slamming home his first goal of the season to tie the game at one.

Hagel and David Kampf picked up the assists, the first career NHL point for Hagel.

Nothing can ever be easy, though. Dylan Strome went to the box for hooking less than two minutes after the Hawks tied the game. The Blackhawks were able to battle through the penalty kill and survive.

Neither side was able to break through but in the closing seconds of regulation, Murphy and Dante Fabbro got tied up and went into the net hard. Fabbro stayed down and the skaters on the ice gathered to exchange pleasantries. Fabbro went to the room with 2.4 seconds left in regulation. No penalties were called.

The clock expired and the teams headed to overtime tied at one.

When the dust settled, the scoreboard read 21 shots for Nashville – in the third period. The Preds were officially credited with 40 shots in regulation; Lankinen stopped 39 of them. Chicago had 25 shots on net through 60 minutes.

After a defensive lapse cost the Blackhawks the game in overtime on Tuesday, how would the Hawks respond in this game?

Kane got a great look at the net 59 seconds into overtime but the shot went wide. Chicago spend most of the first 90 seconds of overtime with the puck but didn’t score.

When Nashville got the puck into the zone and both teams changed, the Blackhawks did a much better job of rotating with the puck defensively. Pius Suter was out with Strome and the movement was noticeably better than the previous night.

With 1:38 left in overtime, a pass attempt from Mattias Janmark intended for Kane hit a defender’s skate and bounced off the post. Janmark then shot the rebound wide of an open cage. Another opportunity lost.

The Predators showed zero sense of urgency in the final 12 seconds of overtime with the puck, allowing the clock to run out and sending the game to a shootout.

Officially for the night, Lankinen made 41 saves against 42 shots in the 65 minutes of hockey. Chicago was credited with five more shots on net in overtime to give them 30 in the game.

But a skills competition would decide the recipient of the second point.

Lankinen stoned Forsberg’s attempt to begin the shootout. Kubalik shot for first Chicago and was stopped as well. Matt Duchene was up second for the Preds and he was able to dangle Lankinen and score. Kane was up for the Hawks but he wasn’t able to score. Ryan Ellis was denied by Lankinen but Janmark wasn’t able to score.

Nashville emerged with a 2-1 win.

Mitchell had the fewest shifts (13) and ice time (9:47) on the blue line for Chicago. He was credited with two blocked shots.

Kane led the Blackhawks in ice time with 27:17. He was credited with four shots on net and another five attempts that missed in an active night with Chicago only dressing 11 forwards. Kubalik led Chicago with five shots on net.

Both teams were 0-4 on the power play, ending the Blackhawks’ season opening streak. However, the Blackhawks have now put a point in the standings in five straight games.