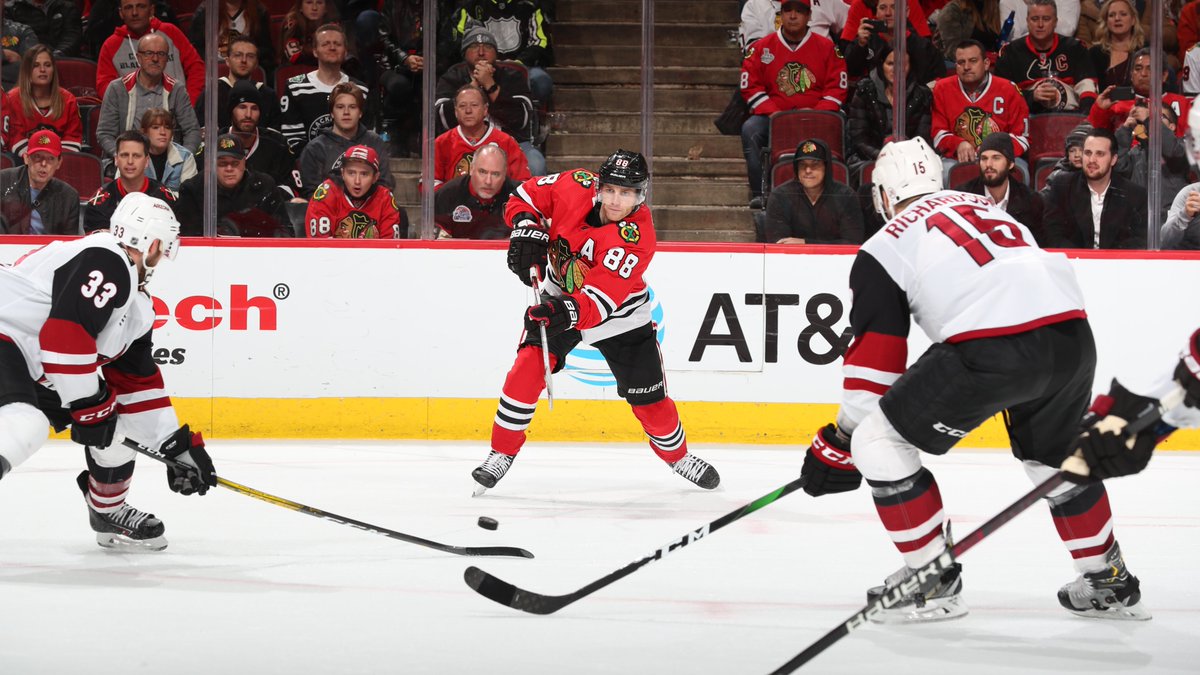 Nick Schmaltz returned to the United Center on Sunday evening but the story was Robin Lehner exceptional play for 65 minutes – and continued struggles in the shootout.

The Blackhawks put on the show in the first period. It took only 53 seconds for Chicago to get on the board when Jonathan Toews made his sixth deposit of the season.

Alex DeBrincat stayed hot with a gorgeous power play goal at 8:40 into the first.

Toews and Patrick Kane were credited with assists on the DeBrincat goal.

Christian Fischer cut the lead in half at 11 minutes but Chicago extended the lead late in the first on Dominik Kubalik’s seventh of the season.

After 20 minutes the Coyotes had a 16-11 shot advantage but trailed 3-1 on the scoreboard.

The Hawks’ penalty kill fell apart in the second. Conor Garland scored a power play goal at 6:32 and then Carl Soderberg scored with the advantage at 8:53 to tie the game.

Arizona out-shot the Hawks 11-9 in the second period.

In the third the Blackhawks’ offense was non-existent and it took another terrific performance from Lehner to get one point in the standings. Lehner stopped 17 shots in the third period, including a Hasek-esque save on a Clayton Keller shot that brought the home crowd to its feet. The shot totals were 44-25 after 60 minutes of hockey but Lehner kept the Hawks in it.

Lehner made three more saves in overtime – including another incredible save that should qualify for the league’s top plays of the weekend – but the Hawks couldn’t beat Darcy Kuemper and the game went to the only part of the game where Lehner has consistently struggled this year: the shootout.

Toews’ shot went wide to open the shootout and Kirby Dach, the Hawks’ third shooter, was stopped and Arizona escaped with the win.

Toews had another big night. He won 10 of 13 faceoffs and had three points (one goal, two assists).

Dennis Gilbert skated 11:43 but had 17 minutes of penalties from a fight with Jason Demers in the second period. Demers hit DeBrincat from behind in front of the Arizona bench in a dangerous way and Gilbert came to his teammates’ defense. The bench applauded him stepping up; he gave Demers a pretty good beating. Gilbert was credited with five hits in the game.

Calvin de Haan and Zack Smith were credited with five hits each as well.

Connor Murphy carried the mail on the blue line, skating 27:47 of which 7:51 was short-handed. He had one assist, led the Hawks with four blocked shots and also picked up two hits and one takeaway.

Dach was limited to only nine shifts and 8:01 on the ice in the game. But Jeremy Colliton was confident enough in the rookie to call on him in the shootout.