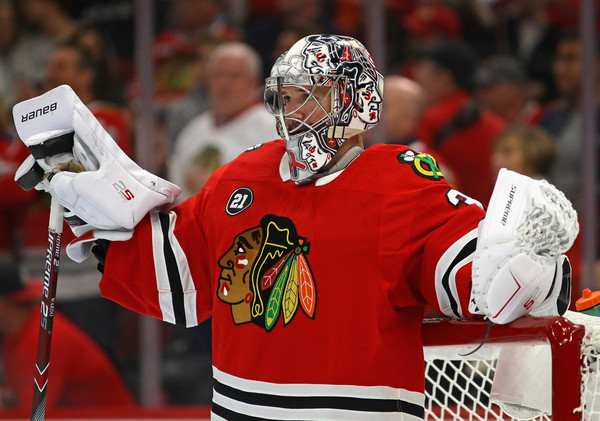 After Corey Crawford played a marvelous game in Columbus on Saturday night, Ward had the… unique privilege… of playing behind an absolute garbage fire on Sunday evening.

Nikita Kucherov opened the scoring with his second of the year at 3:21 into the game.

The breakaway was a great play and terrific shot for Fortin who had was could have been his first goal credited to Marcus Kruger on Saturday; Kruger did redirect the shot.

After 20 minutes the game was tied at one.

We won’t spend much time on the play-by-play. The second period felt like a preseason game with the soon-to-be AHL squad taking on the starters on the other end. Tampa Bay established a new Expansion Era record by putting 33 shots on net in the second period alone. The Blackhawks barely touched the puck and Ward suffered the consequences.

The @TBLightning recorded 33 shots on goal in the middle frame, the most by a team since 1997-98 when shots by period became an official NHL statistic.

After 40 minutes the Hawks trailed 4-1. And they were fortunate to be within three.

When Victor Hedman made it 5-1 in favor of the visitors at 9:31 into the third it would have been hard to find fault in folks at the United Center heading for their cars.

But the Hawks didn’t go away quietly.

David Kampf scored his first of the year on an awkward play at 15:17. The puck hit an official and bounded into the Lightning zone where Kampf put it home.

After the goal Louis Domingue completely lost his shit and was called for unsportsmanlike conduct penalty. He unloaded on the goalpost and shattered his stick, earning a teammate two minutes in the box on his behalf.

On the power play for the Domingue penalty, Joel Quenneville pulled his goaltender with more than four minutes left in regulation.

Nick Schmaltz fired a shot that appeared to either go in or be saved, depending on which team you favor.

Domingue caught the puck, but he did so behind the line. Schmaltz knew it, Patrick Kane knew it, and soon those remaining in their seats at the United Center knew it. A video review confirmed the goal for Schmaltz and suddenly it was 5-3.

The comeback wouldn’t be complete, though. Tampa added an empty net goal to make the final score 6-3.

Tampa finished with 55 shots on net, scoring five against Ward who made 53 saves.

One positive from the game was Brandon Saad showing up. Finally, eight games into the regular season, Saad competed his ass off.

Kane had the only assist for a Blackhawks forward in the game. Jan Ruutta had two helpers while Duncan Keith, Henri Jokiharju and Brandon Davidson were credited with one assist each.

Jonathan Toews won 12 of 16 faceoffs but his line with Alex DeBrincat and Dominik Kahun failed to register a point. Toews led Chicago skaters with five shots on net in the game.