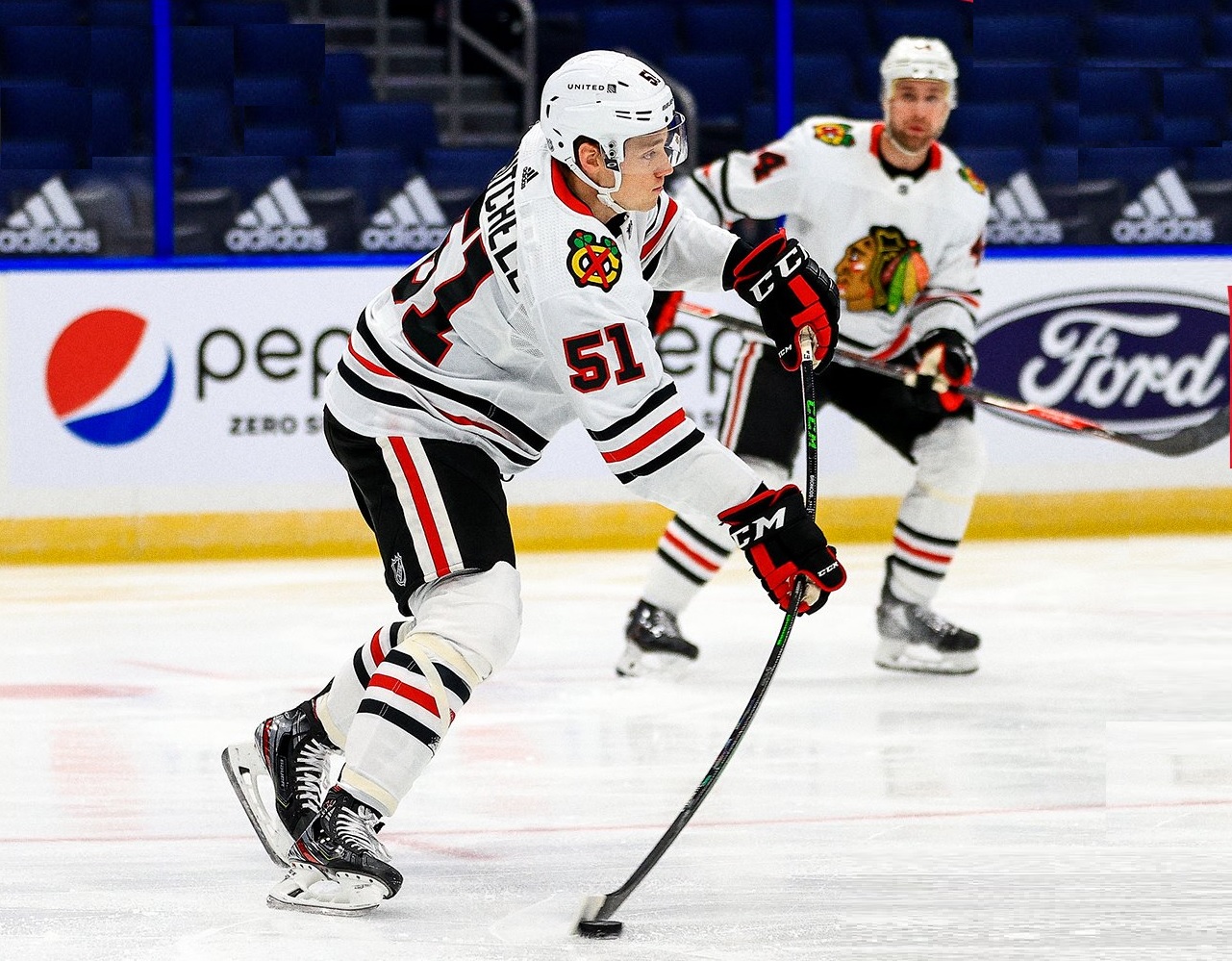 The new-look Blackhawks took the ice for their first game of the abbreviated 2021 regular season in Tampa against the defending champions.

With all of the players come and gone (and missing), there were certainly times that fans needed to check the roster to remember which numbers and players were on the ice. Here’s how the Hawks started the game:

#Blackhawks lines the first time through the rotation:

The Blackhawks got the first power play of the game. The new-look units were:

Tampa quickly got the next power play (31 seconds after the Hawks’ power play came up empty) and Ondrej Palat put Tampa on the board first.

Palat was posted up on the doorstep between Duncan Keith and Connor Murphy. The goal came 31 seconds into the advantage for Tampa.

At 16:18 into the first Mathieu Joseph made it 2-0 Tampa. Not a great look from Malcolm Subban, who was fighting it in his first start of the year.

At 17:57 into the first Anthony Cirelli redirected a shot by Erik Cernak into the net to make it 3-0 Tampa. The shot was well wide of the net but Cirelli made a terrific play to beat Subban. Cirelli and Alex Killorn (assists) had two points inside two minutes of hockey.

Palat went to the box with 48 seconds left in the period, which was a huge help for the Hawks. On the play, a shot from the point beat Subban for what would have been a fourth Tampa goal, but the penalty took the goal off the board.

The first period came to an end with a thud. Chicago had power play time carrying over to the second but they were chasing three goals. Subban didn’t look great, either. Chicago was out-shot 13-8 in the first.

Ian Mitchell, making his NHL debut, skated 4:12 in the first period with one hit. That was the lowest ice time among Chicago’s defensemen.

Subban settled in and started the second period well. Unfortunately the same can’t be said for the Blackhawks offense, which was non-existent. Staying out of the box would have helped. Adam Boqvist took a seat at 4:01 and the Hawks had to desperately kill off two minutes.

When Keith went to the box at 9:01 the Hawks weren’t as fortunate. Steven Stamkos posted up in his usual spot and rifled a shot into the back of the net to make the score 4-0 Tampa. Subban didn’t have a chance; you simply cannot leave Stamkos alone in the circle but the Hawks did and paid for it.

The second period ended with that being the score.

Chicago had four blocked shots through 40 minutes of hockey – three of them from Keith. The Blackhawks’ defensemen accounted for three shots on net in the first two periods; two from Keith, one from Nikita Zadorov.

Mitchell was at 10:20 through two periods – still the lowest on the blue line.

The lowest ice time on the roster through two periods belonged to Dominik Kubalik (7:07).

Patrick Kane led the Blackhawks with three shots on net through two periods. Chicago was now getting out-shot 26-16 after another 13-8 period.

Subban made a few huge saves early in the third but the Blackhawks simply didn’t generate any offense whatsoever.

When you can’t control the puck, you start chasing and that’s precisely what the Hawks were doing. And it caught up with them. Stamkos took a victory lap and found Brayden Point for Tampa’s fifth goal of the night at 6:45 into the third. The assist was Stamkos’ third point of the evening.

At 16:36 into the third Dylan Strome scored the first goal of the season for the Blackhawks. The goal came on the power play and was unassisted.

That would close the scoring for the night. 5-1 was the final.

Mitchell looked solid. He skated only 16:59, the lowest on Chicago’s blue line, and was credited with one shot on net, two missed shots and one hit.

Kubalik skated only 11:32 and was credited with zero shots on net.

These two teams play in Tampa again on Friday night.