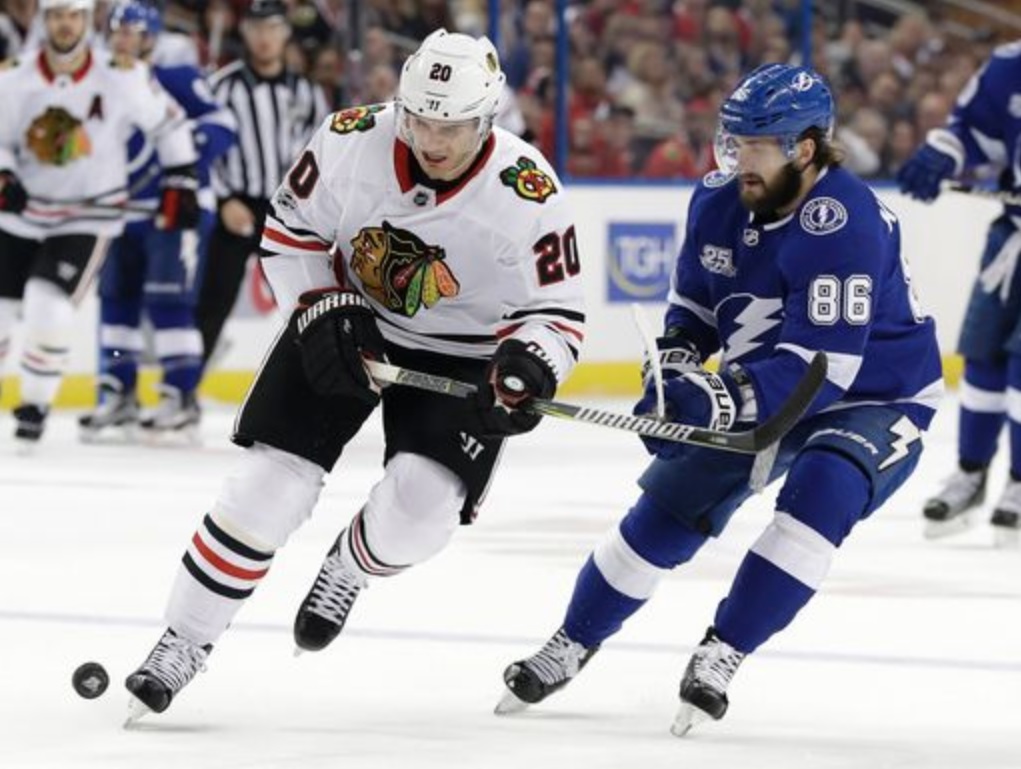 Tampa Bay came into Wednesday night’s game with the best power play in the NHL, the hottest offense in the league, and speed everywhere.

Chicago came in having won three of four but with some issues still being sorted out. The offense was improving; the defense has had its moments.

So it would figure that the Blackhawks would go out of their way to spend a significant part of the early going short-handed… and survive.

Patrick Kane opened the scoring 3:49 into the game with a wicked snipe.

Exactly two minutes after Kane scored, John Hayden caught JT Brown with a high stick and was sent off for four minutes. With 44 seconds left on the second Hayden penalty, Jonathan Toews joined him in the box.

So the Hawks are up one with two players – including their captain – in the box, and would have almost a full six consecutive minutes of short-handed play.

Not only did the Blackhawks kill off all three penalties, but they were then granted an extended two-man advantage a few minutes later. Yanni Gourde and Victor Hedman went to the box 21 seconds apart and the Blackhawks were able to do what the Lightning could not: score on the power play.

And it was Kane again.

With all of the special teams time in the first period, Chicago wound up with a 13-11 shot advantage and a 2-0 lead on the scoreboard.

Chicago got another power play early in the second, but it was Tampa getting on the board. Ondrej Palat scored a short-handed goal to cut the Hawks’ lead in half. The pace and physicality of the game increased in the second period, and the speed of Tampa started to show.

There were good chances on both ends of the ice, but the shots were only 10-6 in favor of Tampa in the second period.

But the Bolts carried momentum over into the third, and Chris Kunitz tied the game 31 seconds into the period.

From there, it was all about the goaltenders.

Corey Crawford and Andrei Vasilevskiy were equally magnificant in the third period and into overtime. Early in the extra session both teams had breakaways, with Kane getting loose for what was almost a shootout-caliber chance but Tampa’s netminder was on point.

Unfortunately for the Blackhawks, Nick Schmaltz was caught slashing 3:10 into overtime and even on a very good night, Chicago couldn’t keep Tampa’s power play off the board again.

Brayden Point put home the game-winner 15 seconds after Schmaltz went to the box.

Crawford made 35 terrific saves to take the tough loss; Vasilevskiy stopped 29 in the win.

Artem Anisimov, Duncan Keith, Jan Rutta and Cody Franson had assists on Kane’s two goals. Brent Seabrook led the Hawks with three blocked shots. And Lance Bouma led the way with four hits. Toews won half of his 22 faceoffs while Anisimov won 11 of 17.

While a loss isn’t the preferred outcome, the Blackhawks killed five of six power plays against a unit that has been overwhelming over the past month. Against one of the best teams in the league, the Hawks were an overtime penalty away from potentially winning a dramatic game.