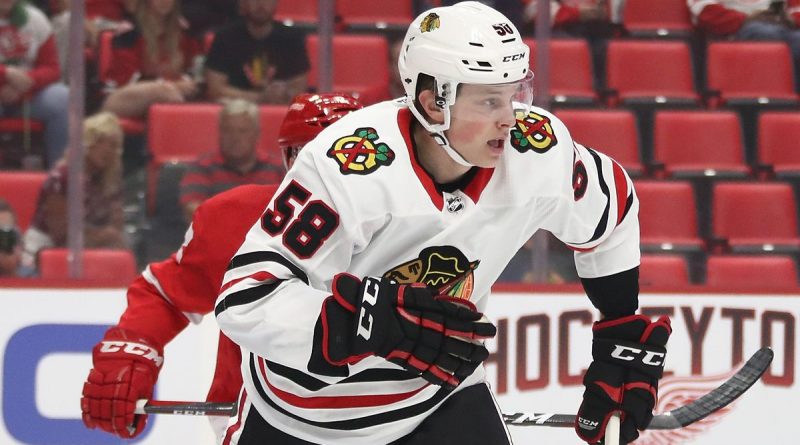 The Blackhawks have plenty of roster decisions coming in the next few days. Stan Bowman had his most aggressive offseason to date, finally having cap space to play with and young pieces to integrate into his NHL roster.

Now the fight for ice time is going to leave a few worthy players in Rockford… unless Bowman can work out a trade (or three) to make room for the right players. Because, after all, if the goal is to win games, the best players should be on the NHL roster.

And what has become abundantly clear during the Blackhawks’ preseason games thus far is that MacKenzie Entwistle should be on the Blackhawks’ roster. He’s one of their 12 best forwards.

Here are Entwistle’s lines from his preseason games.

OK, so maybe he’s not a center. The Blackhawks have too many bodies there already, so that isn’t a deal breaker.

On Thursday night against the Wild with a roster of mostly show-me players trying to earn a roster spot, head coach Jeremy Colliton increased his ice time by almost 50 percent from his two other games (with a box score). Minnesota, on the other hand, rolled out mostly their NHL roster.

Here’s what Colliton had to say about Entwistle and Brandon Hagel, who have looked really good together.

And here’s what Hagel had to say about Entwistle.

There’s confidence in how this young player is performing. And there should be.

Entwistle, who is still only 22 years old, was originally a third-round pick (#69 overall) by Arizona in 2017. The Blackhawks acquired his rights in the trade that sent Marian Hossa’s contract and Vinnie Hinostroza to the Coyotes in 2018. He was an intriguing prospect then because of his size (6-3, 180).

In his first professional season in Rockford (2019-20), Entwistle scored 11 goals with 15 assists in 56 games before the pandemic cut the season short. Last year he saw action in five NHL games with the Hawks and scored once with one assist. He looked young, but did not look out of place.

This preseason he has shown he’s ready for the NHL.

So… the obvious follow-up question is: who doesn’t make the roster so he can?

Here are the 12 forwards I would have on the Blackhawks’ roster for opening night:

The odd men out would be Dylan Strome, Alex Nylander and Jujhar Khaira.

Strome has been trade bait for a year and is still on the market. The question is whether or not the Blackhawks can make a deal of significance with a player who has some skill but just doesn’t fit Chicago’s current roster. He can still be a 40-50 point player in the right system; he has shown that in the past.

Nylander is still rehabbing from injury and just isn’t back at full strength yet. Colliton said it’s a tough decision with him because he’s healthy enough to be active but not there yet for an NHL roster spot. He would have to clear waivers to go to Rockford… if he isn’t traded. And someone might take a shot on Nylander for nothing if he does go on waivers.

The big question for a lot of the offseason and preseason has been where/how Khaira fits on the Hawks’ roster at the NHL level. He got a two-year deal from Bowman and his stat line shows lots of hits. OK, so he brings the sandpaper that some people crave.

My question has always been: does he do anything Hardman doesn’t? After watching the preseason, the answer to that is no.

Scott Powers at The Athletic did a great job of breaking down some of the financial drivers in the Blackhawks’ roster decisions in the coming days. How they weaponize their LTIR space with Andrew Shaw and the bonuses some of the prospects could be due will make for a few eyebrow-raising paper moves between now and the Blackhawks’ first game of the regular season.

But, again, if the goal is to have the best 12 forwards on the NHL ice, Entwistle should be one of those 12 players.

13 thoughts on “MacKenzie Entwistle Should Make The Blackhawks Roster”