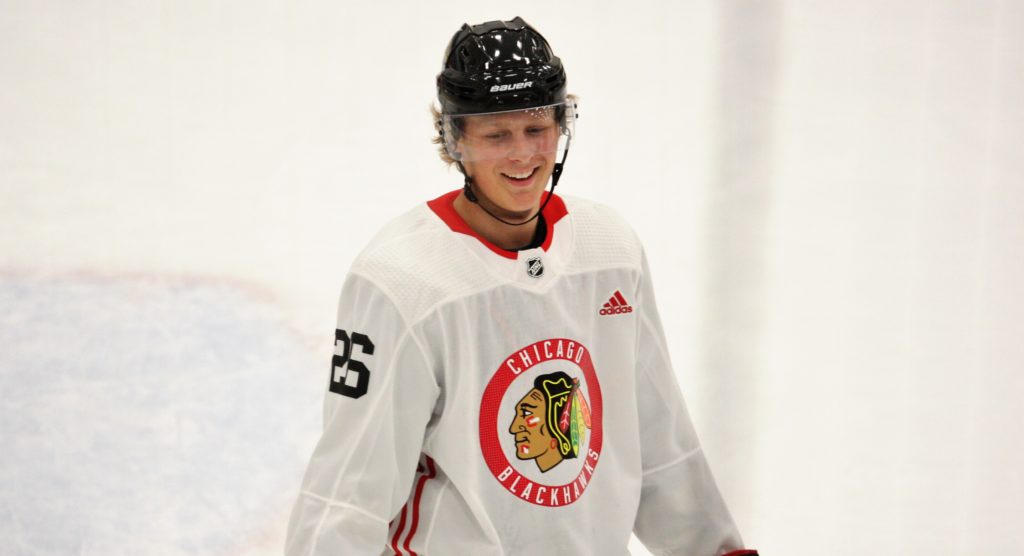 Earlier this weekend, The Sporting News offered their rankings of NHL organizations’ prospect depth. After a couple drafts that many have felt were strong, the Blackhawks showed up an intriguing 23rd overall.

Here are their thoughts on the current state of the Hawks’ system:

The Blackhawks’ season was the hockey equivalent of a cold shower, as they missed the playoffs for the first time in 10 years. Little by little, however, they’ve drafted and developed NHL-caliber players, albeit none of their current kids are on the level of a Patrick Kane or Jonathan Toews. The strength of the Hawks’ farm system lies within the defense, which is led by four blue-chip rearguards acquired with their top two picks in each of the last two drafts. Swedish wunderkind Adam Boqvist highlights this talented group of defenders for his obvious flair and blistering shot. But don’t overlook playmakers like Nicolas Beaudin, Ian Mitchell, Henri Jokiharju and Ryan Shea. All four can run a power play, and the law of averages says at least one of these kids will be worthy enough to one day replace Duncan Keith.

Their top ten Blackhawks prospects were:

These rankings came at the same time The Athletic published a confidence study of NHL front offices – in the eyes of the fans. Not surprisingly, the Blackhawks did not grade well; after missing the postseason for the first time in a decade, many have been critical of the job done by Stan Bowman and company of sustaining the team’s championship window since last winning a Stanley Cup championship in 2015.

Chicago ranked 25th in this poll. Here are the comments from their polls of the public and fans:

“Chicago’s front office may get a lot of flack for trades like Panarin for Saad and handing out contracts like Seabrook and it is all deservedly so. The issue with how people perceive Chicago’s front office is there is not enough realization to how well they have drafted over the past few years.”

“Stan Bowman has entirely lost the plot and has no idea what he is doing. Bad trade after bad trade.”

Oh, how the mighty have fallen. It was only a few years ago that the Blackhawks organization was seen as the class of the league, but the team has really fallen since then after two quick playoff exits and not making it last season. The team used to expertly navigate their impending salary cap doom caused by their talented depth, but lately it’s been a series of questionable decisions made to get out of the team’s loyalty-based self-inflicted cap hell. That loyalty has also been at the forefront of the team’s failed “bringing the band back together” experiments. Still, some credit has to be given to the team’s recent drafting record, finding an abundance of quality NHL talent despite a lower than average draft slot.

That piece did not rank the Blackhawks top prospects, but Scott Powers updated his rankings after the prospect camp in July. Here are his top ten:

So what do we make of the future of the Blackhawks? Defensemen figure prominently in both top ten lists. The name many have focused on since the draft is Boqvist. Corey Pronman of The Athletic spoke to Tomas Monten, Sweden’s coach for the U20 roster about a number of topics, starting with Boqvist. Here’s a selection of the interview:

Corey Pronman: Adam Boqvist  was the best defenseman at the U18s and a top 10 pick. What are your thoughts on what he brings to your team?

Tomas Monten: He’s a skilled offensive defenseman. If we don’t have Timothy Liljegren [the 17th overall pick by Toronto in 2017] or Erik Brannstrom [the 15th overall pick by Vegas in ’17), he’s our No. 1 defenseman on our power play and offensive side. We’ll see how he looks. He’s one year younger [than the age group] but still he was with the U20 team in November last year and was in the run for the world juniors last year. Hopefully he can use that experience and try to lead this team in an offensive way.

CP: Historically for guys who have been very high picks out of Sweden, it’s unusual they have played their entire season at the junior level. Where do you think his development is in terms of his all-around play and his ability to play at a faster pace?

Monten: Last season was up and down for him. He played a lot of junior, didn’t play a lot of senior games, but he was really good when he played on the national team both at the Ivan Hlinka and the Under-18 World Championships. He’s going to London, we’ll see how it goes, it will be a little different for him. I don’t know how good London is this year, but my understanding is they always have a top team. Personally, I love Mitchell’s game; he’ll be back at Denver this season but could be a contract candidate in April. With the depth of the system, Chicago will have options on the trade market before and during the 2018-19 season. Shea made the top ten for The Sporting News but ranked 49th on Powers’ list, which is interesting.

The forward group is where many fans see an immediate need for an injection of quality players under affordable team control and the top end doesn’t appear to be there. Dylan Sikura appears to be set to join the NHL roster to open the season and, if the optimism and confidence of the front office (echoed by many like Powers) is to be believed he has the potential to be an impact forward soon. He could join 20-year-old Alex DeBrincat, who is coming off a 28-goal rookie campaign, in the top six this year.

The interesting name missing from Powers’ top ten is Altybarmakyan (he came in at 11). Powers has been out in front of the 19-year-old as a prospect with a high ceiling from the jump; he’ll play in the KHL again next year.

One name that’s jumped up on most radars since the draft is Wise, the Hawks’ third round pick (#69 overall) this summer. He’ll play at Boston University with Chad Krys this season and looked really good at prospect camp.

There are some good reinforcements coming to help Chicago in the future, but the issue is filling the gaps in the coming season. Up front, Sikura, Ejdsell and John Hayden figure to be in the mix for the NHL lineup with Ejdsell and Hayden bringing some much-needed size. Forsling, of course, will miss his chance to make the NHL roster out of training camp because a wrist injury will sideline him until November. It would appear that injury will open the door for Jokiharju to get a long look in training camp.

If/When Shalunov comes to the NHL continues to be a wild card.

The good news is the Blackhawks do have some solid players in the organization and they’re deep on the blue line, which should help their ability to make trades in the coming year.

But the logjam with adding veteran free agents over the last two years continues to limit the coaching staff’s ability to give young players a long look. Vinnie Hinostroza, who had a nice season last year, was traded out of town this summer and the Hawks brought in Chris Kunitz to do something.

The next generation coming to Chicago could be good. But how the 2018-19 season plays out might determine if Bowman and/or Joel Quenneville are around to coach the prospects.

95 thoughts on “What To Make Of Chicago’s Next Generation?”