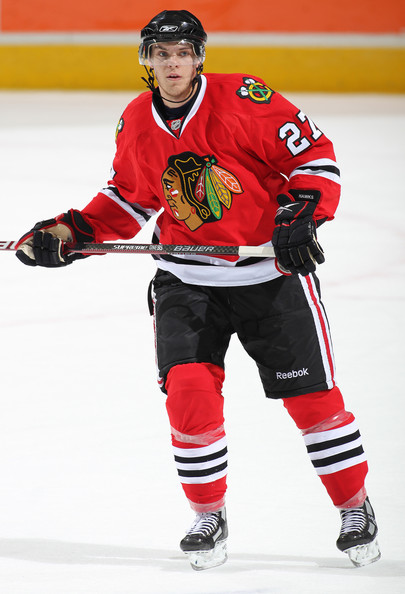 With Marian Hossa, Fernando Pisani and Patrick Kane all (hopefully) coming back soon, the Blackhawks are going to have to make a decision on the immediate future of top prospect Jeremy Morin.

Does he stay with the big club in the NHL, where he’s certainly shown he’s able to be a solid contributor, or does the team go with the veterans they have under contract?

What adds intrigue to Blackhawks trade speculation is that GM Stan Bowman told the Daily Herald earlier this week that he’s looking to upgrade the Hawks defensive group and add depth at the center position.

One option to help the blue line is already under contract. Top prospect Nick Leddy, who started the year withthe Hawks, will get a shot at making the USA team for the World Junior Championships later this month, and could get another, longer look in Chicago soon. He’s a smaller, quicker defenseman who is closer to Duncan Keith or Brian Campbell in skill set than Brent Sopel. He could turn around the puck possession issues the Hawks have had in the defensive zone by giving coach Joel Quenneville another option.

But, again, his cap number is such that a move would have to happen.

An option at center, which was addressed by Bowman with the Daily Herald, was Ryan Johnson. The former-Canucks center signed a professional tryout contract with the Hawks and is currently in Rockford, and is considered a faceoff specialist.

But, again, he would come with a cap number that would force another move to happen.

So how do the Blackhawks fix their blue line, add depth at center, and keep Morin in the NHL?

The Hawks are probably going to have to explore the trade market. The most likely players to be dealt are those that will become a free agent after this season. Unfortunately for Blackhawks fans, the list of would-be free agents is a long one again this summer. Here’s the list, with the player’s cap number and free agent status after the year:

Obviously, Seabrook is the last player on this list that could be dealt. And Brouwer will be an interesting player to watch next summer, but shouldn’t be considered trade bait now. He’s continuing to provide the only consistent power forward presence on the roster, and could be on his way to a second 20-goal season. His long-term future in Chicago might be in question based on cost, but he should be in Chicago for the rest of the season. (read: Andrew Ladd, one year later.)

While fans can rest assured that players like Kopecky, Cullimore, Boynton, Hendry and Pisani will be at the bottom of the list of players to come back next year, the organization will have some tough decisions to make with players like Crawford, Skille and Dowell, that have been with the organization for some time and are contributing at the NHL level now. Stalberg will also be an intriguing player to keep around; his skill set is outstanding, but his effort has been touch-and-go.

The bigger issue, though, is that the Blackhawks have four players – Cullimore, Boynton, Hendry and John Scott – that are nothing more than a 6th defenseman/13th forward. These are the four players the Hawks need to improve. If Scott is going to be around for nothing more than fighting, that’s fine… but he needs to be the 19th player on the roster.

Which brings us to the players that could be moved.

Cullimore has a two-way deal, which means he could be sent to Rockford without the potential of losing him in the waiver process. The problem with that is, frankly, Cullimore has been better than Boynton and clearly has more trust (and respect) from Quenneville.

If the Hawks tried to slide Boynton or Hendry through waivers, they would run the risk of having another team claim him and the Hawks could get stuck with half of that player’s salary still hitting their cap. Conventional (and cynical) wisdom would say “If Hendry isn’t playing anyway, why not cut the cap number in half?” It would be preferred to get the entire cap number off the books, though.

There are teams, especially in the Eastern Conference, that need shot-blocking defensemen and might be willing to move a mid-level (read: 4th round or lower) draft pick for a player like Boynton or Hendry. While that wouldn’t add the NHL-experienced defenseman that Bowman would prefer, making space for Leddy (both on the roster and financially) would improve the blue line.

A deal with a struggling team like the Washington Capitals might be fairly easy to complete. And while the Caps already made a move to bolster their defense by adding Scott Hannan from the Avs, their losing streak seems to indicate that they may still be looking for help on the back end. After all, a 7-0 loss to the Rangers isn’t going to make any coach, or GM, happy.

The best player to deal would be Kopecky. Kopecky, a defensive forward in the final year of a deal with a cap number of $1.2M, is having the best offensive season of his career. He has only three goals in 31 games (Morin has two in eight), and he has the worst plus-minus of all Hawks forwards (-9), but his 14 assists are already a career best.

For a player with two rings and that cost, Kopecky could draw interest from a number of teams, especially considering the Hawks would likely be looking for minimal compensation.

As the Christmas trade freeze comes, watch for the Hawks to start popping up in rumors.