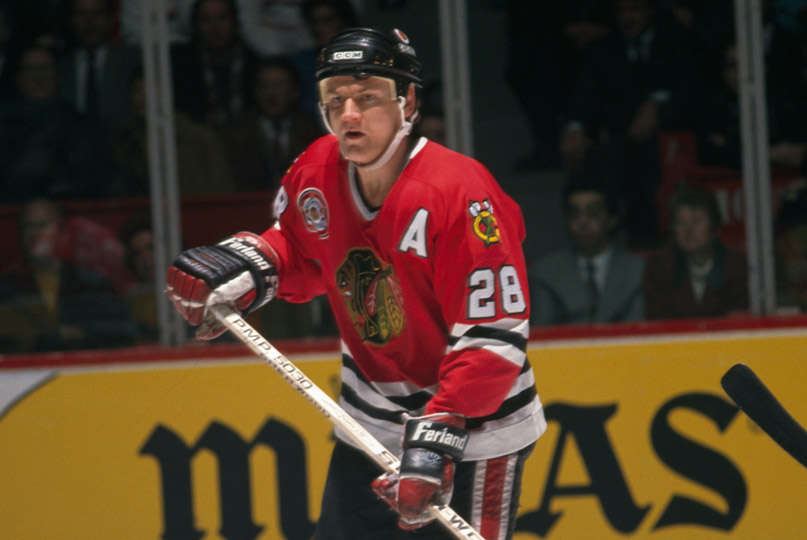 On June 24th the Hockey Hall of Fame will announce its newest inductees. There are many individuals who are worthy of consideration. Among those who have been passed over who should be in the Hall is Blackhawks legend Steve Larmer.

Larmer was, with Denis Savard and Doug Wilson, the identity of the Chicago Blackhawks during the 1980s. He didn’t miss a game for a decade, and each of his NHL seasons was followed by a playoff appearance.

Larmer won the Stanley Cup with the Rangers. He also won the Calder Memorial Trophy and was named the NHL “Man of the Year” by The Sporting News after the 1990-91 season. He played in 884 consecutive games and 13 consecutive postseasons.

In 2014 when Blackhawks star Marian Hossa reached 1,000 points in his Hall of Fame career, Ken Campbell at The Hockey News compared Hossa’s career to Larmer’s. At the time, Campbell wrote of Hossa:

“Perhaps a better comparison would be Steve Larmer, another player who excelled at both ends of the ice without winning a Selke Trophy and won one Stanley Cup during his career. Despite the fact his name seems to come up every year, Larmer isn’t in the Hall of Fame yet and may never find his way there.”

Let’s compare Larmer to a few right wingers who are already in the Hall.

St. Louis has more individual accolades than Larmer. He won the Hart Trophy in 2004, was the winner of the Lady Byng three times and the Art Ross Trophy twice. He appeared in five All-Star Games.

Lanny McDonald was inducted into the Hall of Fame in 1992 after a stellar career that included exactly 500 goals in 1,111 games. Like Larmer, he won one Stanley Cup (with the Flames in 1989).

However, McDonald averaged less than one point-per-game over his career, and had fewer game-winning, powerplay and short-handed goals than Larmer in spite of playing 105 more regular season games in his career. Larmer, a point-per-game player in his career, was also plus-204 against McDonald’s career plus-41.

Joe Mullen was inducted in 2000. He, like McDonald, reached the magical 500 goal mark just as his career was ending, scoring 502 total.

Mullen, like Larmer, was a point-per-game player throughout his career; Mullen registered 1,063 points in 1,062 games. And Mullen had more game-winning goals (73) than Larmer (60). However, Larmer had more powerplay goals and short-handed goals than Mullen.

Mullen won three Stanley Cups, one of which was with the 1992 Pittsburgh Penguins at the expense of Larmer’s Blackhawks. He also won the Lady Byng twice, and is remembered as one of the best American-born goal scorers ever. Mullen’s career point share (91.1) was just better than Larmer’s (88.1).

Cam Neely‘s named was called in 2005 after a career that was spent mostly in Boston. Obviously Neely played a more physical game than Larmer; he eclipsed 100 penalty minutes in a season six straight seasons, while Larmer never had more than 79 PIM in a season.

But Neely, like McDonald, was not a point-per-game player throughout his career. Neely was money when it counted most – 61 game-winning goals in only 726 career regular season games – but had only one short-handed goal in his career, and his total point share of 69.2 is among the lowest in the Hall. Also, Neely never won a Cup as a player.

Glenn Anderson was inducted in 2008, and benefited from playing on the dominant Oilers teams of the 1980s with Kurri, Mark Messier and Wayne Gretzky. He won six Cups, five with the Oilers and one as Larmer’s teammate on the Rangers in 1994.

Anderson did not win a single individual award during his NHL career, and failed to reach the 500 goal plateau. He wasn’t a point-per-game player, either, finishing with 1,099 points in 1,129 regular season games.

Interestingly, Anderson finished with the same career point share as Larmer (88.1) and is the only right wing we’ve listed here that, like Larmer, had a career plus-minus over 200 (Anderson was plus-201, Larmer was plus-204).

There are two major differences between three of these four right wingers and Larmer. One is their place in the Hall of Fame. The other: their number has been retired. Neely’s number hangs in the rafters in Boston, Anderson’s number was retired by the Oilers and no Flames player will ever wear McDonald’s number again. Only Mullen, whose career was split pretty evenly between St. Louis, Calgary and Pittsburgh, hasn’t had his number retired.