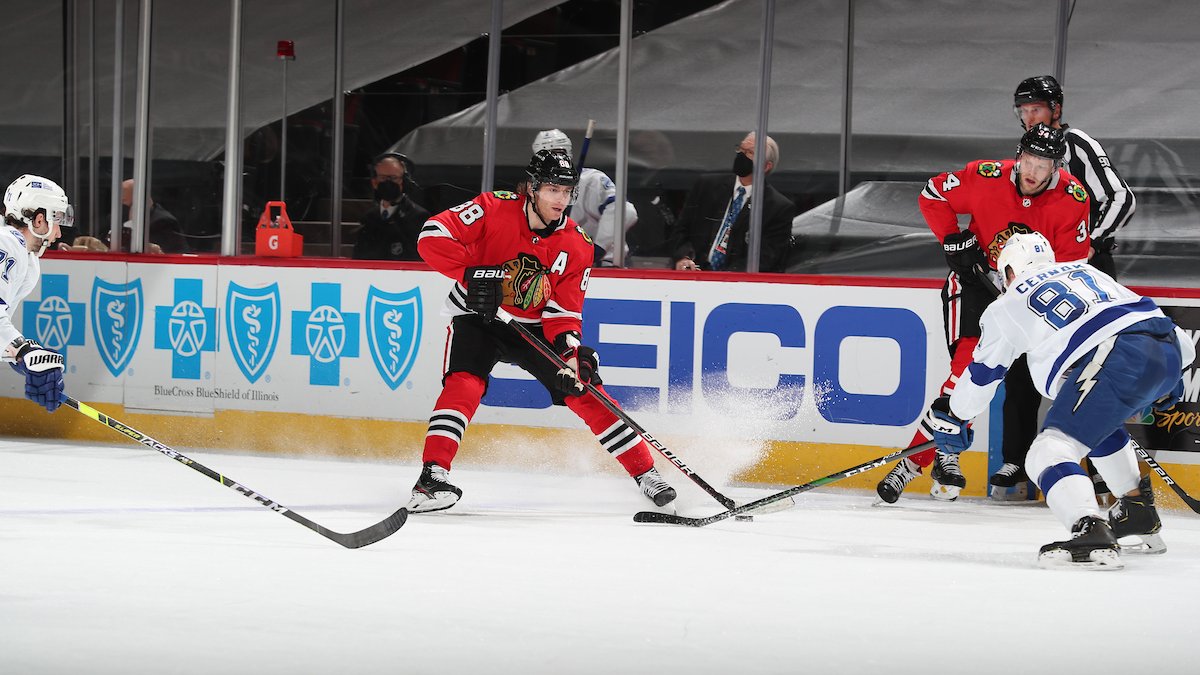 Friday was a long day for the Chicago Blackhawks players, the organization and the fans.

After losing with 0.1 on the clock on Thursday night, Friday morning brought the news that Brent Seabrook will never lace up his skates for an NHL game again. The heartbreaking news took the headlines away from the late loss and led to a day of tributes from fans and former teammates on social media.

But, at 7 o’clock in Chicago, the puck dropped on another important game between the Blackhawks and Lightning.

Malcolm Subban got the start. He got torched the first time he faced the Lightning in the season opener, and his last appearance against the Detroit Red Wings wasn’t great. In between he had a nice stretch of hockey, however. So which version of Subban would we see in net on this night?

It took less than three minutes for Tampa to get on the board. Anthony Cirelli opened the scoring at 2:51 and it appeared the effort the Bolts brought to the third period and overtime on Thursday night was there from the opening puck drop on Friday.

Over the opening ten minutes of the game Tampa was attacking and Subban was struggling with rebound control. Alex Killorn scored a second Tampa goal 21 seconds into a power play with Ian Mitchell in the box. It was starting to feel like a long night was coming.

However, the Lightning returned the favor and gave the Blackhawks a power play opportunity quickly after the Killorn goal.

Alex DeBrincat scored on the power play, the 100th regular season goal of his career.

Patrick Kane and Adam Boqvist picked up the helpers on DeBrincat’s 200th career regular season point in his 255th game.

At the end of 20 minutes, the Lightning had an 11-10 shot advantage and 2-1 lead on the scoreboard. To his credit, Subban settled down after the Killorn goal and was solid for the second half of the opening period.

During a television timeout during the first period the Blackhawks played a tribute video for Seabrook. His former teammates (damn that hurts to type) applauded from the bench.

The Tampa Bay Lightning tapped their sticks as well. And the officials applauded him, too. Both class moves to show respect to one of the great leaders in the NHL over the past 15 years.

The second period started similarly to the first. Tampa was all over Subban but he came up with some huge saves to keep the Hawks within one. Unlike his first start in Tampa, Subban rebounded from a tough start to keep his team in the mix.

And the skaters in front of him responded.

Kane set up DeBrincat for his second goal of the night 17 seconds after a Nikita Zadorov penalty expired. DeBrincat’s shot was true, and the game was tied.

The Hawks tied the game but they weren’t generating much more offense. Dominik Kubalik got a shot on net on the first shift after DeBrincat’s goal and Chicago would then wait almost five full minutes until their next shot on net (4:43 officially).

But in the final minute of the period the Blackhawks got a two-man advantage for 25 seconds with Mikhail Sergachev and Blake Coleman in the box.

The Sergachev penalty expired and the Blackhawks showed absolutely no sense of urgency in the final 30 seconds of the period. Chicago would have 61 seconds of power play time to start the third period, a similar scenario to Thursday night.

Tampa out-shot the Hawks 11-5 in the second period. The Hawks weren’t great but Subban was terrific.

The third period started almost the same way on Friday that it did on Thursday. Ryan McDonagh got a breakaway chance short-handed but Subban was able to make the save and keep the game tied.

Kubalik compounded the issue by cutting the Hawks’ advantage short when he guilty of tripping. Under siege early, the Hawks would go from advantage to a crucial kill quickly. Tampa had the only two shots on net while the Blackhawks were on the power play.

In the middle of the power play Calvin de Haan blocked a shot and couldn’t put much weight on what appeared to be his left leg. He stayed on the ice for about 30 seconds after the injury. When he was able to get off he went straight to the room.

Chicago got a change but McDonagh got another chance to change the score and wasn’t denied. Tampa took a 3-2 lead with an even strength goal at 3:20 into the third.

The Blackhawks continued struggling to get a shot on net. Their first shot was credited six minutes into the third. A blocked shot in front of the net found the stick of Kubalik who slammed it home to tie the game.

Duncan Keith picked up a significant assist on the goal.

Duncan Keith picks up career assist No. 517, which ties Steve Larmer for sixth in #Blackhawks history.

Let this serve as this week’s reminder that the Blackhawks should retire Steve Larmer’s jersey.

Keith was getting extra run on the ice because de Haan had not returned from the room after the shot block early in the period.

At 8:03 into the period Ryan Carpenter got Victor Hedman to take a dumb penalty, giving the Hawks a great power play opportunity. Unfortunately, the Hawks “advantage” was a clown show filled with turnovers. Adam Boqvist successfully excecuted the rare “drop pass to your opponent on your blue line” move twice in the first 50 seconds of the power play.

With six minutes left in regulation, Cirelli unloaded a missile that hit the crossbar but stayed out. Soon after Kubalik went to the box for tripping for the second time in the third period.

Carpenter and David Kampf got a good short-handed chance but were denied. Steven Stamkos posted up in the circle per usual and unloaded a few big blasts that were turned away. As the penalty expired the Hawks were caught in their defensive zone and could not get the puck out to save their lives. Nikata Zadorov and Connor Murphy were going on almost two minute shifts when they iced the puck.

Chicago won the faceoff and were able to get out long enough to change. Subban made a couple huge saves in the sequence with three minutes left in regulation.

Sixty minutes of hockey expired with the scored tied at three. Subban stopped 32 of 35 in regulation; his teammates generated only 23 shots on net in three periods. Curtis McElhinney wasn’t tested as often but was as good for Tampa.

The pace of overtime was ridiculous. Both teams had breakaways, 2-on-1s and great looks at the net turned away. Keith scrambled to break up a chance for Killorn but went to the box for the final 1:56 of overtime. This was an even bigger problem because de Haan never returned form his injury early in the third period.

Coach Jeremy Colliton sent our Nikita Zadorov and Connor Murphy… for the entire penalty kill. With the only other two options on the blue line being Ian Mitchell and Boqvist, Colliton opted to ride with the veterans.

With four seconds left in the overtime period, Kampf tied up Stamkos’ stick to do what the Hawks failed to do on Thursday: finish the extra session tied.

Subban made five more saves in overtime. He was magnificent. Chicago pout four shots on net in the overtime but they all came in the opening three minutes of the extra frame.

So we went to a shootout.

DeBrincat was denied to start the skills competition. Victor Hedman went first for Tampa and was rejected by Subban.

Philipp Kurashev got the call third and was able to beat McElhinney. Subban stoned Stamkos’ attempt to pick up the second point.

To be absolutely clear: this was a goalie win. Malcolm Subban carried the Blackhawks to two huge points in the standings tonight. He stopped 37 of 40 in the 65 minutes and all three in the shootout.