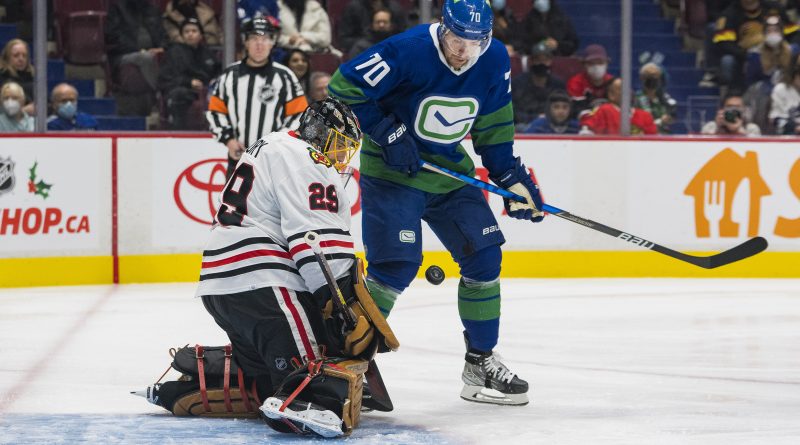 After the Oilers skated circles around the Blackhawks on Saturday night, the Hawks got a relatively early start in Vancouver on Sunday.

Unfortunately, it appeared they left the offense in… Seattle? In the first period against the Kraken?

The Canucks had lost five of their previous six coming in and had scored only 46 goals in their first 18 games of the season. But, against the Blackhawks on Sunday, they brought the offense.

If not for Marc-André Fleury, the Blackhawks could have easily been chasing three or four goals after 40 minutes.

The first period only saw one moment of significant for the Hawks, and it was ugly. Erik Gustafsson shoved former Hawks forward Tyler Motte into the back of Riley Stillman, who went down in pain. I’m not a doctor, but I’m guessing there’s a significant lower-leg injury here.

The Canucks out-shot the Blackhawks 15-6 in the first period.

The Canucks then out-shot the Blackhawks 15-7 in the second period.

Fleury was the Hawks’ savior for 40 minutes.

Calvin de Haan was back in the lineup for Caleb Jones for the night, so when Stillman went down the Blackhawks were skating with five defensemen (including Gustafsson… so four… ). Seth Jones and Jake McCabe were over 16 minutes in the first two periods.

Something else of note, Dylan Strome was getting some run at wing with Jonathan Toews and Brandon Hagel. Six different Blackhawks took at least two faceoffs in the first two periods and (shocked gasp!) Kirby Dach was over .500 at the dot; he won four of seven in the 40 minutes.

But that’s beside the point. The Blackhawks had zero offense.

Chicago just needed one good bounce. And, four minutes into the third period, they got a shot directed at the net that found its way past Thatcher Demko. A Gustafsson shot appeared to be redirected by Hagel and the Blackhawks had a 1-0 lead.

Gustafsson and Strome were credited with the helpers on Hagel’s fifth of the season.

Over the first 18 minutes of the third period, the Blackhawks did a much better job of keeping the puck away from Fleury. Unfortunately, McCabe went to the box with 2:18 left in regulation and his team up by one. At that point, Vancouver had only four shots on goal in the period.

The Canucks pulled their goaltender with 90 seconds left in regulation but Fleury kept stopping shots that reached him — and the guys in front of him continued blocking the shots they could.

The final 60 seconds of regulation was ridiculous. Fleury was working from one post to the other, his teammates were desperately trying to clear any puck they could reach but the Canucks continued to keep it in the zone. Seth Jones blocked a blast from Elias Pettersson inside the final 30 seconds. Vancouver used their timeout with 12.8 on the clock after the powerplay had come to a close. Chicago was back at five skaters; Vancouver was using six with Demko on the bench.

The Blackhawks were able to finish the job. Fleury picked up his first shutout of the season, stopping all 40 shots in the game. He was absolutely magnificent.

In the month of November, Fleury has now stopped 220 of 235 shots (.936 save percentage). For as questionable as his play was in October, he’s been the Vezina-version of himself this month. And Sunday night was his best effort with the Blackhawks.

Seth Jones led the Blackhawks with five blocked shots in 24:25.