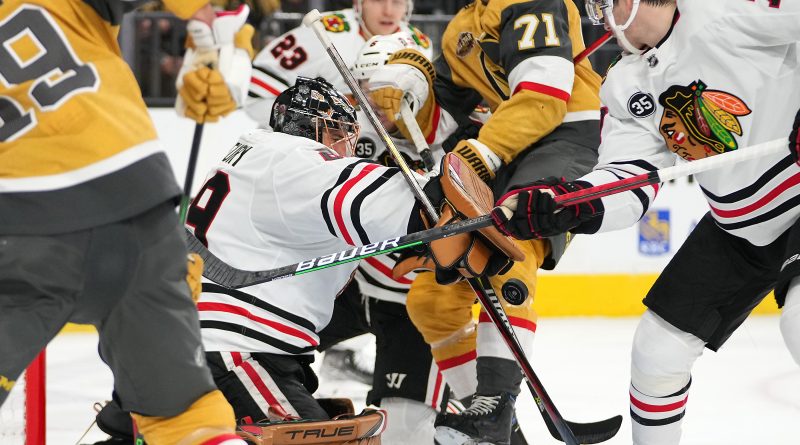 After suffering an ugly loss in Arizona, the Blackhawks headed to Vegas to play a team at the opposite end of the standings. Vegas is among the best teams in the NHL and leaders in the Western Conference. Chicago wanted/needed to play a much better game if they were going to have any chance against the Golden Knights.

Oh, and if you hadn’t heard, this was Marc-André Fleury’s first game back in Vegas since being traded to the Blackhawks. He was welcomed back as the hero he was in the first few years of Vegas’ franchise, and it clearly meant a lot to Fleury.

Marc-Andre Fleury is welcomed back to Vegas with a touching tribute. pic.twitter.com/z7kU6yJFCh

Also of note, Ian Mitchell was back in the lineup and Brett Connolly returned from his four-game suspension (that lasted longer because he was in COVID protocol as well).

The first period wasn’t ideal for the Hawks in front of Fleury. Ben Hutton scored his first goal of the year, beating Fleury with a shot Chicago’s netminder likely never saw to give Vegas a 1-0 lead five minutes into the contest. After 20 minutes, the Hawks had five shots on net; Vegas was credited with nine and the game’s only score.

Chicago’s effort in the second period was significantly better all over the ice. And it paid off on the scoreboard.

Juhjar Khaira tied the game at one 4:38 into the second period.

Ryan Carpenter, who talked about working harder between periods on the Chicago television broadcast, picked up the only assist on the Khaira goal.

Chicago continued to play stronger hockey, generating offense and blocking shot attempts in front of Fleury. Unlike the game in Arizona, the Blackhawks stayed out of the penalty box over the first two periods so the chances they were starting to generate had some follow-up on subsequent shifts.

And those chances turned into a go-ahead goal from Riley Stillman 14 minutes into the second.

Dylan Strome and Patrick Kane picked up the helpers on Stillman’s first of the year.

Vegas out-shot the Blackhawks in the second period, but the totals were 12-11. And, more importantly, the Blackhawks took a 2-1 lead into the third period.

Unlike Nicolas Beaudin in Arizona, Mitchell was able to get on the ice more than once. In fact, he was over seven minutes of ice time in the first two periods and was playing a pretty good game.

Predictably, Vegas came out with a much more physical start to the third period. The Hawks were struggling to get pucks on net and Fleury was facing the majority of the shots.

Fleury was terrific, however. Since allowing the first-period goal, he was on his game. And he was asked to make a few big saves down the stretch.

Robin Lehner left the ice for an extra Golden Knights attacker with 1:50 left in regulation. Fleury made a huge save with about 70 seconds left in regulation. His teammates iced the puck with 32.8 left on the clock, giving Vegas a chance to get fresh bodies on the ice for an offensive zone draw. Kirby Dach lost the draw (surprise!) but Fleury made another terrific save.

The final seconds rolled off the clock and the Blackhawks picked up their first win of the calendar year in an emotional homecoming for Fleury.

Chicago successfully stayed out of the penalty box for the entire night.

The Hawks’ blue line had a very good night. Stillman’s goal was the game-winner. Connor Murphy led the way with five blocked shots and two hits in 24:21. Seth Jones blocked three shots and put two on net in 27:24. Jake McCabe had four hits and two blocked shots in 23:34. And Calvin de Haan blocked four shots in 21:17.

Chicago allowed only five shots on net in the final 16 minutes of the game — with a one-goal lead. A completely different effort than the crap-the-bed display in Arizona.