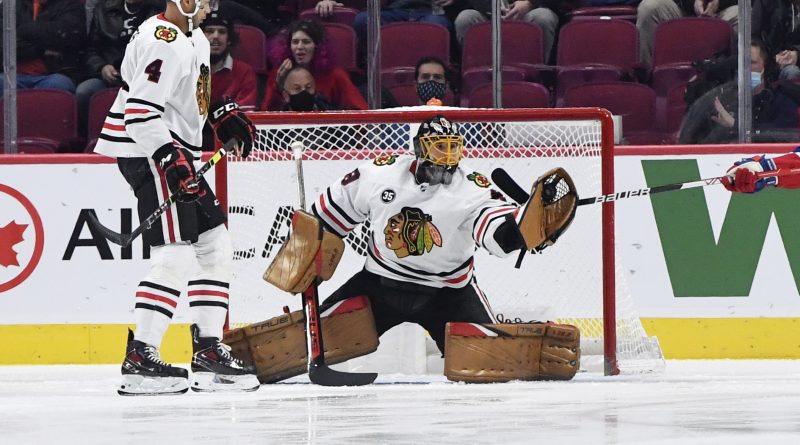 Desperately searching for offense, the Blackhawks opened the game with Patrick Kane, Alex DeBrincat and… Henrik Borgström. Dylan Strome was a healthy scratch in favor of the recently recalled Mike Hardman and Philipp Kurashev. Reese Johnson got to start the game on the Hawks’ second line. So the blender was turned on before the opening puck dropped.

The Blackhawks and Habs are both struggling this season. Montreal came in losers of four straight; they had 15 points in 27 games before Thursday, putting them ahead of only the Arizona Coyotes in the cellar of the NHL.

Sadly, this was not the hyped Original Six matchup of years gone by. But hey, Andrew Shaw was in the stands supporting two of his former employers (note: his kids were wearing Hawks jerseys).

Chicago out-shot Montreal 13-12 in the first period but neither team scored. Jake Allen was marvelous in net for Montreal and Fleury was solid for the Blackhawks.

It took more than half of the game for either team to get on the board. The Blackhawks got a power play and, at 13:48 into the second, they scored.

More importantly, for the first time this season, Jonathan Toews scored a goal.

Seth Jones and Patrick Kane picked up the assists on Toews’ goal.

The look of relief on the face of the captain was noticeable from a mile away. The weight is off his back; he no longer has to answer questions about when he’ll score his first of the year. More importantly for the Blackhawks, Toews and Kirby Dach have now scored in back-to-back games. If the Hawks want to do anything this season, those two need to be big parts of the offense.

Chicago had a 21-18 advantage in the shots column and took a 1-0 lead to the third period. Allen stole a few more goals from the Hawks in the second period and Fleury continued to be strong.

Neither side scored for 12 minutes in the third period, but the shots were heavily favoring Montreal. In the middle of the period the two teams welcomed the Blackhawks’ trend of lengthy periods without a stoppage. That ended with Borgström scoring a huge goal — extending the Blackhawks’ lead to two with eight minutes left in regulation.

The goal was unassisted and Borgström’s second of the year.

Montreal pulled their goalie with 2:40 left in regulation. With two minutes left, Brandon Hagel took a shot at the empty net and it hit the right post, missing a huge third goal by inches and instead icing the puck.

The Montreal fans chanted Fleury’s name in the closing seconds as he posted his 69th career shutout and his 500th win.

Fleury is the third goaltender in NHL history to win 500 games, and he did it in just 901 games — the fewest in history to reach the number.

It was worth watching how a couple youngsters — Mike Hardman and Reese Johnson — played in light of the Hawks acquiring Kurtis Gabriel earlier on Thursday. Gabriel is clearly on the club to be a physical presence, a role Hardman and Johnson had been filling. Hardman was credited with a team-leading six hits in under nine minutes of ice time. Johnson was credited with four hits and a blocked shot in 12 minutes of ice time.

Let’s talk about the faceoff circle, shall we? It was another debacle at the dot for Chicago skaters not-named Jonathan Toews. Toews won 13 of 16 faceoffs in the game. Borgström won six of 16. Dach won none of his four. The Blackhawks won 47 percent as a team in spite of Toews’ dominance.

But on a night when the longest-serving captain in Blackhawks history finally scores his first goal of the season, there is no question who the hero of the night is.