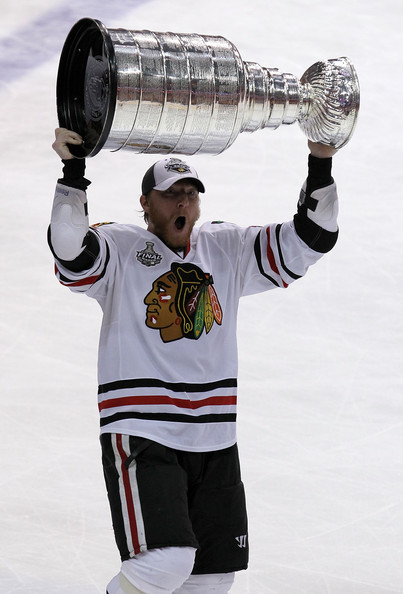 Hossa has put up some magnificent statistics in his career.

After being selected 12th overall in the 1997 Draft by Ottawa, Hossa made his NHL debut on Oct. 1 of that year when the Senators visited the Montreal Canadiens. In that first season, Hossa skated in seven NHL games – all on the road – and was credited with one assist.

To put that in perspective, Brandon Saad didn’t celebrate his fifth birthday until almost four weeks after Hossa made his NHL debut.

Hossa’s offense exploded in his first two seasons with the Thrashers after signing a three-year, $18M deal with Atlanta. Before a late-season trade to Pittsburgh in 2008, Hossa put up 108 goals and added 140 assists in only 222 games with the Thrashers.

The Pens rented Hossa for a run at the Stanley Cup, but they came up short against Detroit that year’s Final. He scored three times and added seven assists in 12 regular season games with Pittsburgh before posting 26 points (12 goals, 14 assists) in 20 postseason games with the Penguins.

Hossa signed a one-year deal with the Red Wings the following season, and gave Detroit 40 goals and 31 assists in 74 regular season games. He once again played in the Stanley Cup Final, this time with Detroit against the Penguins team he had left the year before. And, once again, Hossa’s team came up short.

Hossa and the Red Wings defeated the Hawks in the Western Conference Final in 2009. Just a few weeks later, in what became a stunning signal of the change taking place in the NHL, Hossa signed a 12-year contract with the Blackhawks. A shoulder injury that required surgery kept Hossa out of the Hawks’ lineup until Nov. 25, when the Hawks visited the Sharks in San Jose. In his Blackhawks debut, Hossa scored twice.

Hossa was one of six Chicago Blackhawks to represent their countries in the 2010 Winter Olympics in Vancouver. In seven games in the Slovak sweater in those Games, Hossa had nine points (three goals, six assists).  Hossa has scored 29 goals and added 38 assists in 71 games in international competition. During the 2009-10 season, Hossa was the centerpiece of a number of dramatic moments. However, what could have ultimately been remembered as one of the biggest mistakes of Hossa’s career ended as one of the most memorable plays in Blackhawks history.

Late in Game 5 of the first round series against Nashville – a series in which the Blackhawks were being outplayed – Hossa was called for a major boarding penalty late in regulation with the Hawks trailing the Preds 4-3. If not for a short-handed goal from Patrick Kane in the closing moments of regulation, the game wouldn’t have made it to overtime.

Hossa spent almost four full minutes in the box to start the overtime period before leaving the box and heading straight to the front of the net.

There were decibel readings during the Stanley Cup Final that year that were impressive, but I submit that the United Center has never been as loud (for a Blackhawks game) as it was when Hossa put that game-winner home.

That spring, for the third time in as many years, Hossa would play in the Stanley Cup Final. This time, with the Blackhawks, the ending was different. Hossa (finally) got to raise the Cup. Since joining the Blackhawks, Hossa has (entering Sunday) scored 87 goals and added 115 assists in 224 games. He is also plus-57 with Chicago.

Many new fans are starting to see that Hossa is one of the strongest, smartest players in the game who is good in every situation. He’s a future Hall of Famer, and Hawks fans will hopefully continue to enjoy his game for years to come.