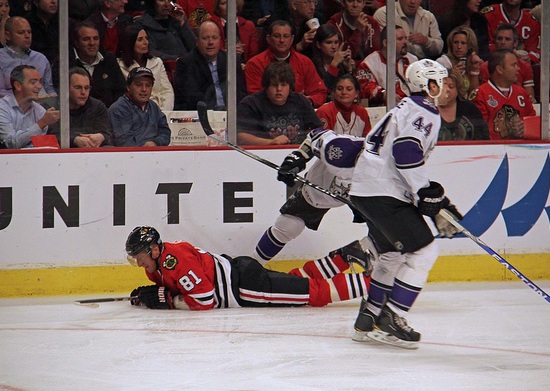 Reports from Blackhawks practice on Thursday were bad: superstar Marian Hossa, who was off to one of the best starts in the NHL this year, will miss “up to two weeks” with an upper-body injury. Hossa was injured on Wednesday night against the LA Kings.

Where do the Hawks go from here?

We’ve already seen Patrick Sharp, Patrick Kane and Tomas Kopecky miss games up front for the Hawks, but each only missed a single game. While those veterans were missing, the Hawks got a look from Brandon Pirri and Evan Brophey, both centers. Indications at practice on Thursday were that Kopecky will stay at center, where he started the game on Wednesday night.

The other moves that were apparent on the ice on Thursday included Viktor Stalberg, who scored his third goal against the Kings, bumping up to the top line with Jonathan Toews and Sharp. Dave Bolland was not on the ice for practice on Thursday, but the team indicated that he was simply excused; there are no new injuries to report other than Hossa.

Looking at Rockford, there are a number of options. The Hawks could bring back Pirri, who has played exceptionally well of late, or the older Brophey. However, given the potential length of Hossa’s absence, the team will likely look for more of an impact player.

According to Adam Jahns of the Chicago Sun-Times, coach Joel Quenneville specifically said he doesn’t think Jeremy Morin is ready yet, which may cross him off the list. Morin missed a game recently because of a lower-body injury, but has played since.

Ryan Potulny has NHL experience and has played well in Rockford to start the year. The 26-year-old center has six points (two goals, four assists) in eights games after scoring 32 points (15 goals, 17 assists) in 64 games with the Edmonton Oilers. He could be the best fit for the roster considering the Blackhawks play the Oilers twice in the next ten days. However, the loss of Hossa may create the perfect opportunity for Kyle Beach to make his NHL debut.

Beach, 20, has two goals, three assists and 17 penalty minutes in eight games to begin his AHL career, which is about what could be expected from the young power forward. How showed some signs in training camp of being close to NHL-ready, and his production hasn’t dropped off.

One of the problems that has plagued the Blackhawks early in the season has been a lack of emotion on the ice. This isn’t to say that there weren’t tears when the banner was raised on opening night, but the roster has been very vanilla this year. With the departures of Adam Burish, Ben Eager, Kris Versteeg and Dustin Byfuglien this summer, there were questions about the chemistry of the roster; it appears the emotions of the team have leveled off.

Beach is anything but vanilla.

Adding Beach’s skills with the puck would be one thing, but injecting his emotional approach to the ice into this group may be just what the team needs to jump-start the flow during slower periods of play.

He might not get the call. And, if he does, he may not stay in Chicago the entire season. But this might be the perfect time for Beach to get a taste of the big time.