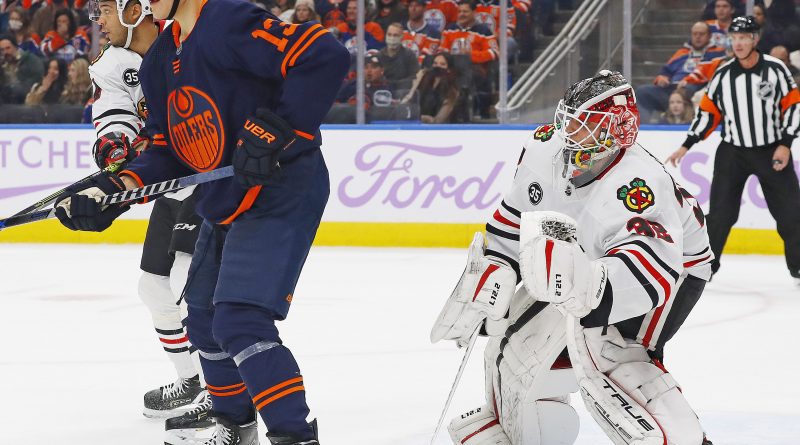 Remember how the Blackhawks hadn’t lost — or trailed — since Jeremy Colliton got fired? Those were four fun games.

Those were four fun games against teams that didn’t have Connor McDavid or Leon Draisaitl.

Unfortunately, the Hawks were in Edmonton on Saturday night to face McDavid, Draisaitl, Duncan Keith and the rest of the (healthy) Oilers. The list of healthy Oilers did not include Darnell Nurse, who is expected to miss a couple weeks.

Chicago got Brandon Hagel back from a sprained AC joint in his shoulder for the game, which was nice. Calvin de Haan was not available for the Blackhawks, who skated six defensemen including Caleb Jones. And Kevin Lankinen was a bit of a surprise starter; Marc-André Fleury had stopped 95 of 100 shots he had faced over his last three starts (all wins).

The Blackhawks didn’t trail in this game for ten minutes. While the Hawks were successfully keeping the Oilers off the board, it felt like they were trying their absolute hardest to keep up with the speed of the Oilers. Like their best effort was to just hang in there. And it was… for ten minutes.

But at 10:16 somehow McDavid found a loose puck to the side of the net and put it home. The Oilers had a 1-0 lead.

What’s the absolute worst thing the Hawks could do after surrendering a lead? Give the Oilers a power play. And Philipp Kurashev went to the box 31 seconds after the McDavid goal.

Check that — the absolute worst thing the Hawks could do is give the Oilers a two-man advantage with a key penalty killer in the box. So when Jonathan Toews joined Kurashev in the box, the recipe for disaster was complete. And Edmonton made the Hawks pay. Tyson Barrie made the lead two 63 seconds after McDavid’s goal.

The good news: the Blackhawks killed the rest of the Toews penalty and then the Blackhawks got a power play. The bad news: an ugly drop pass turned into a short-handed goal from Kailer Yamamoto and the Oilers had a three-goal lead.

When it rains it pours, and when they Oilers have the puck they score. They had the puck a lot in the first period, and Ryan McLeod made the score 4-0 with under two minutes left in the opening period.

It felt like the wheels were totally off (they were), but Chicago got on the board with 20 seconds left in the first period. Alex DeBrincat was credited with the goal, cutting the lead to 4-1.

To their credit, the Blackhawks actually out-shot the Oilers 17-14 in the first period. But Edmonton got quality looks and converted them.

The second period saw three things of note, none of which were a goal from either team.

First, the seemingly nightly stretch of 8-10 minutes without a stoppage came early in the second. It included a shift of almost five minutes for the Hawks’ defensemen as the Blackhawks were caught in their zone for a ridiculous amount of time. Connor Murphy and Caleb Jones officially clocked a shift of 4:50 while Dylan Strome and Juhjar Khaira were on the ice for 3:20. Mike Hardman escaped after 3:15.

From there, Lankinen was the story. He made a few amazing saves to keep the Blackhawks within three.

Neither team scored in a second period that saw Edmonton out-shoot the Blackhawks 10-6 and really control the pace of play.

One scary moment late in the second period came when Keith hit Hagel and it appeared Hagel’s night might be over. He left the ice favoring his shoulder again and went straight to the room. Thankfully, Hagel returned to the ice early in the third period.

The second group over the boards in the third period was Patrick Kane, Jonathan Toews and Alex DeBrincat. Finally the nuclear option was on the ice.

Kurashev went to the box for a second time in the game, this time for holding McDavid almost seven minutes into the third. Chicago was able to successfully kill the penalty and, when Kurashev left the box, the puck immediately found him. He initiated a two-on-one that ended with DeBrincat’s second goal of the night.

The lead was down to two with 11 minutes left in regulation.

Unfortunately, McDavid drew a third penalty in the game with under seven minutes left in regulation — and it was Toews again. It looked like a soft call, but enough of an emphasis has been put on protecting players like (especially) McDavid recently that he was getting calls all night. Chicago would need to kill a penalty and then score twice to tie the game.

With 44 seconds left in the Toews penalty, Zach Hyman did the Hawks a favor and took his second stupid penalty of the night. Toews emerged from the box for a power play.

Unfortunately, the next goal came off the stick of Draisaitl, who scored Edmonton’s second short-handed goal of the game when a clearing attempt avoided a couple Chicago sticks and found the league’s leading scorer all alone in the neutral zone. Lankinen was left alone to defend Draisaitl, not an ideal situation.

Erik Gustafsson led the Blackhawks with five shots on net. Dach won five of 15 faceoffs, slightly above his 30 percent win rate for the season but not nearly good enough. He wasn’t alone; Toews won only six of 15 draws.

The win streak is over, the Blackhawks trailed for the first time under King’s coaching but they hadn’t faced the most dynamic two offensive players in the league. Chicago’s power play was a dumpster fire; two short-handed goals against is unacceptable. And the second half of the first period was a gong show that saw Edmonton score four times in less than nine months.

Lankinen played well. DeBrincat added two more goals. But the reality is simple: the Hawks don’t have the firepower to skate with a team like Edmonton.

How would I rate @StephenNelson performance handling PxP on tonight's #Blackhawks broadcast? pic.twitter.com/hiKpzFi8zU

Please consider adding your name to our Change.org petition to get Steve Larmer reconsidered by the Hockey Hall of Fame selection committee. He should be enshrined already. We’re trying to make it happen now.