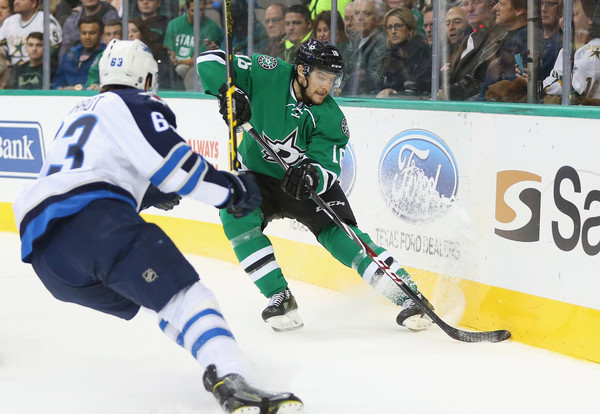 One of the players brought back to Chicago in the deal sending Patrick Sharp and Stephen Johns to Dallas was forward Ryan Garbutt. Let’s take a deeper look at the veteran forward.

Garbutt, who will turn 30 in August, appeared in 67 games with the Stars last season, picking up eight goals and 17 assists. In his career, Garbutt has registered 30 goals and 40 assists in 198 regular season games after signing with the Stars as a free agent in 2011. He was never drafted, and spent part of the 2010-11 season in Chicago with the Wolves.

With the Stars last season, Garbutt was credited with 82 hits, 48 blocked shots and 27 takeaways while averaging 13:33 on the ice per game. His iCorsi/60 was 18.04, which was the highest of any Dallas player who skated in more than 35 games last year, and his iCorsi of 233 ranked fourth overall on the Stars roster behind Jamie Benn, Tyler Seguin and Jason Spezza.

He also averaged 1:33 per game on the ice short-handed for a Dallas team that finished 19th in the NHL on penalty kill (80.7 percent). In a little more than 104 minutes of short-handed ice time, opponents scored 12 goals while Garbutt was on the ice.

With Dallas retaining half of his cap hit, Garbutt will count $900,000 against the cap for Chicago for the next two years. He is primarily a left wing who is listed at 6-0 and 195 pounds, and figures to slot into the mess that is becoming the Hawks’ bottom six in training camp.