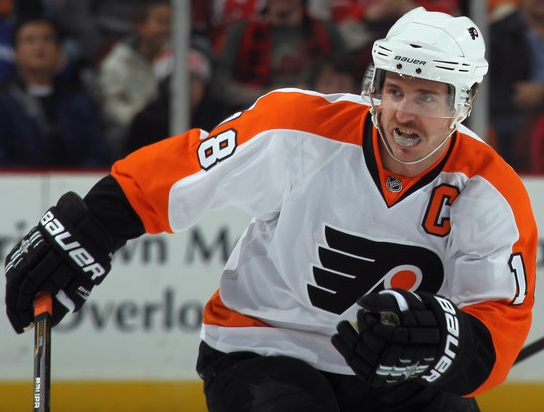 How do these two moves impact the Flyers? The changes will be dramatic, and the improvement (if there is any) will take years to be realized.

But, more importantly, what do these two trades mean to the Western Conference? Let’s take a look.

The first deal on Thursday sent Carter to the Blue Jackets, who are in the Central Division with the Blackhawks. Carter cost the Jackets Jakub Voracek and picks, so the only real analysis we can make is looking at the improvement to the roster that will be immediately felt in Columbus. But what you don’t see in these numbers is that Carter’s 66 points and 54 percent faceoff wins will now be skating next to Rick Nash through at least 2018, when Nash’s contract is due. To put that into perspective, Nash led the Jackets with 66 points last year; only Nash and RJ Umberger had more than 48 points in Columbus last year.

Voracek will likely develop into a solid top-six forward in Philadelphia, but the immediate need in Columbus was a piece to compliment Nash. By adding Carter, the Jackets have provided Nash with something Jarome Iginla has never had in Calgary: a legit center.

Columbus still has issues, but this is a major step in the right direction.

The second deal – the real shocker – came later when the Flyers traded their captain, Mike Richards, to the Los Angeles Kings for Wayne Simmonds, top prospect Braden Schenn and a second round pick. While Schenn isn’t an NHL player (yet), and the pick hasn’t been used, all we can compare here is the new Kings center to the power forward that’s departing. Again, substantial differences. Richards was the captain of a very good Philadelphia team that is just 13 months removed from a Stanley Cup Finals appearance. Simmonds, meanwhile, did pile up 125 hits in LA last year, but stepped back from 40 to 30 points from the previous season. The Los Angeles organization was high on Simmonds, but the ability to bring in an All-Star center is a no-brainer.

Like the Carter deal, this is about the now for LA. Schenn is a very highly regarded prospect (HockeysFuture.com ranks him the top overall prospect in the NHL), but Kings management doesn’t believe he’s NHL-ready yet.

The Kings will not slot Richards as their second center, skating him with Dustin Brown and another wing that, according to sources, could be determined by the end of the weekend via trade. Anze Kopitar will remain the top line center in Los Angeles.

With this move, the Kings instantly become a front-runner in the Western Conference. Vancouver will have departures this summer, and other teams around the Conference are going to see changes in their lineup. But what the Kings did yesterday gives them two bona fide lines that should compete with any team in the game.