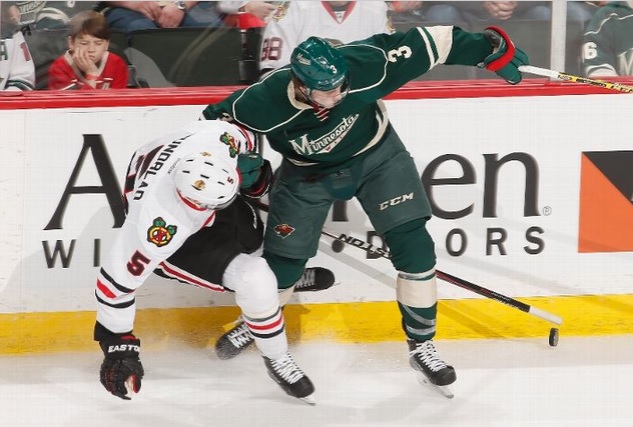 Corey Crawford was the only player to show up for the Hawks on Tuesday night, and for the first time in almost nine years Chicago was shut out in consecutive games. Crawford faced 24 shots in the second period; Devan Dubnyk faced 24 in the game. Unfortunately, Crawford stopped only 40 of 43 in the loss. The Hawks have allowed more than 40 shots in a game only twice in the new calendar year – and both instances have been in Minnesota.

Offensively, the Hawks were non-existent. Patrick Kane, Marian Hossa and Jonathan Toews were credited with one shot on net each; Bryan Bickell led the team with five.

The Hawks won 27 of 60 faceoffs, were out-hit 20-14, and failed on their only two power plays. Of course one of those advantages lasted only 22 seconds before Andrew Shaw went to the box for interference.

Teuvo Teravainen skated 12:26 in the game and won two of three faceoffs, but didn’t register a single shot on goal.

Chicago returns to the ice on Friday night in Winnipeg to face a Jets team that left Evander Kane in the press box as a healthy scratch on Tuesday night. Dustin Byfuglien moved back to forward, and the Jets lost in overtime.

The Hawks have lost three of five; the Jets have lost five straight. Something has to give.