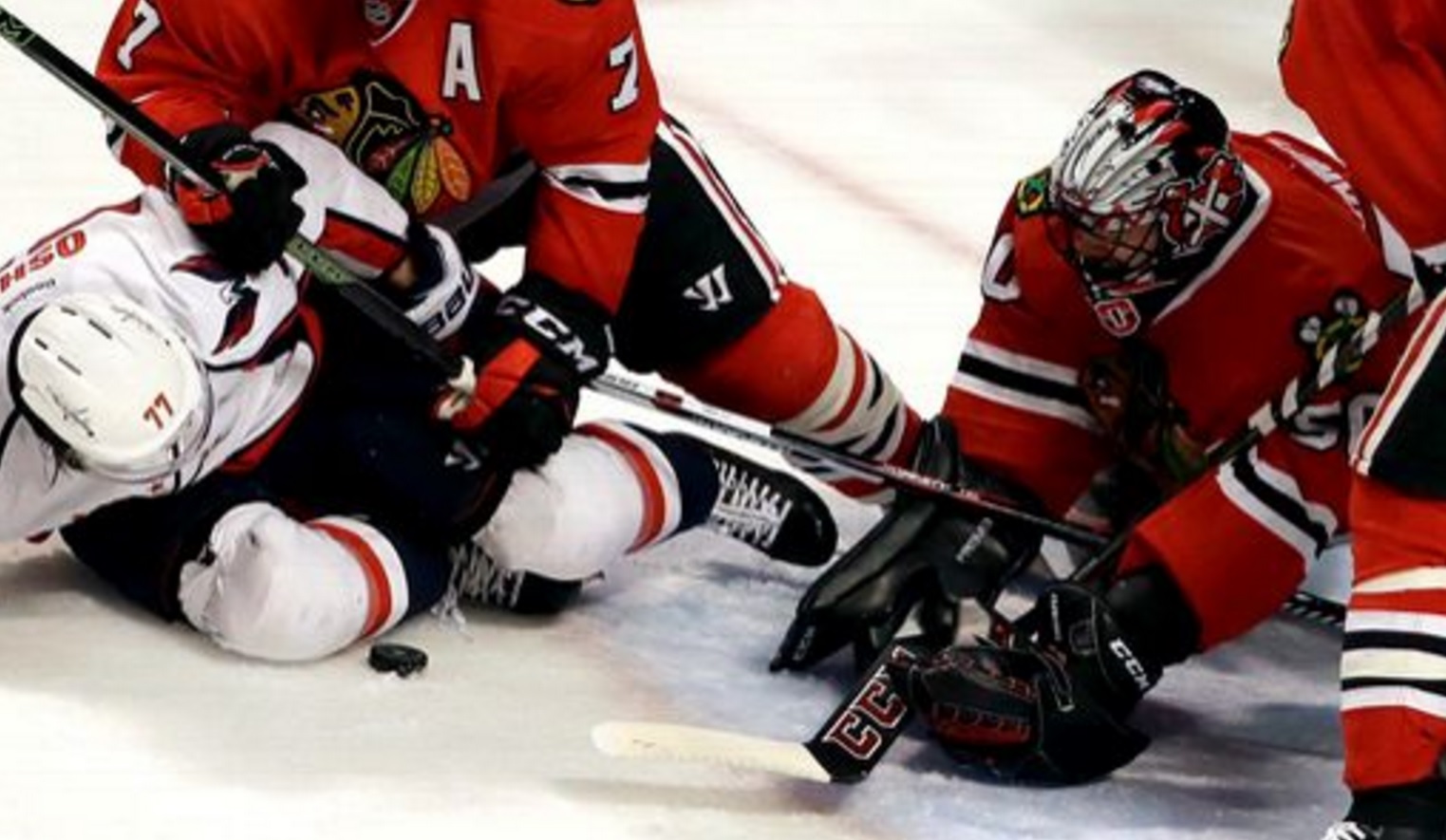 The Blackhawks had two of their new faces in the lineup on Sunday afternoon, and the impact was immediate.

Andrew Ladd joined the Hawks’ top line with Jonathan Toews and Andrew Shaw, and Tomas Fleischmann skated on the Hawks’ third line with Teuvo Teravainen and Andrew Desjardins. Both looked good – and comfortable – and the ripple effect down the roster was noticeable from the opening puck drop.

Washington took advantage of an early power play when Marcus Johansson tipped in a shot that was in the process of being bobbled by Corey Crawford. Justin Williams unloaded from the point and Crawford tried to catch it in his glove but it popped out, and Johansson was on the doorstep and took advantage.

The Caps held the lead for only 31 seconds, however.

Artem Anisimov made a great play to keep the puck in the offensive zone and Trevor van Riemsdyk made a terrific pass to a wide open Patrick Kane, who had all day to undress Braden Holtby and tie the game.

Washington out-shot Chicago 17-6 in the first period, but it was clear that some elements of the new-look Hawks were beginning to click.

Fleischmann and Teravainen looked to have pretty good chemistry early and often; Teravainen played his most confident game of the season. He was strong on the puck the entire game and finished tied for the team lead with four shots on net while winning half of his six faceoffs.

Late in the second period with Taylor Chorney in the box for Washington, Teravainen made a beautiful, easy pass across the crease to Toews who gave the Hawks a 2-1 lead.

Ladd picked up the second assist on Toews’ goal, the first point of his second stint with the Blackhawks.

Chicago totally flipped the script on Washington in the second, out-shooting the Caps 14-4 and controlling the entire 20 minutes. For a team that was integrating two new forwards and was still without Marian Hossa, the Hawks absolutely took it to the team with the best record in the NHL with all four lines rolling well.

The Hawks continued to put pressure on Holtby early in the third, and extended their lead to 3-1 when Dennis Rasmussen scored his fourth of the season. Richard Panik came in strong on the forecheck and Rasmussen was the beneficiary, putting home the eventual game-winner at 12:47 into the third.

A parade to the penalty box began with Andrew Shaw and Tom Wilson receiving matching minors for roughing, but Kane was sent off for a high stick 57 seconds later. The Hawks were able to successfully kill off the 4-on-3, a huge opportunity for a powerful Washington power play.

TJ Oshie took a dumb, selfish penalty at 13:05, getting called for interference after taking a whack at a few Hawks. Washington was able to take care of that penalty, and the officials then gave the visitors another enormous opportunity.

Chicago was called for too many men (which Rasmussen served), and then Niklas Hjalmarsson was sent to the box for unsportsmanlike conduct 71 seconds later. Barry Trotz pulled Holtby, giving the Caps a 6-on-3 with an empty net behind them 3:26 left in regulation.

Washington took advantage, scoring only five seconds into the three-man advantage when Evgeny Kuznetsov slapped a puck off Crawford and into the net. That killed off the first penalty, but the Hawks still had to kill 1:55 with Hjalmarsson still in the box.

Chicago did that, and withstood a strong rush from the Caps to close out the game. Duncan Keith barely missed an open net late, leaving the door open for a final rush but the Blackhawks had enough to hold on.

Crawford made 28 saves to earn a victory against Holtby, his strongest competition for the Vezina Trophy this year. Holtby allowed three goals against 23 shots in the loss.

Fleischmann skated 13:17 with one hit, one blocked shot and one shot on net. He was immediately put to work on the penalty kill, skating 2:15 short-handed.

Teravainen, the number one star of the game, led the Hawks with four shots on net.

Toews had a great afternoon against Nicklas Backstrom, one of the best centers in the league in his own right. Toews won 18 of 22 at the dot and was credited with three hits in the victory.

Michal Rozsival led the Hawks with four blocked shots and five hits in the game; Christian Ehrhoff was a healthy scratch for the matinee.

Alexander Ovechkin led all skaters with five shots on net, but was held without a point.

The Blackhawks hope to have Marian Hossa back in the lineup soon, and will add Dale Weise as soon as his visa issues are cleared up. Chicago visits Detroit on Wednesday night.