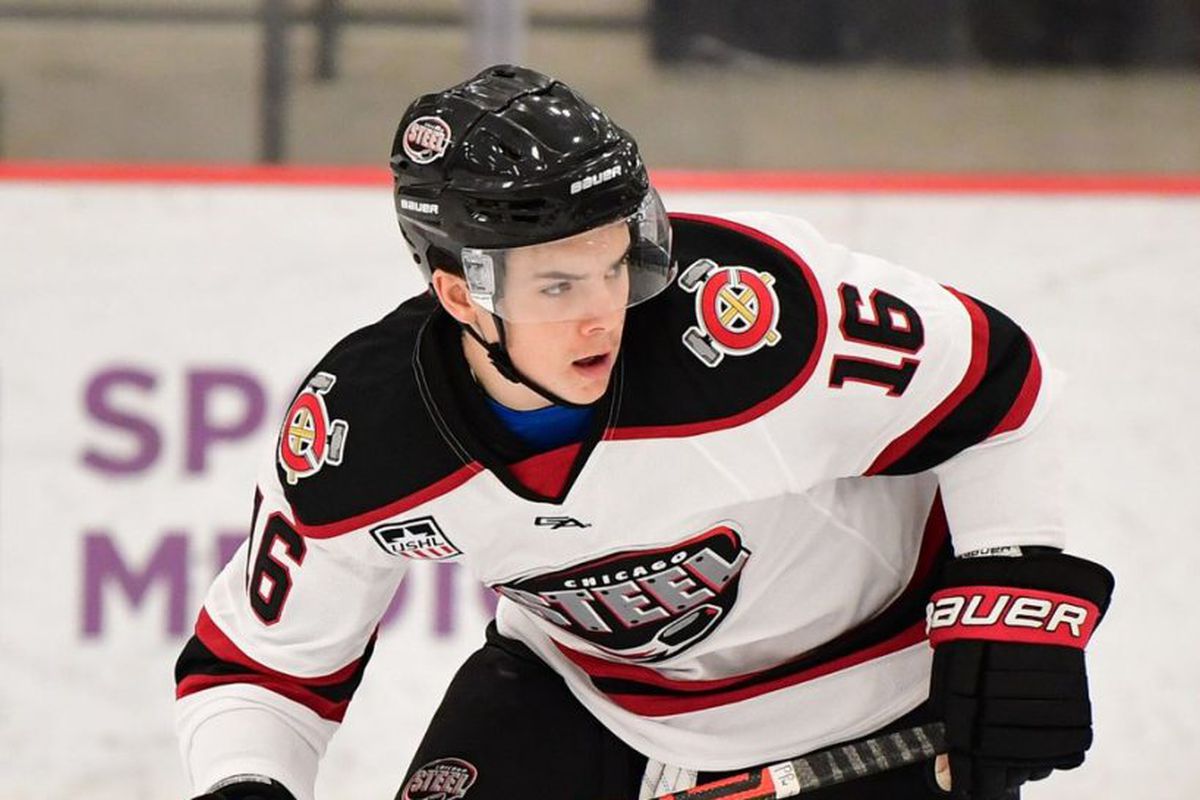 After selecting Lukas Reichel in the first round of the 2020 NHL Draft, the Blackhawks will have to wait through 14 picks before being back on the clock on Wednesday.

That, of course, assumes the Blackhawks don’t move up; they reportedly tried to trade up during the first round.

There are a couple names lots of fans have likely fallen in love with overnight as Blackhawks fans beg for size. Winger Noel Gunler and defenseman William Wallinder, both from Sweden, are big players who more than a couple pundits predicted could go before the first round ended.

The odds either of them is still available when the Hawks pick at 46 are long.

The Blackhawks like Colangelo – a lot. In September, Scott Powers at The Athletic wrote “The Blackhawks have conducted interviews with a number of draft candidates, but he is one they’ve talked to multiple times.” He’s a solid, big body who is currently playing college hockey at Northeastern University. His size would be a nice addition to the system.

Desperate for a goaltender? Daws is the top North American goaltender and, though he would feel like a reach in the middle of the second round, wouldn’t be out of the question for the Hawks. He’s a good positional netminder who, with another couple years to develop, might be a guy who can hold his own in Chicago as the number one.

EliteProspects makes this kid sound like the kind of defenseman most of the comments here and elsewhere have been begging for:

“He’ll walk the offensive blue line with the puck on his stick with relative ease; and he can mitigate risk while maintaining an aggressive, space-consuming posture when defending the defensive blue line. He skates well, has a long reach, an active stick, and good habits with his footwork.”

Lots of Blackhawks fans were scared of Alex Tuch during the playoffs this fall… well, his younger brother is available. He’s currently a freshman at Boston University, where the Blackhawks already have two prospects (Jake Wise and Alex Vlasic). The younger Tuch uses his body well around the net but hasn’t displayed the higher-end motor that made his brother a first round pick. He would probably be a reach in the second but an intriguing player in the third.

From Corey Pronman at The Athletic (who ranked him #77 overall):

“There are moments and games where he looks like a top-end player. He’s 6-foot-4 and a true high-end skater. When he’s on, he shows skill and offensive creativity, making plays all over the ice. He’s one of the best puck rushers in the draft and shows no fear to go end to end – something he does a lot of during games. I’ve seen flashes of great vision from him, I’ve also seen times where it seems like he gets tunnel vision and just wants to do it all himself, so I debated between a 55 and a 60 on his hockey sense.”

If you haven’t paid attention during the Bowman Regime, the Blackhawks love the US National Development Program. Peterson feels more like a solid option in the third round than a longer-term project pick in the mid-second, but his size will get a team’s attention that’s desperate for a big body. He is at Boston University with Tuch.

6 thoughts on “NHL Draft: Day Two Players To Watch For The Blackhawks”