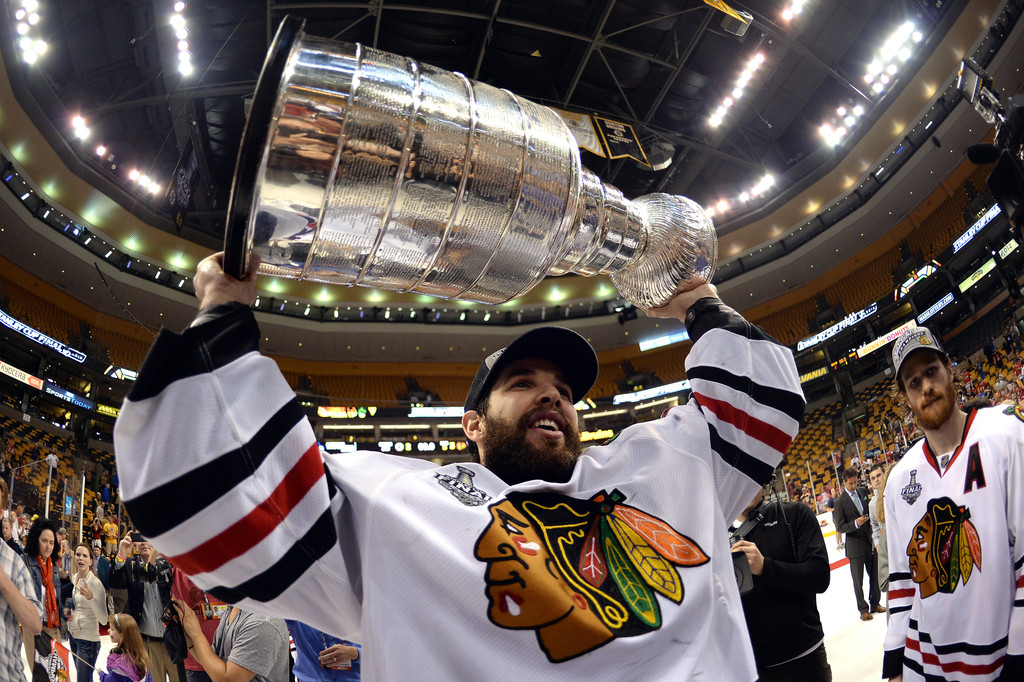 With news on Wednesday that Boston had given Tuukka Rask an eight-year, $56M contract, the bar has once again been raised for contracts given to goaltenders in the NHL.

In 12 months, Corey Crawford – who just defeated Rask in the Stanley Cup Final – will need a new contract. The money given to Rask and a few other netminders raises an important question for the Blackhawks moving forward.

How much is Crawford worth? There are a couple goaltenders entering the first seasons of long-term deals this fall that can be used as comparables for Crawford as we look forward. One is Rask, the other is Detroit’s Jimmy Howard.

There will be some that immediately say “You can’t put Crawford in a category with those two. Rask and Howard are elite and Crawford isn’t.” However, the numbers might lend themselves favorably to Crawford’s side of his next contract negotiation.

Consider the save percentages for the three in each of the last three seasons:

In the cases of Howard and Crawford, each had one season with a sub-.910 save percentage, and their overall performance for the last three seasons is relatively close. Rask has had three strong seasons in a row, albeit with a significantly smaller sample size; Rask hadn’t started more than 29 games in a regular season before the 2013 season.

The biggest difference among the three is their shutout totals. Howard (13) had almost twice as many as Crawford (7), and Rask (10) has also out-performed Crawford. Of course, Crawford didn’t have a single shutout during the 2011-12 regular season.

While regular season numbers might indicate Crawford is just behind Howard and Rask, the postseason tells a different story.

Of these three players, Crawford has started the most playoff games (36) in the last three years. Rask (35) has only played in the last two postseasons for the Bruins, and Howard (30) has played the fewest of the group.

In the last three playoffs, Crawford has two shutouts to only one for Howard; Rask had three this spring after none last year. Here are the postseason save percentages for the three netminders over the same years:

The 2012 postseason did not treat Howard or Crawford well; Detroit was eliminated in five games and Chicago was bounced in six. Even Rask’s percentage was down significantly from his regular season numbers last year as Boston was eliminated after 13 playoff games.

But in all three seasons, Crawford’s save percentage was better than Howard’s, and he was Rask’s equal during the Final this year. The case has (appropriately) been made that Howard was individually the biggest (only) reason Detroit pushed the Hawks to seven games, but Crawford won the series… and the two that followed it.

Perhaps the biggest difference between the three is the ultimate hardware. Only Crawford has won a Stanley Cup as his team’s starter; Rask was Tim Thomas’ back-up in 2011, and Howard didn’t play for the Wings in the 2008 playoffs.

Will the Blackhawks see Crawford as a $4-5M per year player and offer him a longer-term deal?

Or will we see Antti Raanta emerge this season as the heir apparent between the pipes at the United Center?

These are two legitimate questions because the Blackhawks have one other distinction that Detroit and Boston cannot claim.

Detroit and Boston have played in two Stanley Cup Final series since the 2004-05 season was cancelled, but only won once.

Only the Chicago Blackhawks have won twice in the last eight years.

And the Blackhawks have won with two different goaltenders.

Obviously Antti Niemi left for San Jose after the 2010 Cup, but the Hawks were able to hand the net to Crawford. After two tough postseasons, the Hawks climbed back to the top this year.

The cap’s movement after the 2013-14 season will be a significant factor in the organization’s plans moving forward. With Jonathan Toews and Patrick Kane set to become unrestricted free agents in 2015, the Blackhawks are already taking steps to insure the cornerstones of the franchise stay in the Indian head.

How much money the Hawks commit to the goaltender position will be something to watch in the next year. Crawford has won the Stanley Cup (and should have won the Conn Smythe). But will he get a big pay-day in Chicago? Only time will tell.

35 thoughts on “How Much Is Corey Crawford Worth?”