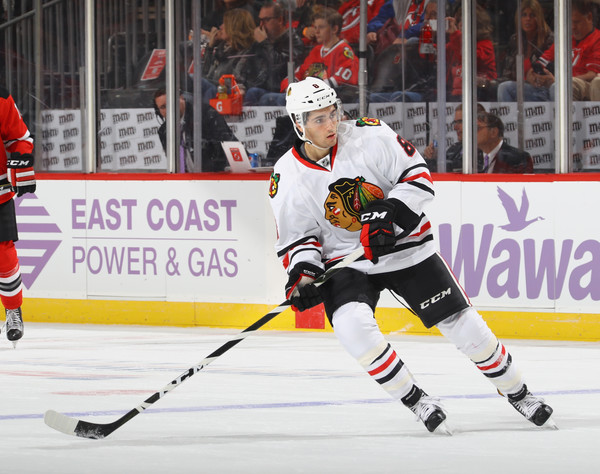 This season, all of the rookie of the year conversation around the NHL has rightfully been centered around Toronto’s Auston Matthews and Winnipeg’s Patrik Laine. The top two picks in the 2016 NHL Draft have been terrific all season, and are worthy of battling for this year’s Calder Memorial Trophy.

But since he was recalled in mid-January, Blackhawks forward Nick Schmaltz has been among the best first year players in the league.

Impressively, all 15 of his points have come at even strength, which trails only Laine over that time frame as well.

But Schmaltz has stayed on the Hawks’ top line since being recalled because of his all around game.

He ranks third among rookies with 15 takeaways since Jan. 17, trailing only Matthews and Nylander. His SAT percentage is 53.90 which ranks 17th in the league among rookies with at least 10 games played since Jan. 17; Ryan Hartman (54.81) is one of the 16 skaters ahead of Schmaltz. Schmaltz also ranks second in 5-on-5 shooting percentage (15.9 percent) behind, once again, Laine (16.0).

Whenever you have a young player making this kind of impact it helps a team win games. Coupled with superstars like Jonathan Toews and Patrick Kane catching fire at the same time, it can make a team damn near unbeatable. And since Jan. 17, that’s exactly what the Hawks have done: win games. Chicago has a 13-4-0 record in the last 17 games with Schmaltz in the lineup.

8 thoughts on “Nick Schmaltz Emerging As A Top Rookie”