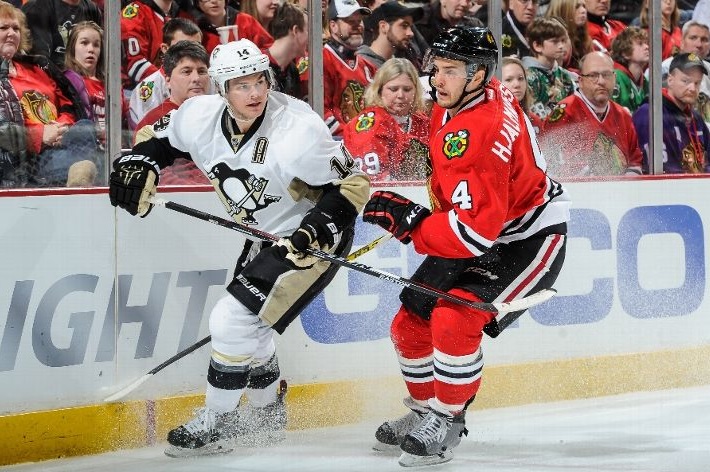 Niklas Hjalmarsson did his job on Sunday. He and Johnny Oduya were tasked with shutting down the Penguins’ top line, and Hjalmarsson was as good against Sidney Crosby as any defenseman in the league could be.

But Hjalmarsson scoring the Hawks only goal? That was not expected.

Hjalmarsson put a shot through traffic and beat Marc-Andre Fleury for only his second goal of the season early in the second period, the only shot that would get past Fleury in 65 minutes of hockey. In the game, Hjalmarsson skated 22:12 and was credited with three shots on net and two blocked shots in 31 shifts.

Crosby came in among the league leaders in scoring, an expected position for the game’s “golden boy.” He skated 20:42 and was credited with four shots on net and two missed shots, finishing the game minus-one. He was called for tripping Johnny Oduya, but the officials overturned the call because… yeah. Crosby also won 13 of 24 faceoffs in the game.

Jonathan Toews, Marian Hossa and Brandon Saad came in as one of the hottest offensive lines in the league, but went head-to-head with Crosby’s line all day. Toews won 10 of 18 faceoffs and was credited with one assist, three hits and two blocked shots against Crosby.

Toews, of course, has three items at home that Crosby doesn’t: a Conn Smythe, a Selke, and a second Stanley Cup ring.

Hossa led the Hawks with four hits and Saad led the team with two takeaways in a stellar defensive performance from the Hawks’ top line. Hossa and Saad were both credited with a blocked shot in the game as well.

Nick Spaling had the lone goal for Pittsburgh, putting a rebound past Corey Crawford less than four minutes into the third period. Crawford was exceptional the rest of the day, though, stopping 36 shots against one of the more talented offenses in the NHL.

Ryan Hartman was the low ice time recipient on Sunday, skating only 7:35 with only one shift in the second period and only four in the third. Patrick Sharp, who scored the game-winner in the shootout, also received only four shifts in the third period and skated only 13:04 in the win; coach Joel Quenneville had Sharp on his fourth line with Ben Smith and Marcus Kruger for much of the afternoon, with Sharp occasionally swapping with Kris Versteeg to skate with Brad Richards and Patrick Kane.

Kyle Cumiskey got the start over David Rundblad and skated 10:25 in the win, but was beaten badly by Beau Bennett on the play that eventually ended with Spaling scoring Pittsburgh’s loan goal. Michal Rozsival returned to the lineup and was credited with three hits in 16:42.

Ben Smith also returned, and helped the Hawks successfully kill both of the Penguins’ power plays. Daniel Carcillo was a healthy scratch.