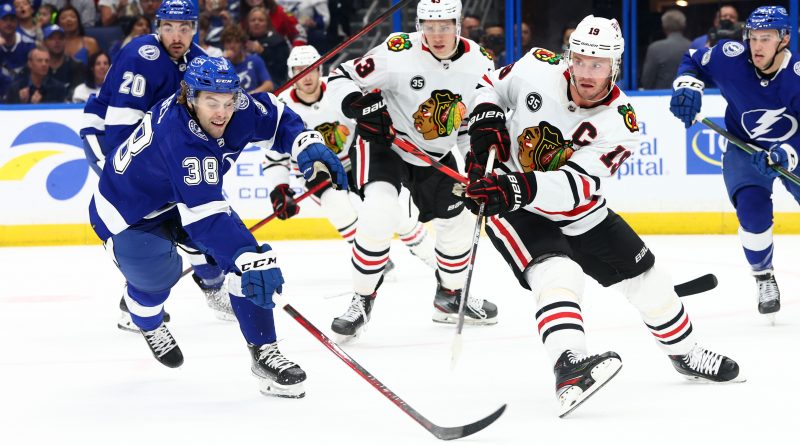 On Thursday night, the Blackhawks celebrated Jonathan Toews’ 1,000th career regular season by watching the Florida Panthers skating around them. It didn’t get easier on Friday across the state in Tampa against the Lightning, who were welcoming Tyler Johnson back for the first time since being traded for Brent Seabrook’s contract.

This was also the reunion game for Brandon Hagel against his former teammates for the first time (and Boris Katchouk and Taylor Raddysh as well).

The start wasn’t ideal for Chicago. Tampa scored the game’s first two goals — both on the power play. Steven Stamkos started the party at 6:11 and Brayden Point added a PPG four minutes later. Note to self: don’t give the two-time defending champions an advantage.

This was not a repeat of Thursday night’s debacle, however. Chicago actually got off the mat and answered the bell. Calvin de Haan cut the lead in half.

Five minutes later, Alex DeBrincat tied the game with his 39th of the season.

After 20 minutes of hockey, the Blackhawks had allowed 19 shots on net while generating only nine. Kevin Lankinen did all he could to keep his team in the game and the offense gave him two goals back to send the game to the second period tied.

The second period was not nearly as kind to the Blackhawks as it was to Ross Colton.

Colton scored his 13th of the season at 6:12 to give Tampa a 3-2 lead. He then added a short-handed goal six minutes later to extend the Lightning lead back to two.

It looked like DeBrincat was going to get the puck for a potential breakaway in the final seconds of the middle stanza but the clock ran out before he could get a shot on net. And the Blackhawks were looking up at a two-goal deficit with 20 minutes left in regulation.

Lankinen had faced 35 shots in 40 minutes while his offense had only put 20 shots on net on the other end of the rink. He was trying… but wasn’t getting much help.

Mr. Hagel added the final goal of the night for Tampa in the third period. The Hawks tried to hang in but couldn’t match Tampa’s depth. Which, sadly, isn’t surprising.

38 thoughts on “No Fooling Tampa, Blackhawks Bounced By Bolts”