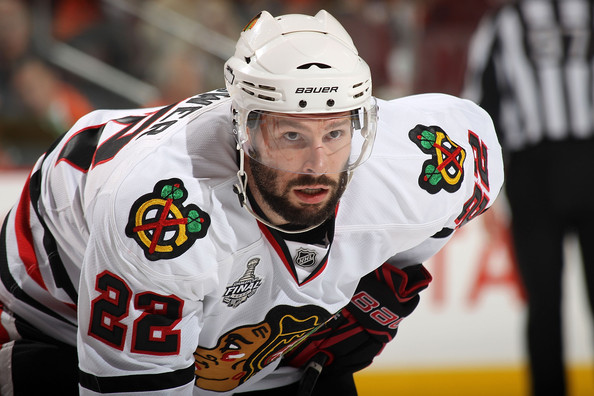 After one of the ugliest losses in recent memory at home on Friday night, the Blackhawks flew to Minnesota hoping to figure out what was going wrong. The team needed to bounce back, and did with a strong win over the Wild.

The team defense, which was a ghost on Friday night, had arguably their best performance of the young season in the win. The 26 shots was well below the number they’ve been allowing all year, thanks to 21 blocked shots. Nick Boynton, the NHL leader in blocks, led the way with six on Saturday night, but more than half the roster was credited with a block.

Troy Brouwer has been in and out of Joel Quenneville’s doghouse all season, and needed to find his groove. If he can continue to play with the same intensity we saw on Saturday night, he’ll stay out of that doghouse and on the ice more often. Brouwer scored his first goal of the season and added an assist, three hits and three blocked shots in over 13 minutes.

The Hawks needed their blue line to pitch in and help the offense in the absence of Marian Hossa and Dave Bolland as well. Duncan Keith picked up the slack by matching Brouwer’s two-point night, assisting on Brouwer’s goal and scoring the game-winner early in the third period.

The Blackhawks hadn’t been physical enough lately, but picked up the pace on Saturday night there as well. John Scott, playing in place of Bryan Bickell, was credited with a team-leading four hits on only eight shifts on the night; Brent Seabrook was also credited with four hits as the Blackhawks totalled 31 hits as a team.

When Jake Dowell put his third goal of the season into an empty net with under a minute to play, the Blackhawks could rest assured that the dominating performance they hadn’t seen all season had finally been completed. The defending champions had shown flashes, but this was the first time the team put together 60 minutes of strong play on both ends of the rink.