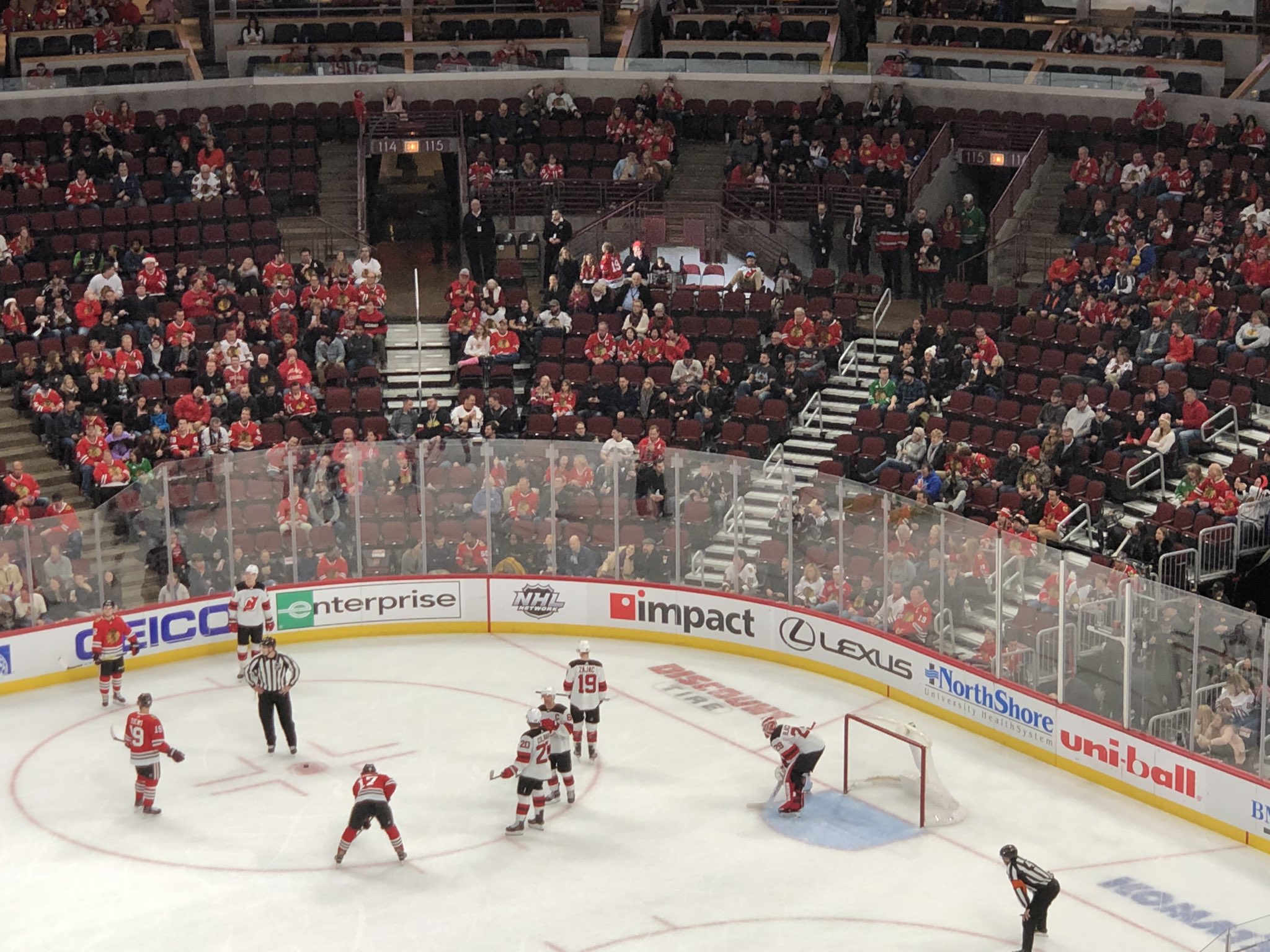 The Blackhawks hosted the Taylor Hall-less New Jersey Devils in their final game before Christmas, hoping to ride the momentum of a couple strong road victories into a game against one of the league’s bottom feeders.

Coming into the game, New Jersey’s offense ranked 30th in the NHL, averaging 2.37 goals per game. They had the 21st-ranked penalty kill. They has won twice in their last 11 games.

And the Blackhawks had just come back with a huge third period in Denver.

The opening 20 minutes was incredibly physical. Jesper Boqvist went to the box 37 seconds into the game for getting his younger brother, Adam, with a high stick. The Blackhawks did nothing on the power play.

Eight minutes later, Dennis Gilbert lowered the boom on Miles Wood as Wood retrieved a puck in his defensive zone. Former Blackhawks forward John Hayden jumped Gilbert and the two dropped the gloves. Not many big punches were thrown but the two went off for their respective five minute majors. Hayden got an extra two for instigating the fight. The Blackhawks did nothing on the power play.

At 12:16 into the first Wayne Simmonds gave Corey Crawford an extra swat after the whistle. The Blackhawks came to their goaltender’s defense. Somehow Jonathan Toews and Simmonds each got matching minors on the play. Nothing happened during the 4-on-4.

Simmonds came out of the box and immediately went high with a hit on Connor Murphy in the corner. No penalty was called.

At 15:54 Travis Zajac went to the box for cross-checking Ryan Carpenter. Before that penalty expired Mirco Mueller joined him for boarding Kirby Dach. Chicago had a two-man advantage for 17 seconds. The Blackhawks did nothing on the extended, nearly-four minute power play.

Two goals were scored amid all the sloppy play. For Chicago, Zack Smith scored his second of the season at 3:21 into the period.

Jack Hughes tied the game at 14:46 after the Simmonds hit on Murphy.

After 20 minutes the Blackhawks were 0-4 on the power play but hat a 14-8 shot advantage. John Quenneville, recalled before the game, skated a while 59 seconds because of the amount of special teams play.

The two Boqvist brothers each went to their dressing rooms early in the first period and did not return. Adam Boqvist was officially ruled out for the rest of the night with a right shoulder issue before the second period began.

PK Subban gave the Devils a 2-1 lead 51 seconds into the second period.

Damon Severson extended the Jersey lead to 3-1 at 7:22 into the second.

Chicago was getting outworked all over the ice in the middle period.

Hayden sniped home his first goal of the season at 10:40 into the second and it was a complete mess at the United Center. Robin Lehner replaced Crawford in the crease; Crawford wasn’t thrilled about the move but he wasn’t having a good night.

Chicago got yet another power play when Sami Vatanen went to the box at 16:47. A goal was scored – by New Jersey. Travis Zajac scored the short-handed goal 36 seconds into the advantage to give the Devils a 5-1 lead and their fourth goal in the second period.

The Blackhawks were out-shot 23-8 in the second period. They allowed four goals, had to switch goaltenders, and looks lifeless for 20 minutes. It was ugly – and that’s being kind. Chicago was chasing four goals at home and had six (6!) power plays in 40 minutes.

Mueller went to the box and Chicago wasted a seventh power play inside the final seven minutes. Most of the fans in attendance had left the United Center.

With 4:12 left in regulation David Kampf went to the box.

The Blackhawks hadn’t lost at home by as much as five since 2004.

So Zacha kicked the extra point, giving the Devils a 7-1 lead inside the final two minutes.

The game ended that way. A six-goal loss at home. Merry Christmas indeed.

82 thoughts on “No Sympathy From The Devils: Blackhawks Embarassed At Home”