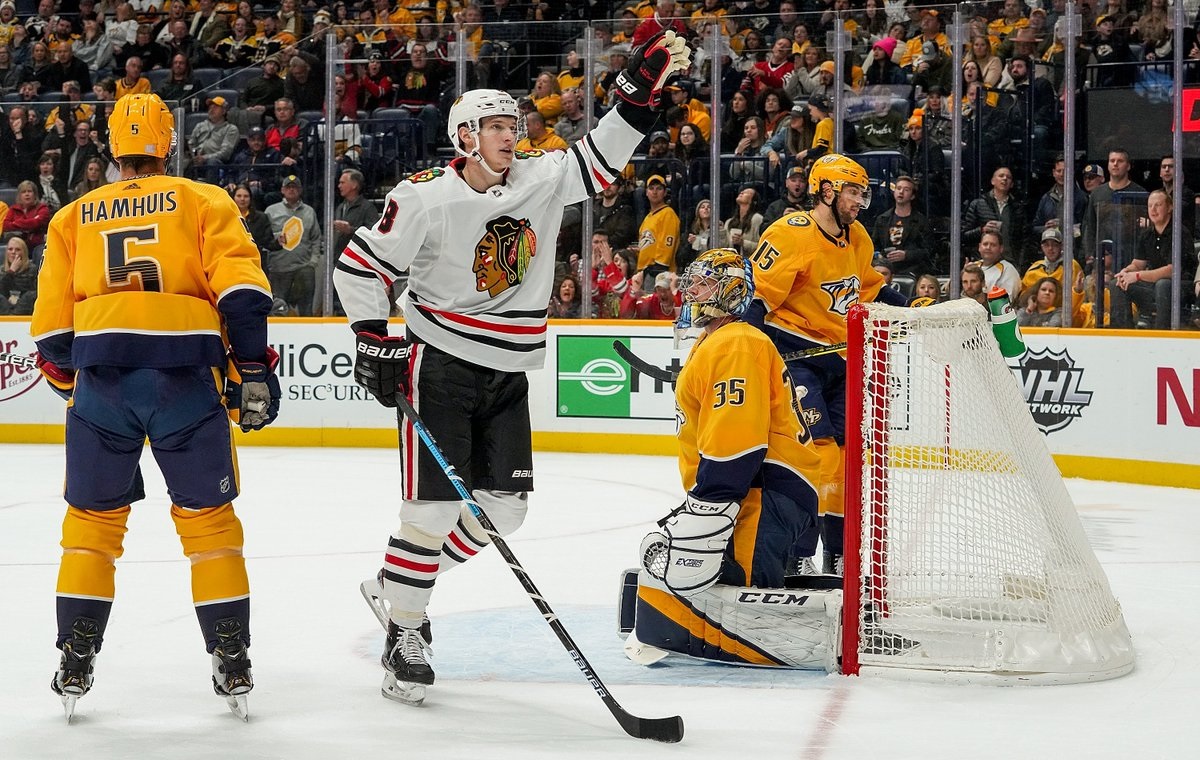 The last time the Blackhawks faced the Predators was one of the worst performances Chicago has put forward in the last decade. Grossly outshot and outskated during the game, Nashville netminder Pekka Rinne said it was one of the “easiest” shutouts of his career.

The Blackhawks took his comments to heart.

And this time, Chicago brought it early and often.

When the dust settled after 60 minutes of hockey, the only Chicago forwards without a point were Zack Smith and Ryan Carpenter.

The last time the two teams met Chicago looked slow and unmotivated. This time they came out flying. The Hawks skated with the Preds up and down the ice in the first period, pushing the pace and turning the game into a track meet as they have been doing with good success lately. Erik Gustafsson got Chicago on the board with his second of the year at 6:33 into the first.

Jonathan Toews picked up the only assist on the Gustafsson goal.

At 18:04 into the first Dominik Kubalik found himself in the right place at the right time and extended Chicago’s lead to two.

At the end of the first period the Blackhawks were getting out-shot 12-9 but were up 2-0 on the scoreboard.

Less than two minutes into the second period Brent Seabrook flipped a backhand shot past Rinne from about 30 feet out.

Patrick Kane and Dylan Strome were credited with the assists on Seabrook’s second of the season.

Chicago kept the pressure on. David Kampf unloaded on a one-timer at 11:39 for his fourth of the year, the fourth of the night for the Blackhawks.

Olli Maatta and Andrew Shaw picked up the assists this time and Rinne’s night was over. Nashville made a change in net after Rinne allowed four goals against just 14 shots in 31 minutes and change.

The Hawks were getting out-shot 26-17 through 40 minutes and had only one power play but were up 4-0. Brandon Saad went to the box with 25 seconds remaining in the second period but Nashville couldn’t convert late in the second or in the opening moments of the third.

Robin Lehner continued to play excellent hockey, making big stops throughout the first two periods. His rebound control wasn’t perfect but his save percentage was, and that’s what ultimately matters.

Roman Josi scored Nashville’s first goal of the night 3:40 into the third. Glimmer of hope?

Chicago scored the next three goals.

Kane, who spoke about remembering Rinne’s comments before the game, scored his ninth of the season at 9:09 into the third.

Then Nylander scored for the first time in 15 games, his third of the year.

After waiting 15 games to score, Nylander waited only 3:26 to score again.

Toews skated only 14:34 but won 11 of 14 faceoffs. He had two assists and one blocked shot. He wasn’t credited with a shot on net.

Kane skated 17:51 with one goal and one assist. He was credited with two shots on net.

Smith, one of the two forward without a point, led Chicago forwards with three shots on net.

Gustafsson and Duncan Keith were the only defensemen who skated more than 20 minutes.

Seabrook led Chicago with four shots on net in 19:55. He also blocked three shots and had a very good night.

Lehner’s night ended with 39 saves against 41 shots. It wasn’t easy, but he earned a solid victory.

Chicago is now 4-0-1 in their last five games and return for a home test against the Buffalo Sabres on Sunday.

27 thoughts on “Not As Easy: Blackhawks Hammer Rinne, Predators”