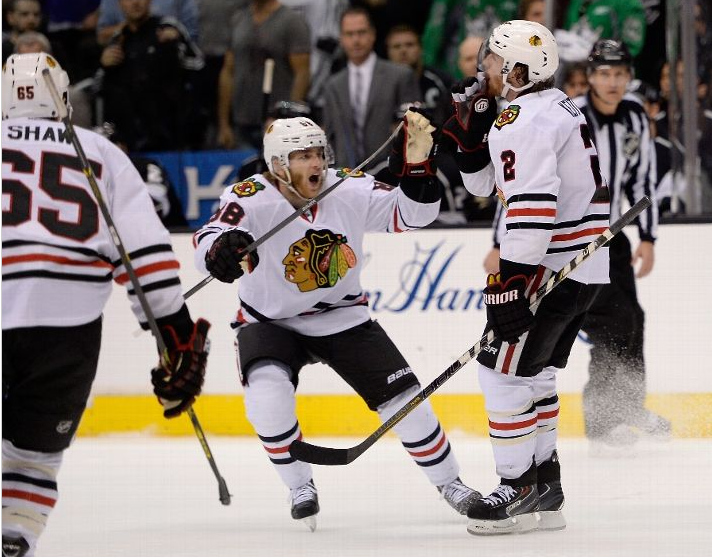 And Patrick Kane has been an absolute beast since the puck dropped in Game Five. With two goals and three points in Game Six, Kane and the Hawks will come home to play Game Seven at the United Center, if you love as much as we do, make sure to check www.slotzo.com/slot-games

The Kings got on the board first as Dwight King gave the home team a lead at 17:03 into the opening period. The Hawks didn’t have a bad first period, out-shooting the Kings 9-8, but bad communication on a dump-in led to Brent Seabrook, Michal Handzus and Johnny Oduya all have a good look at a wide-open King.

Chicago came out and dominated the second period. Kane scored a power play goal to tie the game at 1:12, converting a pretty give-and-go with Jonathan Toews. Less than two minutes later, Ben Smith gave the Hawks a 2-1 lead. Smith banked the puck off Jonathan Quick’s skate and into the net for his fourth goal of the playoffs.

Both teams put 13 shots on net in the second period, and Corey Crawford was up to the challenge. At the end of the period, Andrew Shaw was pushed into Quick and the skaters on the ice engaged in a “polite conversation” after the horn. As Quick skated to the LA bench, Crawford chirped the opposing goaltender and made contact with him.

The third period opened with the Kings bringing sustained pressure. Drew Doughty tied the game at 5:32, and Alec Martinez scored a power play goal with Toews in the box 2:06 later to give the Kings a 3-2 lead.

But the Hawks didn’t give up.

And Kane took over.

Kane carried the puck along the boards and flipped a ridiculous pass to Duncan Keith through traffic, and the Hawks defenseman buried his fourth of the postseason to tied the game at 11:34.

The game remained tied for four minutes, until Kane, Brandon Saad and Andrew Shaw went back to work.

Kane circled the zone and flipped a shot past Quick to give the Hawks a 4-3 lead at 16:15. It was Kane’s eighth of the playoffs and gave him seven point in two games with the Hawks’ backs against the wall.

Los Angeles wouldn’t go away quietly, and the Hawks were able to survive a crazy late push by the Kings with Quick on the bench to emerge with the win. The flurry of saves at the end by Crawford were reminiscent of Marc-Andre Fleury’s efforts at the end of the 2009 Stanley Cup Final, and capped a big night for Crawford.

The Hawks netminder made 26 saves in the game, facing 21 shots in the second and third periods. On the other end of the ice, Quick allowed two of the Hawks’ three third period shots to get past him; he made 21 saves against 25 shots in the loss.

Coach Joel Quenneville once again mixed up his lineup. The game started with the same defensive pairings as Game Five, but Sheldon Brookbank was inserted into the lineup in place of Kris Versteeg. Brookbank only skated 5:09 in the game, with a few of his eight shifts coming at wing and others as a seventh defenseman. Brandon Bollig remained in the lineup and skated only ten shifts.

The Hawks were much better at the dot in Game Six. Smith won all five of his faceoffs, and Shaw won six of nine. Toews finished the night winning 14 of 28, while the Kings’ Anze Kopitar won an uncharacteristic seven of 22.

Michal Rozsival led the Hawks with six hits and Bryan Bickell had four on the night. Brent Seabrook had two assists, three hits and two blocked shots in the game, but was on the ice for two LA goals; Martinez’s shot got under a sliding Seabrook and through Crawford to give the Kings a brief third period lead.

Since Quenneville put Saad, Shaw and Kane together, the Kings haven’t had an answer. Saad has four points in the last two games and has opened the ice up for Kane, who has once again put himself at the front of the Conn Smythe discussion. He now has 18 points in 18 games, and is tied with Toews for the postseason lead with four game-winning goals.

Patrick Sharp skated only 15:03 in the game, spending most of the night on a line with Smith and Marcus Kruger. He picked up an assist on Friday night, his second point of the series. Sharp and Kane led the Hawks with five shots on goal each.

Keith led the Hawks with 24:56 on the ice, while Doughty led all skates with 26:10 on the night. Both defensemen played at a Norris Trophy level in the game, and Doughty did everything he could to end the series on his home ice.

The eyes of the hockey world will be on the United Center when the puck drops for Game Seven on Sunday night. 99 thoughts on “Not So Quick: Blackhawks Force Game 7”