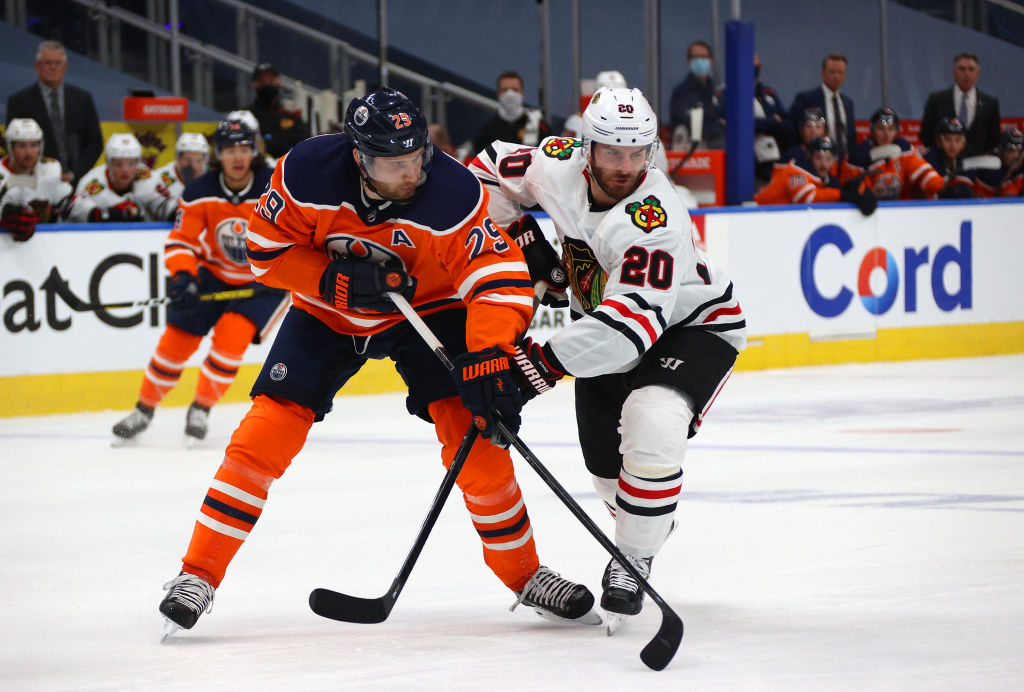 How would the Edmonton Oilers respond to getting blown out in the first game of their qualifying series against the Chicago Blackhawks? They were on home ice, albeit without any fans in the arena, but their elite scoring and speed was neutralized and the Oilers were simply out-worked for most of the opening game.

The answer to that question came 19 seconds into Monday night’s game.

Connor McDavid opened the scoring, as he did in the first game. This goal came before fans had settled into the broadcast.

After McDavid’s goal on Saturday afternoon, Chicago rolled off four consecutive goals. That was not the case on Monday night; McDavid scored his second of the game at 4:05 into the first period.

Edmonton completely dominated the early minutes. And when Chicago got a look at the net, Mikko Koskinen was up to the challenge.

When Duncan Keith went to the box at 4:51, Edmonton had a chance to blow the game wide open – just as the Hawks had done in the previous contest.

The Blackhawks were able to hold the potent Oilers power play off the board for two minutes. With a little momentum from the kill, Chicago was able to cut the lead in half. Patrick Kane scored his first of the series at 9:06.

Both sides settled down after the Kane goal and neither side scored in the final 10:53 of the opening period. The Oilers held a 17-9 shot advantage after 20 minutes and appeared significantly more aggressive than they had at any points in the first game of the series.

The Oilers were back on the attack early in the second period. Tyler Ennis scored an unassisted goal at 1:44 into the middle period to extend Edmonton’s lead back to two.

A couple minutes later, Zach Kassian took a run at Slater Koekkoek and got a big piece of him. But on Koekkoek’s next shift he got even in the best way possible, scoring his first goal of the postseason.

Alex DeBrincat picked up his second assist on as many Chicago goals and Koekkoek had his second point of the night.

After the Koekkoek goal the Blackhawks had a few tremendous opportunities to tie the game. Kassian went to the box and Chicago’s top unit held the puck in the offensive zone for almost the entire two minutes – but without a tying goal.

Riley Sheahan joined Kassian in the box for the final two seconds of the penalty and the Blackhawks effectively had a four-minute advantage. Unfortunately, the four minutes came and went without a tally for the “visitors.”

Matt Benning then went to the box 21 seconds after the Sheahan goal finished. The Blackhawks struggled on this third consecutive power play and failed to score once again.

Give credit where it’s due: the Oilers commitment to shot blocking was clear during the Blackhawks’ power plays. They did a terrific job of taking away passing lanes and keeping shots from reaching the net.

However, the next goal was indeed scored by Chicago. Olli Maatta became the second Chicago defenseman to score in the game, tying the contest at 15:11.

The Blackhawks kept chipping away and taking their shots and finally broke through with a third goal of the night.

Unfortunately, McDavid wasn’t done. Kirby Dach, who picked up an assist on the Maatta goal, went to the box at 16:25 and McDavid banked a shot in off a couple Blackhawks sticks/bodies to give Edmonton the lead again.

Somehow, hats were thrown on the ice for McDavid.

Immediately off the faceoff following McDavid’s goal, Kassian was dropped by a high stick with a bloody nose. Dylan Strome was initially sent to the box, but a video review showed it was Sheahan’s stick that did the damage. Strome came out of the box and the Hawks continued at full strength, chasing one.

Because the Blackhawks’ power play hadn’t been dissapointing enough after three tries in the period, Chicago got a fourth advantage in the final minute of the second. Jujhar Khaira spent the final 60 seconds of the period in the box.

The Blackhawks failed to scored before the horn ended a wild second period that saw six penalties total and both teams score twice. Chicago out-shot Edmonton 10-9 in the period and the Oilers carried a 26-19 shot advantage to the third.

Kubalik had one shot on net more than Strome, DeBrincat and Brandon Saad combined, however. Dach and DeBrincat had two assists each in the first two periods.

And yet, for all of the problems that were easily identifed after 40 minutes, the Blackhawks and Oilers were playing an entertaining game that kept fans awake easily after the 9:30 PM CT start.

Edmonton killed the final 60 seconds of the Blackhawks “power” play to open the third period, making Chicago 0-for-4 in the game. At least we can say the Hawks were in mid-season form on that unit.

Crawford tried to play a puck seven minutes into the third and it backfired terribly. James Neal was credited with the goal to extend the Oilers’ lead back to two.

Neal drove Adam Boqvist about 15 feet into the crease, crashing the net 40 seconds later and three Blackhawks circled the Oilers forward and Crawford. Unfortunately, the puck was loose and found Alex Chiasson, who made the score 6-3 in favor of Edmonton. A stunning, quick turn of events that blew what had been a close game wide open.

Connor Murphy tried to catch up to Andreas Athanasiou a little more than 14 minutes into the third. Unfortunately, Murphy reached out and hooked Athanasiou – and his stick got caught in the forward’s equipment. Athanasiou skated all the way from the blue line to the blue paint with the stick hanging from his right hip. Edmonton didn’t score on the play, but Murphy went to the box (with his stick) for two minutes of contemplation.

With five seconds left in the Murphy penalty, Keith whacked Kailer Yamamoto in the face and joined his teammate in the sin bin. Spending four minutes short-handed inside the final six minutes of regulation isn’t an ideal way to come back, folks.

Crawford finished the night stopping 29 of 35. He was okay for most of the first two periods, but 50 bad seconds in the third period saw the game slip away.

There were two players who stood out as having exceptionally poor performances on Monday night: Boqvist and Strome. Strome, a pending RFA, worked hard to make himself more affordable and Boqvist looked like a nervous teenager.

Plus-minus isn’t generally a stat one points to as a good summary of an individual’s performance, but it was on point with Strome. He was minus-four in 12 minutes with zero shots on net and having won five of 11 faceoffs. He was bad.

Boqvist was minus-three with three shots on net but was out of position frequently and physically out-played too often. He skated 12:56 in the game.

John Quenneville replaced the suspended Drake Cagguila in the lineup and was limited to 5:39 on the ice. He was credited with one hit and one blocked shot.

Dach skated 18:35 and had two assists with three hits and one blocked shot. He was plus-three in the game but won only one of eight faceoffs.

Though it came in a 6-3 loss vs the Oilers on Monday, Kirby Dach's 2-assist performance has joined him with Ed Olczyk (3 times in 1985- April 10 vs DET, April 21 vs MNS & May 12 vs EDM) as the only teenagers in @NHLBlackhawks franchise history to record a multi-point playoff game pic.twitter.com/9Ytpzcjipe

Kane led all Blackhawks with five shots on net in 22:42.

Keith led all Chicago skaters with 25:09 of ice time.