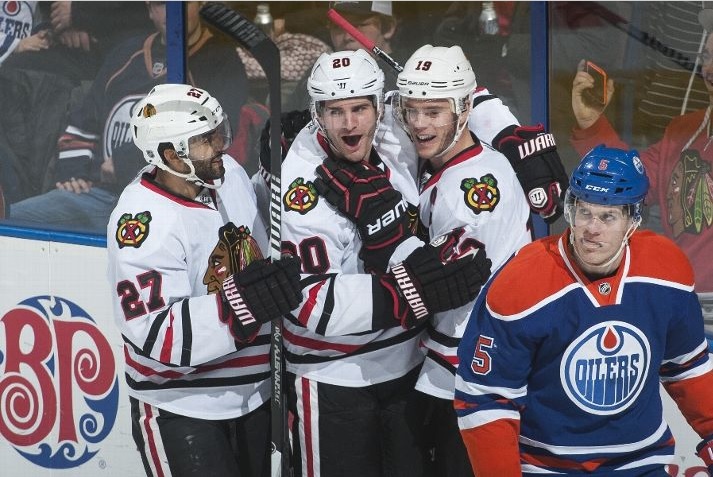 Brandon Saad scored twice, the first of which was his 100th career point in the NHL, but he was the sum of the Blackhawks offense as the host Edmonton Oilers hammered the visitors 5-2. Antti Raanta got the start for the first time since Dec. 23, and had a team in front of him that was playing their third game in four nights and got in from Minnesota early Friday morning. Those excuses aside, the Hawks continued to show a few frustrating trends in a loss to one of the league’s worst teams.

The Hawks only put 21 shots on net in the game, with six in the first and third periods, respectively and nine in the second. Only one line – the Saad-Toews-Hossa line – produced any offense; on Thursday night in Minnesota, the line of Kane-Richards-Bickell accounted for three of the four goals.

Teuvo Teravainen returned to the lineup and showed more confidence in the second and third periods while skating on a line with Patrick Sharp and Andrew Shaw. He made a few nice passes – one to Sharp, who whiffed on a one-timer, and one to Shaw who couldn’t tap the puck in close – and was credited with two blocked shots, one hit and one takeaway skating primarily as a wing. Teravainen won one of only two faceoffs in the loss, and failed to put a shot on net.

Joakim Nordstrom didn’t get on the ice in the third period; he was limited to nine shifts and 6:16 in the game. Marcus Kruger skated only 8:37 one night after a nasty hit from behind in Minnesota.

Richards was the best Hawks player at the dot, winning nine of 12, and was credited with two blocked shots. He was minus-three in the game, however, as were Kane, Brent Seabrook and Duncan Keith.

After scoring two goals against the Wild, Bryan Bickell was credited with a team-high eight hits on Friday night.

Friday night also marked only the second time all season that the Blackhawks allowed a power play goal for a second consecutive game. Unfortunately, the other occurrence also came in the last six games.

The Hawks will return for a nice four-game homestand at the United Center, where they’ll look to get the offense back on track with another crack at the Minnesota Wild on Sunday.