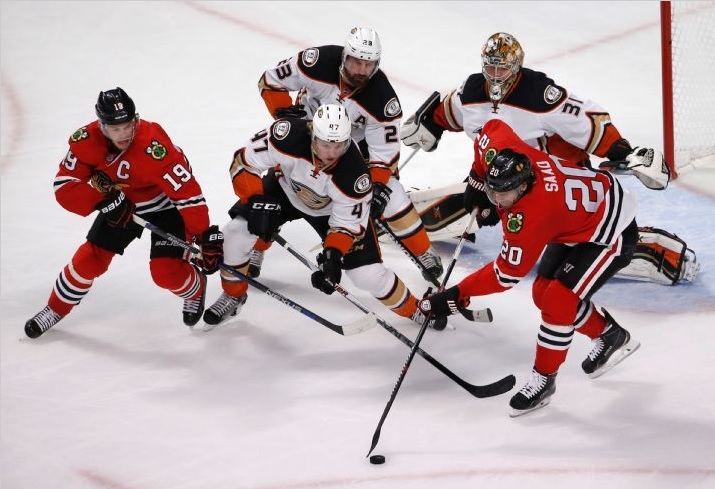 After playing almost two full games in Anaheim on Tuesday night, it took only 60 minutes for the Ducks to dispose of the Blackhawks and reclaim home ice advantage.

Special teams played a huge role in the Hawks Game Two victory, but they came up short at the United Center. Chicago had three power plays in the first period and five total in the game, but failed to generate anything offensively. Anaheim, on the other hand, were stagnant on their power play in Game Two but converted on their only advantage in Game Three.

Patrick Maroon scored on the power play at 12:55 in the first, redirecting a Hampus Lindholm shot past Corey Crawford. Corey Perry was parked in front of Crawford and the deflection from Maroon was true.

Despite failing on three power plays in the first period, Patrick Kane tied the score with 57 seconds remaining in the period.

That would be the only goal of the game for the Blackhawks, however, as Andersen played well and Chicago failed to convert on the few chances they were able to generate in the final 40 minutes.

The Ducks countered the Blackhawks’ final minutes goal from the first period with one of their own at the end of the second. With Maroon and Perry creating traffic in front, Ryan Getzlaf found Simon Despres who didn’t miss. The game-winner came at 19:05 into the second and closed the books on scoring for Thursday night.

Crawford made 25 saves in the loss, but spent the last two minutes on the bench as his teammates desperately tried to generate a quality scoring chance. Kane received a pass from Jonathan Toews and had a good look at the net, but his shot went wide in the final ten seconds of the contest.

Andersen made 27 saves to earn the victory.

Kris Versteeg and Joakim Nordstrom dressed in place of Antoine Vermette and Teuvo Teravainen, and neither did much to help the cause. Versteeg was credited with three hits and generated one shot on net in 13:31, but didn’t look in rhythm the entire night. Nordstrom blocked two shots and was credited with three hits, but only played 7:06 in the loss.

Keith was one of three Blackhawks skaters to block two shots in the game. After coming up only nine seconds short of 50 minutes on the ice on Tuesday night/Wednesday morning, Keith skated 28:04 on Thursday. Brent Seabrook, who set up the game-winner in Game Two, led all skaters with 28:56 in the game. Niklas Hjalmarsson (19:01) and Johnny Oduya (19:20) weren’t relied on as heavily.

Three Hawks forwards – Nordstrom, Marcus Kruger (8:43) and Andrew Desjardins (9:20) – were held to under ten minutes on the ice, while both Kimmo Timonen (6:50) and Kyle Cumiskey (8:51) saw limited action after the longest game in Blackhawks history.

Coach Joel Quenneville threw his lines into the blender again, and with limited success at the dot from Andrew Shaw and Brad Richards, Chicago relied heavily on Toews to control the faceoff circle. And he did; the Hawks captain won 21 of 27 faceoffs in the loss, his best night of the series by far.

Bryan Bickell once again led the way with six hits but did nothing to impact the offense.

Game Four is Saturday night at the United Center, with the Blackhawks trailing in the series once again.

96 thoughts on “One Goal: Not Enough. Blackhawks Lose Game 3 At Home”