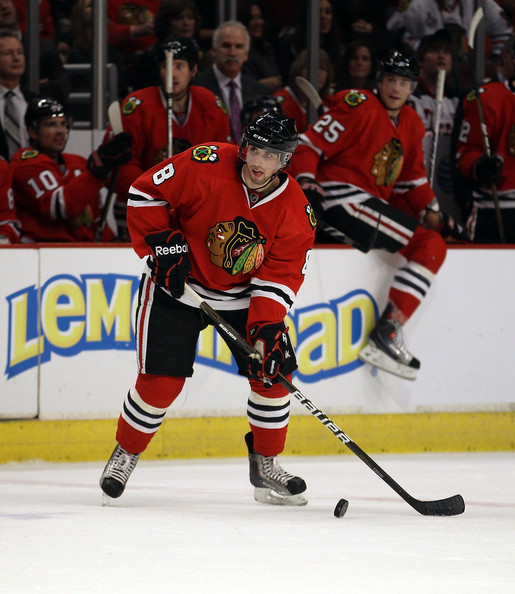 On Feb. 12, 2010, the Blackhawks dealt defenseman Cam Barker to the Minnesota Wild just before the Olympic trade freeze. At that time, the 24-year-old had four goals and 10 assists and was a plus-seven in 51 games.

In exchange for Barker, the Hawks picked up Kim Johnsson and the Wild’s first pick in the 2009 Draft, Nick Leddy.

Johnsson disappeared off the face of the earth after playing in only eight games with Chicago. He hasn’t been heard from since. And, with a Stanley Cup championship in the rear view mirror, the organization obviously didn’t need him; indeed, Barker had been eclipsed by Niklas Hjalmarsson by the time he was dealt, and was being paid top-four money to be a fifth wheel.

So far this season, Barker has only five points (one goal, four assists), is minus-10 with 18 penalty minutes in 39 games for the Wild.

Meanwhile, Leddy has as many goals as Barker in only 13 NHL games as a teenager; he doesn’t turn 20 until March 20 this year.

What makes matters worse for Minnesota is that Leddy, who was drafted out of Eden Prairie High School, was Minnesota’s “Mr. Hockey.” He was a home-grown talent that many scouts were excited about heading into the 2009 Draft, and could have grown up to become an outstanding local hero.

But it goes deeper than a potential home-town hero being dumped for a one-time #3 overall pick (behind Ovechkin and Malkin, mind you).

Meanwhile, Leddy has six hits and 13 blocked shots this year. He is averaging 13:51 per game, and has already started to creep into the special teams rotation for the Hawks despite the four outstanding veterans ahead of him on the roster.

Blackhawks GM Stan Bowman accomplished a major goal by trading the underwhelming Barker to Minnesota and getting two years of too much money off the Chicago books, and clearly didn’t hurt the Hawks chances of winning in the process. Now, the Blackhawks appear to have a better defenseman developing in the NHL that’s five years younger and one-third the cost.