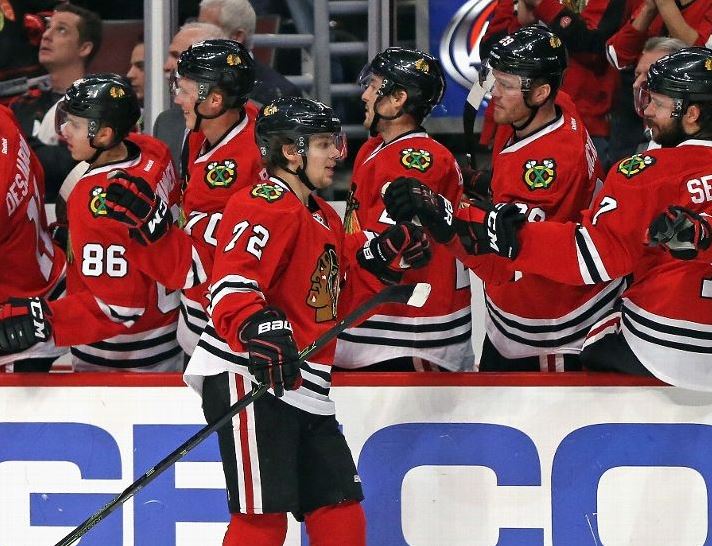 For the second time in as many nights, Artemi Panarin had Marc-Andre Fleury’s number.

Panarin, who scored twice – including the overtime game-winner – on Tuesday night in Pittsburgh beat Fleury twice in Chicago on Wednesday night to lead the Blackhawks. His first came 15:58 into the first period, and the second broke a tie game at 8:56 into the third. He now has 15 goals on the season.

Evgeni Malkin scored his 19th of the season in the second period on a Penguins power play to tie the game, but the Hawks carried the action over the first 40 minutes. Even with more struggles controlling the puck and getting it out of the zone at times, Chicago held a 25-11 shot advantage entering the third period.

To his credit, Fleury kept his team in the game while the Blackhawks dominated puck possession.

Panarin’s first goal came at the end of an extended shift at the expense of Sidney Crosby’s line. Patrick Kane and Artem Anisimov were credited with assists, but Panarin circled the zone and put a missile through Fleury to open the scoring.

After allowing a power play goal to Malkin in the second, the Hawks were forced to kill two penalties with key players – Marian Hossa and Duncan Keith – in the box. Both kills were strong, however, with Teuvo Teravaien getting more work on special teams. Andrew Desjardins and Anisimov were especially good on the kill.

After struggling at the dot on Tuesday, rookie Phillip Danault had a much better night. He won blank de black faceoffs, and the third line was on the ice with less than two minutes left in regulation as the Pens pulled Fleury, and Teravainen scored into an empty net with 66 seconds left to put the game away. It was Teravainen’s ninth of the season.

With 40 seconds left, Kris Letang took a run at Panarin because that’s easier than making a positive impact for the Penguins either night. Jonathan Toews too exception and went after Letang, and both were sent to the showers with 34 seconds left in regulation.

Letang finished the night minus-one with an assist on Malkin’s goal.

Toews won nine of 20 faceoffs and put three shots on net. He matched up with Crosby most of the night kept him off the scoreboard.

The fourth line once again saw limited action in the game, but Ryan Garbutt was noticeable. He was credited with one hit and three shots on net in only eight shifts and less than six minutes of ice time.

Scott Darling got the start and made 17 saves against 18 shots to earn the victory. Fleury was fantastic in defeat, stopping 34 of 36. But the Hawks defense was on lock-down and Darling took care of business.

With two wins in two nights, the Hawks will return to the United Center ice to host the Buffalo Sabres on Friday night.