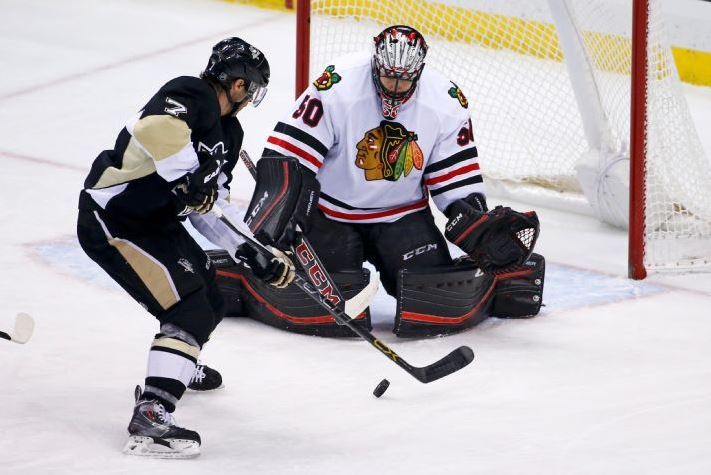 The Blackhawks played charitable hockey for most of the game, but escaped with a win on Tuesday night.

Chicago and Pittsburgh exchanged opportunities through the first period with both teams putting seven shots on net without any success. The Pens killed the only penalty of the opening 20 minutes when Kris Letang went to the box.

The best action of the first period came with 55 seconds left when Andrew Shaw unloaded on former teammate Trevor Daley.

In the second, the Penguins dominated the puck. Chicago gave the puck away far too frequently and struggled to get the puck out of their defensive zone, but Corey Crawford stood tall. He stopped all 21 shots he faced in the first two periods and was the best Hawks player by far through 40 minutes.

The Hawks withstood a furious shift from Sidney Crosby’s line that last more than a minute in the Pens’ offensive zone, but were able to get a change and turned the ice around with a 2-on-1 for Patrick Kane and Artemi Panarin. Kane dished to Panarin for the filthy one-timer and the Hawks got on the board first at 8:47 into the second.

Almost ten minutes later, the Hawks extended the lead to two. Brent Seabrook put a blast into traffic in front of Marc-Andre Fleury and it bounced off Jonathan Toews and trickled across the line. Toews’ 14th of the season came after a good faceoff win against Crosby.

Frankly, Chris Kunitz was arguably the Blackhawks best defenseman in the first two periods. He consistently refused to pull the trigger, insisting to make an unnecessary extra pass that cost his team a good scoring chance on multiple occasions.

Chicago continued to play hot potato with the puck and Crosby made them pay. Pittsburgh’s captain buried his 12th of the season to cut the lead in half at 5:54 into the third period. Crosby nearly tied the game on his next shift as Pittsburgh was the only team attacking for the first half of the final frame.

After the Crosby goal, the Hawks spent the better part of 15 minutes clinging to a lead with very little offense, and it caught up with them. With 2:50 left in regulation, Crosby won a faceoff against Artem Anisimov and Letang buried the game-tying goal.

In the midst of another struggling period, Andrew Desjardins had a really good third period. His confidence is clearly high since being put on a line with youngsters Teuvo Teravainen and Phillip Danault, and that line continued to be effective all over the ice.

The Hawks showed some offensive jump for the first time in the period after Letang tied the game, but the game headed to overtime. Crawford made 29 saves against 31 shots in regulation while Fleury made 23 saves; Pittsburgh out-shot Chicago 24-18 in the final two periods, and were able to beat Crawford twice in the third to extend the game to free hockey.

Panarin unleashed a filthy game-winning goal to end a fantastic, furious, back-and-forth overtime in which both goaltenders made amazing saves against great scorers.

It took 3:47 for Panarin to end the game, but there was concern for Hawks fans from the end of the first shift. Toews labored to get off the ice after the first shift of the overtime period and went straight to the dressing room. He did not return, but his teammates picked him up to earn the second point.

Crawford made five saves in the overtime, and the Hawks’ fifth shot beat Fleury to end the game – incredible action that ended with a Hawks winner.

Chicago’s captain was named the third star of the game after winning 10 of 16 faceoffs and putting four shots on net in 21:05. Andrew Shaw, once again skating with Toews and Marian Hossa, led the way with four hits. Kane and Seabrook picked up two assists each, and Niklas Hjalmarsson led Chicago with four blocked shots.

Desjardins led the Hawks with five shots on net as his line combined for 10 of the team’s 30 shots in the win. Danault won just five of a team-high 17 faceoffs but was credited with two blocked shots and one takeaway as he continues to impress.

Bryan Bickell skated a team-low 5:39 with one hit and one blocked shot. Dennis Rasmussen (6:30) and Ryan Garbutt (7:04) were also on the Hawks’ fourth line with Brandon Mashinter a scratch once again.

After the game, coach Joel Quenneville said Toews would be fine.

These two teams will go at it again on Wednesday night in Chicago.