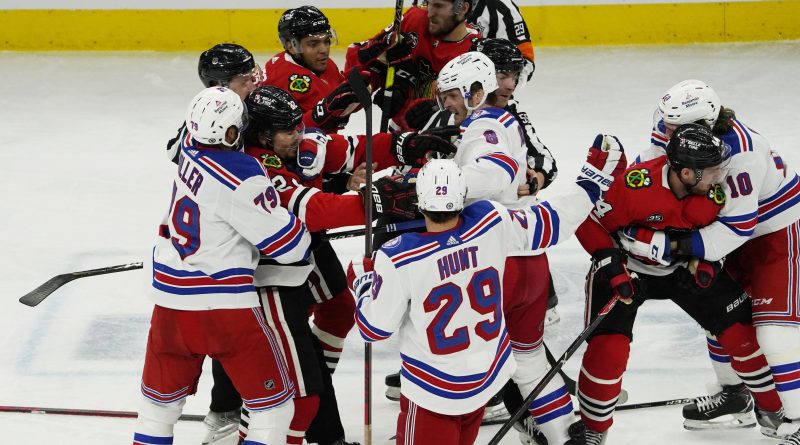 It took 61 seconds for Panarin to get the one point he needed for 500. He set up Jacob Trouba for the game’s first goal barely a minute into the contest and we were off to the races.

The Rangers held that lead for… 43 seconds. Off an offensive zone faceoff, an Erik Gustafsson shot from the blue line somehow made its way through the traffic and past Alexandar Georgiev into the net to tie the game at one.

After the Chicago goal, the Rangers enjoyed an extended period with the puck in the offensive zone but Fleury was on point. When the Blackhawks got the puck back to the other end of the ice they, too, were able to effectively put together some sustained offense.

At 7:09 into the first, Kirby Dach found a loose puck and finally, finally scored a goal.

Fleury made a few really good saves the rest of the way in the first period to hang onto the lead. Both teams put nine shots on net in the first; Chicago scored twice.

The Rangers got the game’s first power play two minutes into the second period and they made the Blackhawks pay. Panarin scored off a neat pass from Mika Zibanejad to tie the game at two.

Six minutes into the second period the entire feeling on the ice and in the arena changed. Trouba absolutely hammered Juhjar Khaira, whose head was down trying to handle the puck. Trouba went for a big hit; Khaira’s head being down made a potentially big hit a scary situation. Khaira was out cold when he landed on the ice and did not move before he was placed on a stretcher and helped from the ice.

Here’s a slow-mo look at the hit on Khaira.

Scary scene at the UC…

Here's a closer look at the Trouba hit on Khaira pic.twitter.com/Zxs22Juu0s

No penalty was assessed to Trouba. Riley Stillman dropped the gloves with the Rangers’ defenseman a few minutes later but he really shouldn’t be dancing with someone like Trouba.

After the Trouba hit on Khaira the parade to the penalty boxes continued the rest of the period. Panarin, Dryden Hunt and K’Andre Miller all went to the box for the Rangers, giving the Blackhawks two power plays in the period; Miller went off with seven seconds left in the period so the Blackhawks would open the third with the advantage.

When the dust settled from an emotional 20 minutes, the Rangers had out-shot the Hawks 13-8 in the second period and had the only goal. The game was tied heading to the third.

Before the third period, the Blackhawks tweeted that Khaira was taken to the hospital.

MEDICAL UPDATE: Jujhar Khaira suffered an upper body blow in the second period of tonight’s game. After initial evaluation on the ice he was taken by ambulance to Northwestern Hospital for further testing.

An update will be provided when available.

Five minutes into the third period with Dach in the penalty box, Chris Kreider redirected an Adam Fox shot for his tenth power play goal of the season, giving the Rangers a 3-2 lead. Panarin picked up his second assist and third point of the night on the goal.

Chicago got a power play 50 seconds after the Kreider goal with Trouba in the box but couldn’t convert.

Kevin Rooney extended New York’s lead to two at 12:10. The Blackhawks looked gassed, trying to keep up. The Rangers just looked a step faster than the Blackhawks all over the ice in the third period. Which, we could say was because of the emotions after the Khaira hit… but the same was true at MSG on Saturday night.

The Blackhawks pulled Fleury for an extra attacker with roughly 3:30 left in regulation and, of course, Panarin found the empty net for his second goal and fourth point of the night. Now the Hawks were chasing three with three minutes remaining.

With a little less than three minutes left in regulation, Ryan Carpenter hammered a Ranger from behind. Ryan Strome didn’t like it (rightfully) and jumped Carpenter. Their nights were over.

Barclay Goodrow made it 6-2 rangers inside the final two minutes. Fleury officially stopped 24 of 29 in the loss.

For the 17th time in 25 starts, the Blackhawks were held to two goals or less. That is not good.

With his four-point evening on Tuesday, Panarin put up seven points (three goals, four assists) in two games in four days against his former team.

Ian Mitchell once again looked like a more confident player. On this night he got into the power play instead of the penalty kill. Mitchell finished the night skating 18:17 with two blocked shots. He was on the power play for 1:28, which ranked third among the Hawks’ defensemen behind Seth Jones and Gustafsson.

Regarding Fleury, he entered historic company just by taking the ice on Tuesday night.

Tuesday night was Alexis Lafrenière’s first game at the United Center. He had the least ice time among all Rangers forwards and was credited with zero shots on net and only two hits.