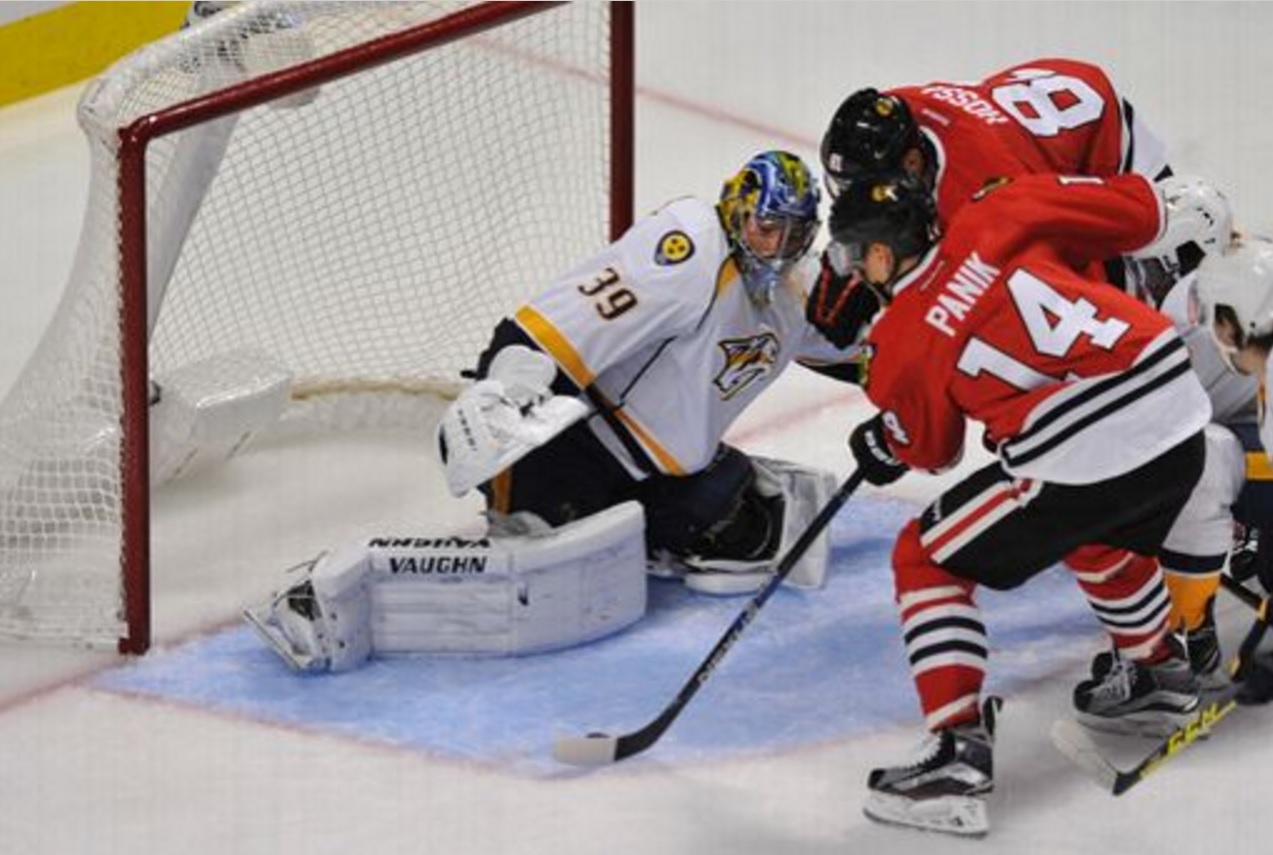 Richard Panik stole the show and Scott Darling played big between the pipes as the Blackhawks finally got into the win column on Saturday night.

The Blackhawks sprinted out to a 3-0 lead in the opening 10:16 of the game. At 6:36, rookie forward Nick Schmaltz scored his first career NHL goal.

Rookie Tyler Motte picked up the only assist on Schmaltz’s goal.

Mike Riberio went to the box at 8:13 for delay of game and, for a fun change of pace, it was the Blackhawks scoring a power play goal. Brent Seabrook unloaded and beat Nashville netminder Marek Mazanec to extend the lead to 2-0.

Exactly two minutes after Seabrook’s goal, Panik scored his second of the season.

Nothing has been easy for the Blackhawks this season, and Saturday night was no different. Colin Wilson scored his first of the season with 89 seconds left in the first period to cut the lead to 3-1.

Nashville scored another goal inside the final two minutes of the second period. Artem Anisimov was in the box and Craig Smith scored six seconds into the advantage to make the score 3-2 through 40 minutes.

Ryan Johansen went to the box for high-sticking 2:57 into the third period and the Hawks scored their second power play goal of the night. Panik, again.

It looked for a moment like Marian Hossa may have (finally) scored the 500th goal of his career, but it was Panik’s third of the season.

Viktor Arvidsson cut the lead to 4-3, beating Brian Campbell to the net and beating Darling.

But the Hawks wouldn’t be denied. Patrick Kane made a Patrick Kane play, feeding Panik on the doorstep to complete the hat trick.

After losing their first two games of the season by 5-3 and 3-2 scores, the Blackhawks turned the tables and won a game 5-3 in front of a raucous United Center crowd.

Darling allowed three goals against 36 shots but made a number of spectacular saves to maintain the lead. The skated in front of him blocked 17 shots in the game as well.

Dennis Rasmussen was in the lineup in the place of injured Ryan Hartman and played well. He skated on the second penalty kill unit with Jonathan Toews and finished tied for the team lead with three blocked shots in the game. Rasmussen was also credited with two hits and one takeaway in 12:35.

Schmaltz only skated 12:08 in the game but won five of 11 faceoffs and added two hits and one takeaway to his first career goal. Motte led Chicago with three takeaways and blocked two shots in 14:10 as the Hawks’ continue to get solid production from a couple impressive rookie forwards. Motte continued to work with Marcus Kruger on the top penalty kill unit as well.

Duncan Keith and Kane had two assists each to join Seabrook (one goal, one assist) and Panik as the Hawks had four players with a multi-point effort.

Perhaps most importantly, the Blackhawks’ veterans who collectively showed frustration and willingly lost their cool in Nashville on Friday night avoided the penalty box. Only Anisimov and Jordin Tootoo served penalty time on Saturday night, and the Blackhawks successfully killed one of the two advantages.

Campbell and Gustav Forsling had a rough night at the office. They combined for four hits and three shots on net, but were on the ice for 21 and 22 Nashville shot attempts, respectively. By comparison, Seabrook was on the ice seven full minutes longer than Campbell and there were only 16 shot attempts against while he was in play. Seabrook also led Chicago with five hits in the game.