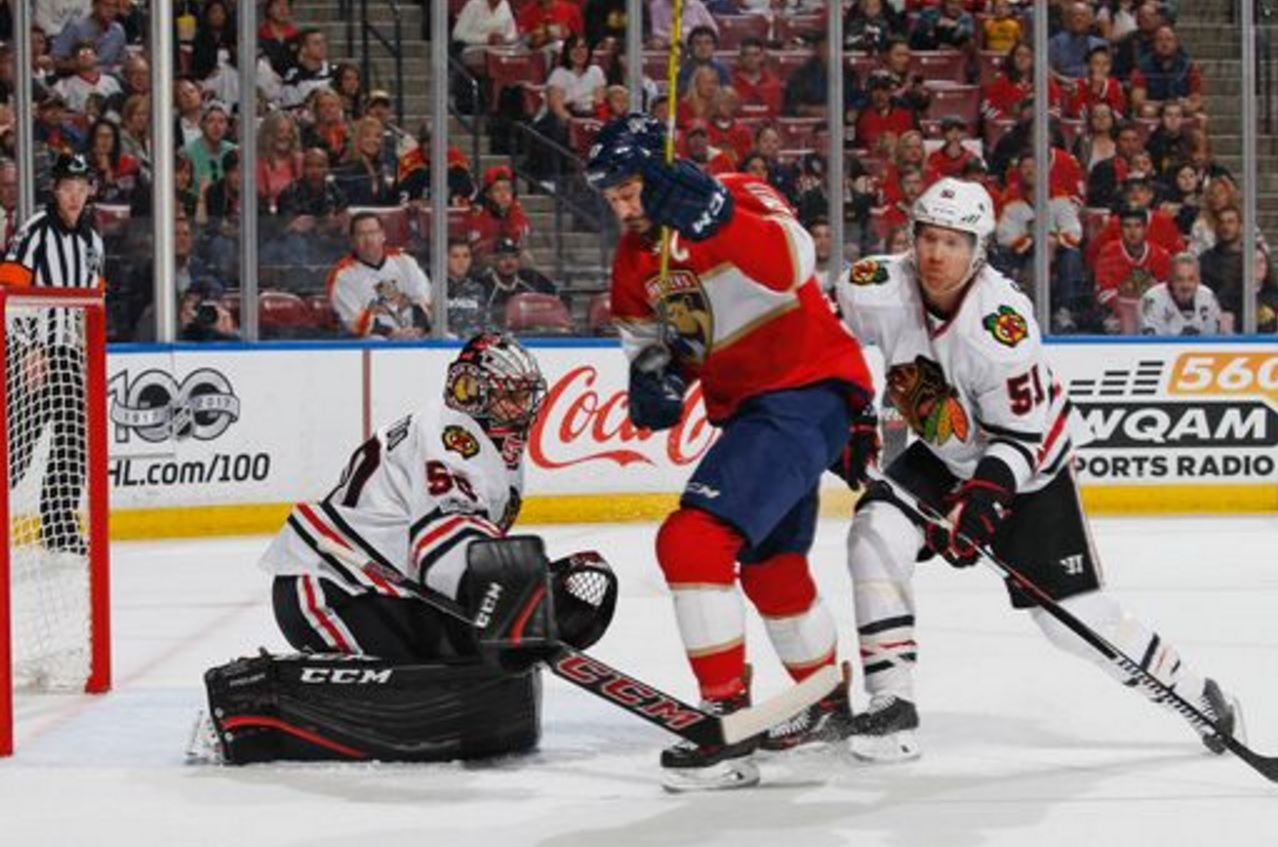 In the first of two games in Florida, the Blackhawks came out looking like a team that would have preferred to be on the beach.

Chicago held a 9-8 shot advantage after 20 scoreless minutes. The Hawks and Panthers both killed a penalty in the first. Other than that, not much happened.

The second period was all about Aleksander Barkov.

Barkov opened the scoring 17 seconds into the second off a nice pass from Jonathan Huberdeau.

Ten minutes later, with both Ryan Hartman and Marcus Kruger in the box, Barkov returned the favor to Huberdeau and it was 2-0 Florida. Jonathan Marchessault scored his 26th of the season 79 seconds later to push the lead to 3-0 and the Hawks looked absolutely flat. Barkov and Huberdeau had assists on the Marchessault goal, giving Barkov three points in the period and Huberdeau two.

The Panthers were out-skating and out-working the Blackhawks all over the ice and it was reflected on the scoreboard. Chicago had two power plays while chasing three – first with Vincent Trocheck in the box and later with Marchessault sitting – but failed to get a good scoring opportunity on either advantage.

After 40 minutes, Florida was out-shooting Chicago 22-17 but, somehow, the Panthers were 1-5 on the power play. Hartman and Kruger had four penalty minutes each in the second, while Patrick Kane and Richard Panik also went to the box during the middle stanza.

It was an ugly period that couldn’t end soon enough.

Marchessault scored his 27th to give Florida a four-goal advantage at 4:59 into the third and that was it for Corey Crawford. Chicago’s started left having allowed four goals against 25 shots. He wasn’t sharp, but didn’t get much help from the skaters in front of him either.

For the first time in the game, the Blackhawks showed some fight – literally – 80 seconds after the Marchessault goal. Andrew Desjardins dropped the gloves on one site of the ice with Shawn Thornton (not a good idea) and Richard Panik threw down with Derek MacKenzie on the other side simultaneously. Panik understandably performed better in his bought than Desjardins did; Panik and MacKenzie both picked up 10 minute misconduct penalties as well.

Did the fights help?

Marchessault completed his first career hat trick 54 seconds after the fights, giving him 28 on the year. Huberdeau and Trochek picked up assists on the fifth Florida goal of the night, giving Huberdeau a four-point night.

Nick Bjudstad then jumped into the scoring parade to make the score 6-0 in favor of the Panthers.

Feeling left out, Reilly Smith scored to make the score 7-0 at 11:45 into the third. Trocheck picked up a second assist on the Smith goal.