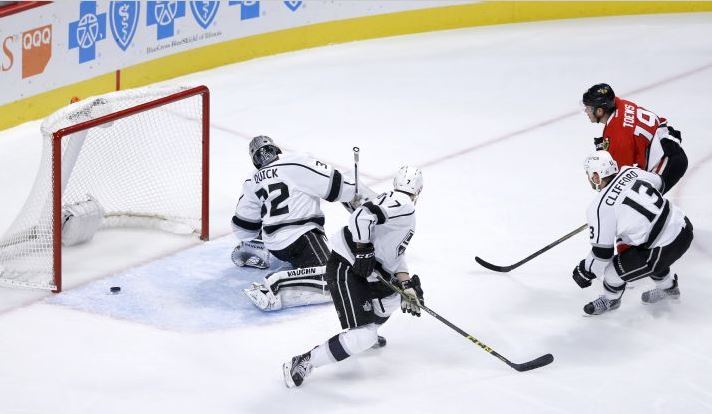 It took 40 minutes for them to wake up, but the Blackhawks were flying in the third period as they came back to beat the Los Angeles Kings at the United Center on Monday night.

In the wake of a series of roster moves, and with Marian Hossa out of the lineup while still suffering from a lower-body issue, the Hawks had to mix up their lines yet again.

The top line got it going early. Jonathan Toews opened the scoring six minutes into the game, receiving a pretty pass from Ryan Garbutt and making the deposit. Artemi Panarin moved from his spot with Patrick Kane and Artem Anisimov up to the Toews line and he was able to show flashes of dazzling puck-handling ability throughout the game. Panarin picked up the second assist on Toews’ goal.

LA came back with two goals in a little more than four minutes late in the first to take a 2-1 lead to the dressing rooms. Alec Martinez and Anze Kopitar were on the scoring end for the Kings, but that would be the extent of their offense on the night.

In the third period, it was the Hawks’ new-look second line that came to the forefront.

Teuvo Teravainen joined Anisimov and Kane and the line was accountable for three goals in a third period that was completely dominated by Chicago. Kane tied the game with his seventh of the season 82 seconds into the third, taking a pass from Brent Seabrook and putting it home.

Then Kane set up Teravainen with this ridiculous pass.

The Kings were able to hang within one until Anisimov scored a short-handed goal inside the final two minutes of regulation to put the game away. Toews had the only assist on the shorty, giving him a two-point night.

Toews had a dominant night once again. In addition to his fifth goal of the season and late assist, the Blackhawks’ captain won 20 of 27 at the dot and was credited with one hit and one takeaway.

Kane also had a two-point night, adding his highlight reel pass to Teravainen to the game-tying goal. He was credited with two hits(!), one takeaway and was one of three Chicago skaters with four shots on net.

Anisimov had a two-point night and won half of his 14 faceoffs. Garbutt also had a strong game. He one again led the team with four hits in 17:13.

Marko Dano, who was called up on Monday, skated on a line with Ryan Hartman and Tanner Kero. Hartman had an awful turnover early in the third and found himself stapled to the bench the rest of the way. Dano skated 11:11 and was credited with one blocked shot and one hit. Kero was credited with only one hit in 12:06 on the night, while Hartman finished with three hits, two takeaways and one blocked shot in only 9:19 of action.

Corey Crawford allowed two in the opening period but slammed the door shut the rest of the way. He made 33 saves, 19 of which came in the third period, and earned a big home victory.

The Hawks are back on the United Center ice on Wednesday night when the Blues pay a visit.