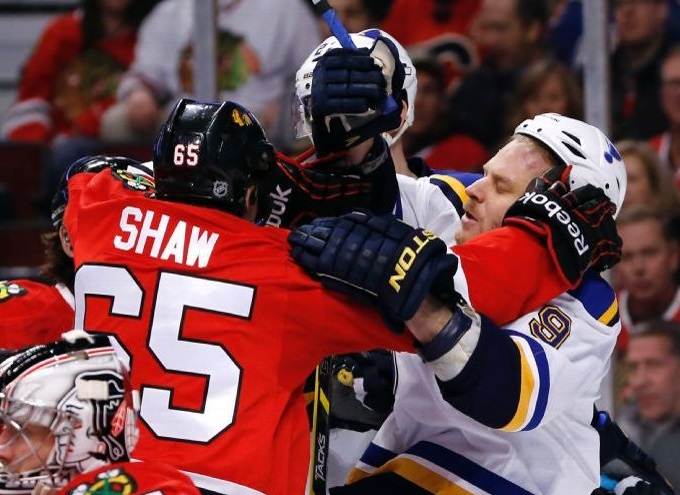 Patrick Kane and Kris Versteeg stayed hot and the Blackhawks used an early third period highlight display to blow away the division-leading Blues.

The day didn’t start very well for the Blackhawks, who returned to the United Center after a couple successful weeks on the road; the team announced starting netminder Corey Crawford will miss the next 2-3 weeks because of an injury.

But Wednesday ended incredibly well, as an offensive explosion led by the usual suspects – Kane and Versteeg – blew the division leading St. Louis Blues out of the building.

After a strong play by Brandon Saad started a 2-on-1 rush, Marcus Kruger gave the Blackhawks a 1-0 lead late in the first period.

The Blues were able to take the Hawks off their game early, however. Chicago had to kill three penalties in the opening 20 minutes, two of which were drawn by Steve Ott. Thankfully, the Hawks were able to handle the short-handed work with relative ease, allowing only three shots while the Blues had the advantage.

On a delayed penalty against Kane in the middle stages of the second period, Ian Cole was able to tie the game.

The game stayed tied until 59 seconds had come off the clock in the third period.

As a St. Louis penalty was ending, Jonathan Toews found Versteeg in front of the net and Versteeg scored what would be the game-winning goal. It is the eighth of the season already for Versteeg, who had only 14 in 91 combined games between two cities over the 2012-13 and 2013-14 seasons.

Only 1:48 later, Versteeg set up Kane for his first of the night. The two would hook up again less than three minutes later for Kane’s second of the night and 12th of the season, making the score 4-1 and putting the Blues away for the night.

Kane had two goals in 18:09 and Versteeg added assists on both of Kane’s goals to his game-winning tally for a three-point night. Toews won 16 of 21 faceoffs with his one assist in a dominant effort from the Hawks at home.

Late in the game, Daniel Carcillo and Brent Seabrook were sent to the showers early as the Blues started their usual cheap shots in a losing effort. Seabrook led the Hawks with four blocked shots in over 25 minutes of ice time in the victory. Duncan Keith had a team-high 27:50 on the ice in the victory.

In his first start in more than a full month, Antti Raanta played a very good game. He allowed only the one goal to Cole while facing 41 shots. The Blackhawks successfully killed six penalties in the game, and Raanta played a big role in the short-handed defense. In one moment of questionable decision making later in the game, Raanta came out to play a puck near the blue line and went down… but the Blues were offsides and couldn’t take advantage of an empty cage.

Bryan Bickell continued his free fall down the lineup, skating a forward-low 7:50 in the game. He was credited with one blocked shots and two hits on 13 shifts; even Carcillo, who was sent packing early, had more ice time than Bickell. David Rundblad also skated 13 shifts, spending a team-low 7:33 on the ice.

David Backes was credited with six hits but won only four of 12 faceoffs and picked up 16 penalty minutes in the loss. Jake Allen allowed all four of the goals against 33 shots with recently-signed Martin Brodeur looking on from the bench.