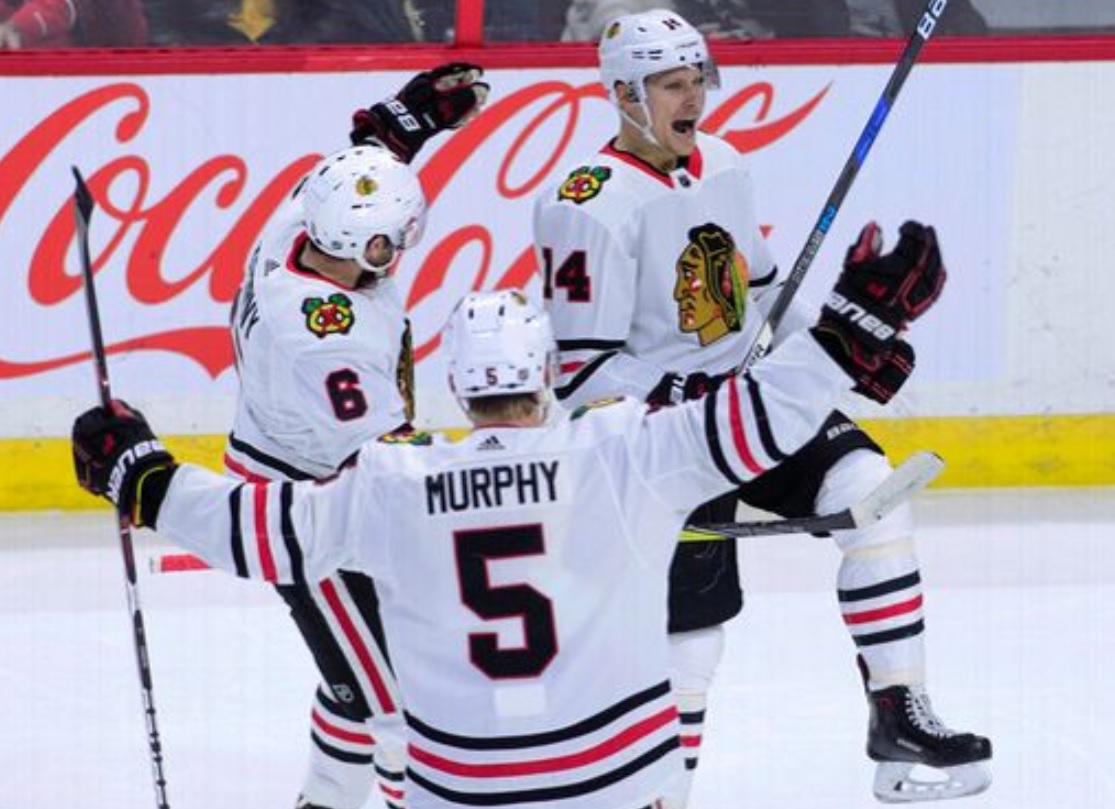 When the puck dropped on Tuesday night in Ottawa it still felt odd that Brent Seabrook was a healthy scratch. Patrick Kane wore the second ‘A’ for the contest, and Erik Gustafsson was with the team (but also scratched).

The Hawks came out firing, but everything was from the perimeter. Craig Anderson held his own for almost 19 minutes but with 69 seconds left in the first Richard Panik scored his first 5-on-5 goal since Oct. 7.

Panik scored five times in his first nine appearances this season but hasn’t scored a goal of any sort since Oct. 21. Connor Murphy and Michal Kempny picked up the assists.

Chicago held a 17-8 shot advantage after 20 minutes and Anton Forsberg came up with a couple good saves to keep the Hawks in front.

The opening period showed that the Hawks were determined to score. In the 40 minutes that followed they were significantly more successful in doing so.

One of the hottest Blackhawks going right now then added to the offense. Patrick Sharp, who just broke out of his own scoring drought last week, scored for the third time in four games to give the Hawks a 2-0 lead.

David Kampf and Patrick Kane were credited with the assists on the Sharp goal.

Since the Blackhawks felt like checking off boxes on the “stuff that hasn’t been working this season” list, they then got a second power play three minutes after the Sharp goal and actually converted an advantage for once!

Nick Schmaltz picked up the goal, keeping him among the hottest scorers in the league; he has now scored in four straight. Kane and Jordan Oesterle were credited with assists on the Schmaltz goal.

Less than two minutes later, Jonathan Toews joined the party and extended the lead to 4-0.

Toews’ 13th of the season was his fourth in five games.

Oesterle and Duncan Keith picked up assists on the Toews goal, meaning four Hawks defensemen had a point half-way through the game. Oesterle’s second assist gave him a second multi-point game in his last four and points in five of his last six games.

With his second assist, Kane had his sixth multi-point game since Dec. 10.

Chicago had scored three times in 4:39 to blow the game open and end the night for Anderson. Ottawa made a change in net after Anderson allowed four goals against 26 shots in under 30 minutes of action.

Everything was going the Hawks’ way through 30 minutes but of course Anton Forsberg couldn’t finish with a shutout. Mark Stone got Ottawa on the board, cutting the lead to 4-1 only 42 seconds after the Toews goal.

Four minutes later a shot was redirected into the net off the body of Derick Brassard and suddenly a comfortable four-goal lead with the Blackhawks cruising was down to two.

Zack Smith went to the penalty box 32 seconds after the Brassard goal. And a suddenly functional Blackhawks power play converted again. And, again, it was Schmaltz.

Schmaltz’s 12th of the season and second power play goal of the period saw assists credited to Kane and Sharp.

Erik Karlsson went to the penalty box 22 seconds after the Schmaltz goal. Certainly the Hawks couldn’t convert a third power play in one game….

Jan Rutta’s fourth of the season came with a fourth assist of the night for Kane. Forsberg picked up the second assist on the Rutta goal.

Of course Ottawa got a power play late in the second with Connor Murphy taking a seat. Forsberg made a huge save in the closing seconds of the period to keep the lead at four.

Through 40 minutes of action, the Blackhawks had a 31-19 shot advantage. Three of the Hawks’ six goals came on the power play. To put that in perspective, Chicago scored four power play goals in the month of December.

The Blackhawks had to kill 1:27 of penalty time to start the third period and the best scoring chance came from Brandon Saad, who outskated everyone and got a decent backhand shot on net but was denied.

Because he was one of the remaining Blackhawks without a point on the night, Vinnie Hinostroza found Toews at 3:24 into the third and the captain scored his second of the night to make the score 7-2.

At 6:24 into the third, Kempny hammered Ryan Dzingel. Ben Harpur took exception and jumped Kempny; Murphy held Harpur back and the two teams were able to finish singing kumbaya as Kempny and Harpur took a seat in their respective penalty boxes.

During the 4-on-4 Saad was called for tripping. Nothing happened for either side during the 4-on-3 and Dion Phaneuf cancelled the final 13 seconds of the Sens’ advantage when he slashed Lance Bouma. During the Blackhawks power play that followed, Kane rifled a shot home to give him a five-point night and the Hawks an 8-2 lead.

Kane’s five-point night was the fourth power play goal of the night for the Blackhawks. There’s no excuse for that in Ottawa. With all due respect, someone should lose a job if you let the 2017-18 Blackhawks score four power play goals.

With 2:16 left in regulation Stone tripped Oesterle and went to the box. Coach Joel Quenneville rolled out the fourth line to start the power play; they earned the special teams time with a solid night across the board even with the blowout putting the game out of reach.

It was the first time in his career that Kane posted five points in a game. He did that with only three shots on net and also picked up a blocked shot, but was minus-one somehow. Schmaltz was minus-two in spite of his three-point effort.

Toews led Chicago with seven shots on net and was credited with a team-leading two takeaways. Chicago’s captain won eight of 18 faceoffs and scored twice.

Panik returned to looking like the guy the Hawks gave a two-year contract in Ottawa. He was credited with five shots on net, two hits, one takeaway and one blocked shot.

Oesterle had another outstanding night. He skated almost 24 minutes and was credited with two assists, a team-leading three blocked shots and two hits. Gustav Forsling was the only Hawks defenseman who failed to register a point in the game.

Forsberg was good, making the saves needed. He stopped 25 of 27 in the win.

The Blackhawks improved to 4-1-1 in their last six games – all without both Corey Crawford and Artem Anisimov. They return to the United Center on Wednesday night to face Minnesota.