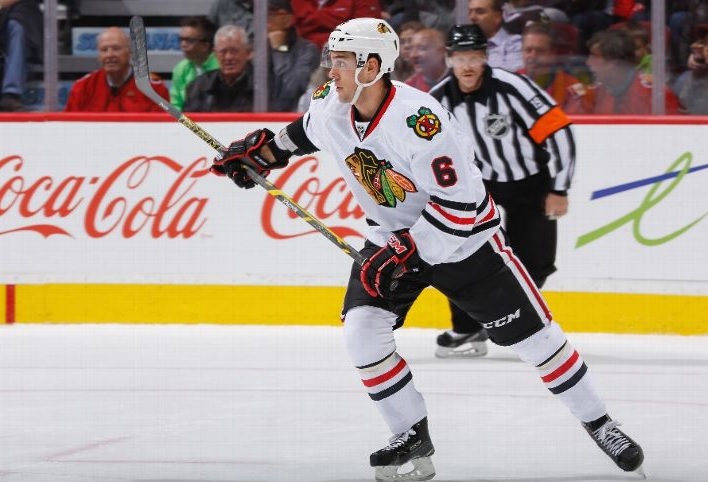 The Blackhawks and Flames played an entertaining game on Thursday night that ended with the Hawks winning 4-3 in regulation.

But let’s all take a moment to appreciate Patrick Kane’s hands on his third period, game-winning goal.

Rookie defenseman Adam Clendening scored on the second shift of his NHL debut, and Daniel Carcillo scored his second of the season 3:12 later to get the Hawks off to a great start. But a parade to the penalty box slowed the Hawks’ momentum.

Chicago started their annual Circus Trip with the best penalty kill in the NHL, but the hosts in Calgary cared not about that mark or the 2-0 lead they handed the Blackhawks early in the first period.

The Flames scored on back-to-back power plays only 54 seconds apart late in the first period while Marcus Kruger and then Niklas Hjalmarsson were in the box.

Chicago had allowed only four power play goals against in the season’s first 18 games.

In the second period, Dennis Wideman chirped at Kane after a whistle and clearly agitated the Hawks’ now-26-year-old star… and that proved to be an epic mistake.

Kane dominated the rest of the game, flipping a perfect backhand pass to Brent Seabrook for the Hawks’ third goal of the night. The goal was Seabrook’s fifth of the season and came in the 700th regular season of his NHL career.

Sean Monahan tied the game less than two minutes after Seabrook’s tally, and the score would stay knotted until Kane’s showtime goal at 9:12 into the third period. That would hold up as the game-winner.

Kris Versteeg added a couple assists in the victory, and Kruger (when he wasn’t in the box) won 11 of 17 faceoffs. Hjalmarsson had as many blocked shots as he did penalty minutes – four – and Johnny Oduya matched his partner’s block total to lead the team.

In his debut, Clendening skated 10:41 and was credited with two blocked shots with his first career tally. He was also plus-two in the game on 22 shifts, and impressive total considering how often the Hawks were short-handed in the game.

Coach Joel Quenneville showed some faith in the young rearguard by skating him on the game’s first power play – which was rewarded with the big goal – and more ice time on later power plays. Clendening skated 1:03 with the advantage in his first career game.

The Hawks allowed goals on their first two penalty kills but were successful on four more penalties on the night. Clendening’s goal was the only power play marker for the Hawks in three opportunities with the man advantage.

Credit Calgary for limiting the usually potent Chicago offense. The Blackhawks were credited with 12 shots in the first period, but managed only six on net in the second and four in the third for a game total of just 22. Fortunately, Jonas Hiller only stopped 18 and the Hawks were able to skate away with the win.

Corey Crawford didn’t have his best night, but stopped 24 of 27 to earn his eighth win of the season. Crawford has now won five of his last seven starts, allowing only 16 goals over those seven contests.