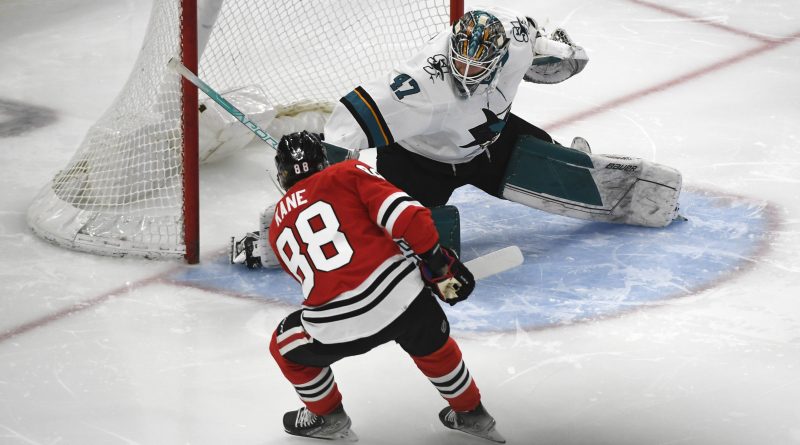 Thursday night was about Pat Foley. The Blackhawks and Sharks are both on the outside of the playoff picture, and even though things on the ice got heated as the game continued the celebration was surrounding the legacy of Foley. After 39 years in the booth, he deserves all of the flowers and applause the fans can give him.

But there was indeed a game to be played for Foley to describe one more time. And that game was dominated by Patrick Kane.

Head coach Derek King put Kane back with Alex DeBrincat and Dylan Strome and it was fire from the jump. It took that line no time at all to make an impact on the game — they scored on their first shift of the night. And this goal came off the stick of Kane.

The Hawks would hold onto the lead for a little more than three minutes. The first period came to a close with one goal for both teams. The Sharks out-shot the Hawks 12-11 in the first, and the momentum favored the visitors heading to the intermission.

It took more than 13 minutes for either side to score in the second period, but the television audience didn’t care. The parade of former players, broadcasters and dignitaries sharing their congratulations with Foley took up a big part of the period.

Jake McCabe had a chance to light up a couple Sharks in the game and actually did a nice job of not sending opponents to the showers early. But the Sharks didn’t like it and there were a few moments with elevated blood pressures on the ice. One of those moments gave the Hawks a power play and they were able to convert. Kane started a passing sequence that ended with Taylor Raddysh scoring the PPG.

Once again, the lead didn’t last very long. Scott Reedy tied the game a little more than two minutes later. But Kane wasn’t done. He set up Calvin de Haan for a go-ahead goal inside the final two minutes of the second period.

The Hawks out-shot the Sharks 11-8 in the second period and took a Tree-2 lead to the Tird period.

Kane wasn’t done. He wasn’t credited with an assist, but he started one of the prettiest passing sequences of the season that ended with Dylan Strome scoring Chicago’s fourth goal of the night.

DeBrincat picked up his third assist of the night on the Strome goal and Seth Jones added his second helper of the night.

Of course the two-goal margin lasted less than two minutes again. Rudolfs Balcers brought the Sharks within one again and the game stayed on edge with physical play and whacks after the whistle.

With about 3:30 left in regulation, Kevin Lankinen made a few sprawling saves but never controlled the puck and ultimately allowed the tying goal. He struggled to see and stop the puck all night and gave up the fourth goal despite a few impressive denials.

So we were tied with 3:25 left in regulation.

There were a couple rushes either way inside the final 40 seconds of regulation but neither team could convert.

It only feels appropriate that we got free hockey in Foley’s finale.

Neither team could finish in overtime and we went to the shootout. Jonathan Toews was denied to start the shootout, but Lankinen rejected Tomas Hertl. Kane was then turned away by James Reimer; both Kane and Toews tried to go five-hole with no success. Lankinen blocked Logan Couture’s attempt to keep the shootout square. DeBrincat added to his three assists with a nice goal in the third round of the shootout. Erik Karlsson was called upon by the Sharks and he opted to go with a slapper that was no good.

And the Blackhawks earned a shootout win for Foley’s exit from the booth.

From one Hall of Famer to another ? pic.twitter.com/oHQt8NUg3S