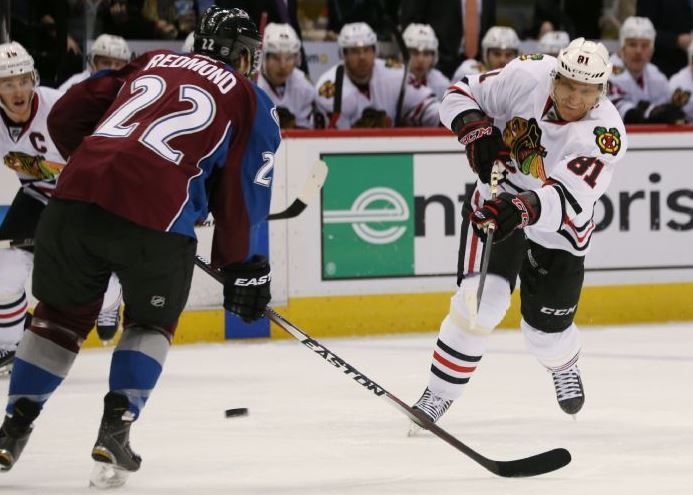 Patrick Kane continued his exceptional play on the Circus Trip, picking up an assist on all three of the Blackhawks goals in a 3-2 win in Denver.

Kane now has 11 points in his last six games, including four multi-point games in his last five contests. His best work set up Bryan Bickell for the game-winning goal with 5:17 remaining in regulation.

Colorado netminder Calvin Pickard deserved a better fate on Wednesday night. He fought off 42 of 45 shots but took the loss. Jonathan Toews and Andrew Shaw scored two power play goals to take a 2-1 lead quickly in a second period that saw the Hawks put 19 shots on net.

For Shaw, the goal was a welcome sight; the Chicago center hadn’t scored since Oct. 23 in Nashville, and hadn’t played in a game in 10 days. Shaw also won 10 of 14 faceoffs and was credited with one hit and five shots on net in the win. Marian Hossa led the barrage for the visitors with nine shots on net in over 17 minutes of ice time. Hossa was also one of 11 Blackhawks to be credited with a blocked shot in the game; Michal Rozsival was the only Hawks skater with more than one, however (he had two).

Rozsival led the team in blocked shots but looked terrible on the Avs’ first goal, scored by Maxime Talbot 7:35 into the second period. He employed the stand-and-watch technique to perfection as Marc-Andre Cliche dropped a pass to Talbot who beat Corey Crawford to open the game’s scoring.

Crawford stopped 27 of 29 in the game to earn the victory.

Rookie defenseman Adam Clendening found himself stapled to the bench for the final 13 minutes of the game, skating a team-low 8:20 and just 13 shifts. He did spend 3:12 on the power play, but didn’t get into the game down the stretch. Daniel Carcillo, who welcomed a son earlier this week, skated only 12 shifts and 8:24 in the game.

However, another youngster has some of coach Joel Quenneville’s confidence. Joakim Nordstrom was on the ice with Marcus Kruger and Ben Smith for the game’s final shift, concluding another solid effort that saw him block one shot and once again tie for the team high with two hits in over 12 minutes of ice time.

The Hawks are now 3-1-0 to open the Circus Trip, but face a tough upcoming back-to-back with a Friday matinee in Anaheim before a Saturday night dance in LA.