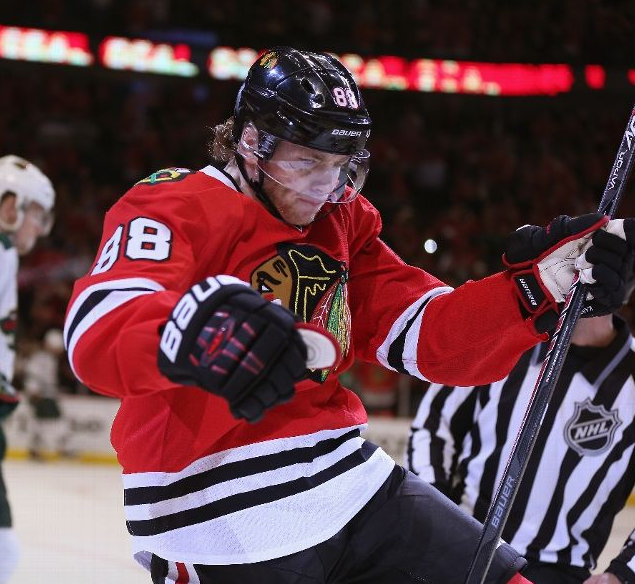 The Minnesota Wild gave the Hawks all they could handle for 50 minutes at the United Center on Friday night.

The Hawks led 2-0 after two periods, but they were outplayed for most of the game’s first 40 minutes. Bryan Bickell tipped in a Brent Seabrook shot for a power play goal in the first, and Brandon Saad made a magnificent pass to Marian Hossa for a power play goal in the second to give the Hawks the lead, but Chicago was out-shot by Minnesota 25-16 (including 17-3 in the second).

If not for another strong performance from Corey Crawford, the Hawks could have easily been tied or behind when the third period started.

Crawford did allow two goals in the first seven minutes of the third period to tie the score. Clayton Stoner and Kyle Brodziak were able to convert to get the game even, but that’s when Kane took over.

Kane scored the eventual game-winner 86 seconds after Brodziak tied the game, and added a second goal to effectively put the game away at 16: 47 into the third. Bickell added an empty net tally to close the books on Minnesota.

With five goals, Kane is now tied for the postseason lead with Colorado’s Paul Stastny (who is watching from home).

After the game, Kane spoke at length about Ben Smith’s contributions in the game and throughout the season. Smith skated 19:30 with one hit, two blocked shots and an assist in the win.

Seabrook and Patrick Sharp had two assist each, and Hossa added two assists to his second period goal in the victory. Jonathan Toews won 16 of 24 faceoffs and had an assist in the win as well.

Brandon Bollig led the team with seven hits in 12 shifts (exactly 8:00) in the game. Seabrook led the team with three blocked shots. Saad played another strong game and was credited with the assist on Hossa’s goal.

Crawford made a number of big saves and showed great rebound control for most of the night. He made 30 saves against 32 shots while earning a victory for the fifth straight game. Crawford has allowed eight goals in the Hawks’ last five games.

The Blackhawks continued their dominance while short-handed as well, successfully killed all three of the Wild’s power play opportunities.

Unfortunately, the win wasn’t all good news for the Hawks. Andrew Shaw was hit hard by Stoner in the first period and left the ice favoring his right leg. He did not return to the game, logging only 3:01 on five shifts.

In Shaw’s absence, Joakim Nordstrom – once again playing in place of Kris Versteeg – saw his role increase. The young forward played 10:37 in the game, and was on the ice for both of Minnesota’s goals.

On the blue line, coach Joel Quenneville distributed the ice time pretty evenly. Duncan Keith led the team in ice time (as usual), but only played 24:42 in the victory. Seabrook (21:29) and Johnny Oduya (20:00) were the only other defensemen to reach 20 minutes in the game; Kane led Chicago forwards with 20:04 on the ice on Friday night.

For the Wild, Erik Haula played a strong game in the loss. He won eight of 13 faceoffs and was credited with five hits, two blocked shots and an assist. Stoner led the Wild with six hits in the game, while Mikko Koivu won only nine of 22 faceoffs after winning over 60 percent of his draws against Colorado in the first round.

Ilya Bryzgalov allowed four goals against 21 shots in the loss.