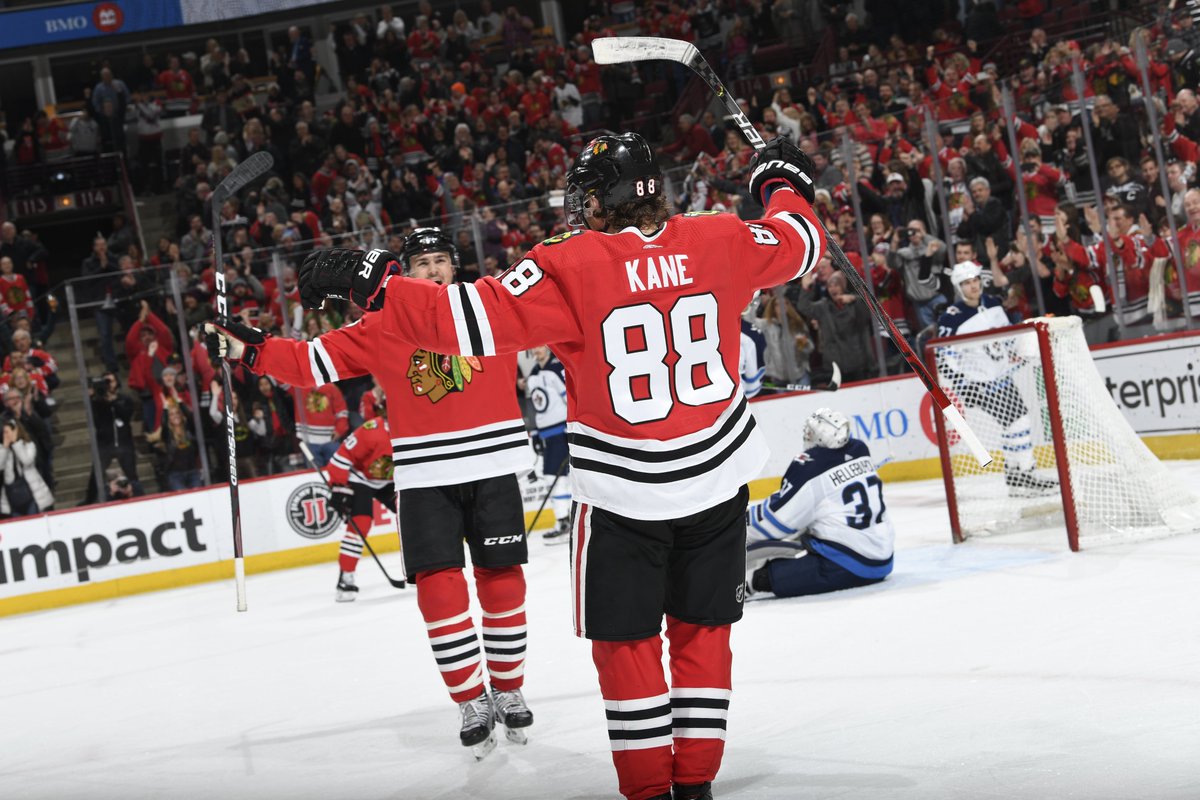 The Blackhawks came home off a strong victory in Toronto to face a division rival. There were reportedly 24 scouts in attendance to watch the Hawks host the Winnipeg Jets, who were two points in front of the Hawks (with one game in-hand) at the start of the night.

History was on the line in Chicago on Sunday night as well. Patrick Kane was one point shy of 1,000 for his career and Jonathan Toews needed two points to reach 800 in his. Duncan Keith came in with 99 career goals. Maybe the scouts were there to witness greatness? Or maybe there were there to watch some of the players on both teams who might be available before the NHL trade deadline.

Chicago got on the board first. Alex Nylander finished a pretty goal 2:51 into the game to give the Hawks a 1-0 lead.

Erik Gustafsson and Connor Murphy were credited with the assists on Nylander’s sixth of the season.

At 14:11 into the first Gustafsson ripped a shot that went in to extend the lead.

Nylander and Highmore picked up assists on Gustafsson’s sixth of the year.

Neither side was generating a lot of shots on net but Winnipeg benefitted from a parade of penalties from Drake Caggiula that started late in the first. With 16 seconds left in the opening period, Cagguila collided with Adam Lowry and was called for interference. Lowry went to the room and was not able to return (upper-body).

Both sides put eight shots on net in the first. Chicago took a 2-0 lead to the second.

The Hawks killed the Cagguila penalty to open the second but he went back soon after. At 4:20 into the second Cagguila interfered with Nikolaj Ehlers and picked up an extra two minutes for barking at the officals.

Chicago killed off four critical minutes of penalty time and played on with their two-goal lead.

The Hawks got a power play 12 minutes into the second but weren’t able to convert. Three seconds after the Jets penalty ended Cagguila went back to the box for a third time – four total penalties – for tripping Luca Sbisa. Chicago killed that penalty as well.

Mark Scheifele got Winnipeg on the board at 18:17 and the score would stay at 2-1 in favor of the Hawks as the second period came to an end.

After the two teams combined for 16 shots on net in the first, Winnipeg out-shot the Hawks 20-14 in the second. Robin Lehner was on his game, however.

Unfortunately for fans who came to see Kane reach 1,000 points the penalty killing time limited his time on the ice. He skated 12:10 in the first two periods and put four shots on net.

The “next goal” is always huge in a one-goal game and it took almost ten minutes for either team to score in the third. Kirby Dach made a strong power move to the net and Connor Hellebuyck left a rebound just out of his reach. David Kampf crashed the net and tapped the puck in to extend the Hawks lead back to two.

Dach and Alex DeBrincat were credited with the assists on Kampf’s seventh of the season.

One minute later Scheifele hooked Nylander and the Blackhawks got a power play. Chicago didn’t convert.

At 14:14 into the third, the fans who paid good money to see history got their wish. Kane was credited with an assist on Brandon Saad’s goal to give him 1,000 regular season points in his Hall of Fame career.

Ryan Carpenter was also credited with an assist on Saad’s 13th of the season. Saad immediatelyt grabbed the puck for Kane.

The entire Blackhawks roster cleared the bench to celebrate with Kane on the ice – a moment that means so much to Blackhawks fans who have witnessed the greatest generation of hockey in the history of the franchise.

Patrik Laine scored to cut the Hawks lead to 4-2 at 17:51 but the Hawks took advantage of an empty net moments later. Dominik Kubalik scored into the open cage to make the score 5-2.

Toews and Cagguila were credited with the assists on the Kubalik goal, giving Toews 799 points in his career.

The final minute clicked off the clock and the Blackhawks won their fifth in a row, pulling into a tie with Winnipeg in the Central Division.