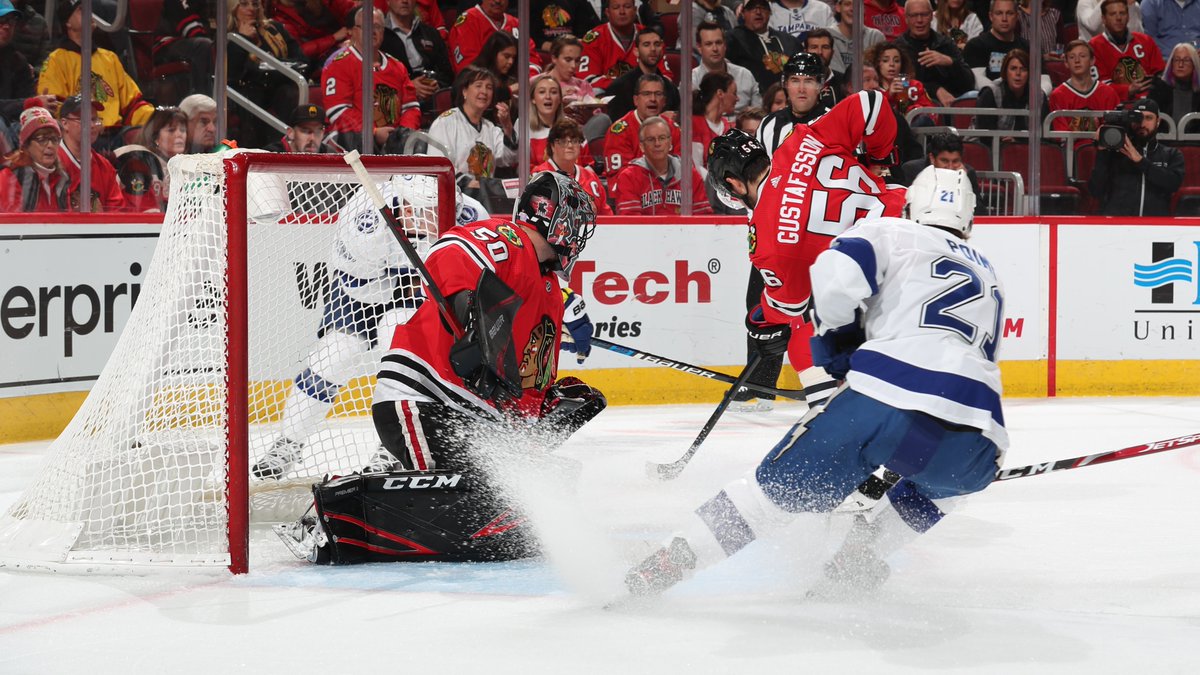 It isn’t ideal for an NHL team to start a game with 11 forwards and seven defensemen.

The Blackhawks did it on Thursday night. Dominik Kubalik was a healthy scratch; Slater Koekkoek took his spot in the lineup.

The Tampa Bay Lighting were forced to do it as well. Nikita Kucherov was sidelined because of an injury.

Stamkos didn’t return to the game after the first intermission.

He was on the bench dressed, opening the door for his teammates. But he didn’t take another shift in the game.

Even without Kucherov and Stamkos the Tampa defense was frustratingly terrific. The Blackhawks struggled to sustain any offense the entire night. After 40 minutes of hockey the Bolts had a 24-20 shot advantage and a 1-0 lead on the scoreboard.

The fact Tampa was doing it with only 10 forwards was more impressive.

Chicago kept trying to find creative ways to crack Tampa’s defense. At 8:27 into the third Brent Seabrook banked a shot into the net off Tampa netminder Curtis McElhinney to tie the game at one.

Brandon Saad and Jonathan Toews picked up the assists on the Seabrook goal.

Unfortunately the game stayed tied for only 77 seconds. Victor Hedman fired a shot at the net and got a screen from Anthony Cirelli, who apparently also redirected the shot past Corey Crawford to give Tampa the lead once again.

Less than three minutes later Brayden Point flipped a shot past Crawford and the Blackhawks were chasing two.

Any momentum the Hawks could have theoretically gained from Seabrook’s goal never materialized; the Lightning struck twice quickly.

Saad complicated matters by taking a penalty with 5:08 left in regulation. One of the Hawks better penalty killers sitting for two of the final five minutes with the team only dressing 11 forwards put the team in a touch spot.

Calvin de Haan got hit in the wrist by a shot half-way through the Saad penalty and went to the bench appearing to be in a good deal of pain but he told the trainers he was alright.

Chicago successfully killed the Saad penalty but were faced with three minutes to score twice when they hadn’t been able to generate any offense all night.

Fear not. Crawford went to the bench and with 2:43 left in regulation the Blackhawks had three forwards – Toews, Dylan Strome and Andrew Shaw – all parked in front of the net. Patrick Kane fired a shot on net and Strome deposited the rebound to pull the Hawks within one.

The assist to Kane was the 600th of his career and extended his point streak to 11 games.

The Bolts iced the puck ten seconds later and Crawford went back to the bench. Chicago tried to get the puck back on net but Tampa’s defense stayed strong in front of McElhinney. With 60 seconds left in regulation a loose puck found Cedric Paquette at the blue line and he was able to hit the empty cage to push the lead back to two.

Kane led Chicago with eight shots on net. Toews was credited with five. The rest of the Blackhawks roster accounted for 21.

Toews also won 13 of 24 faceoffs. Strome, who has struggled at the dot this year, won eight of 12.

Since Kane entered the NHL at the beginning of the 2007-08 season, only five other players have recorded 600 regular season assists: