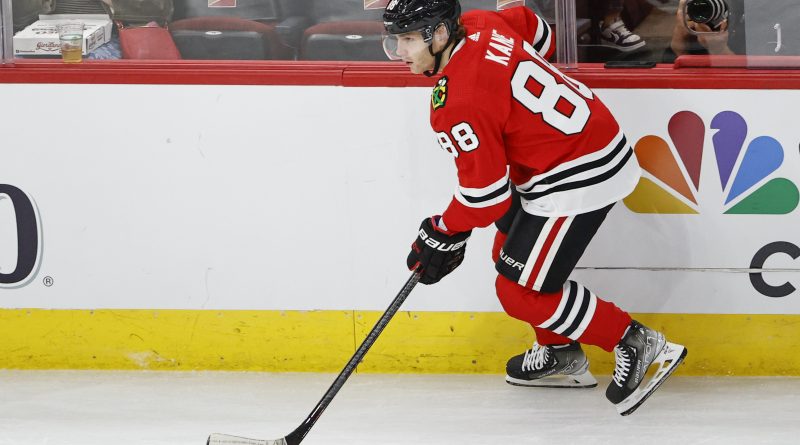 After the Blackhawks announced on Monday that Marian Hossa’s Legacy Night was being postponed, the team took the ice against the Ottawa Senators looking for their first win of the season.

Chicago was desperate for anything good — on the ice or off it. So maybe a young Senators team would be what the doctor ordered.

Unfortunately, most of the first period felt like the rest of this young season. Through 16 minutes, the Hawks were getting outshot 12-4 on home ice. The United Center appeared to be maybe 60 percent filled and the Hawks were struggling to keep those fans engaged. Marc-André Fleury held his own so his teammates weren’t chasing.

And with 49 seconds left in the first period, the Blackhawks broke through against Fleury’s former Penguins teammate, Matt Murray. Patrick Kane picked up a primary assist in his first period back from COVID protocol on Brandon Hagel’s second goal of the season.

After 20 minutes, the Hawks had a one-goal lead and both Kane and Jonathan Toews had an assist.

Only 38 seconds into the second period, the Hawks got a power play and they took advantage. Kane was wasting absolutely no time making an impact on the offense and added a goal to his line two minutes into the second. Toews picked up another assist on the power play goal; Ryan Carpenter was also credited with a helper.

The goal is the 406th regular-season goal in the career of Kane, which ties him with Steve Larmer for third all-time in Blackhawks history. Reminder: the Blackhawks should have retired Larmer’s number two decades ago and he should be in the Hockey Hall of Fame.

That goal started a stretch in which the Blackhawks absolutely dominated puck possession. Kane looked as good and fresh as he has this entire season and the dynamic up front looked completely different. In fact, the Hawks put 13 of the first 14 shots on credited in the first 13 minutes of the second period.

Chicago finished the second period with a strong penalty kill and had a two-goal lead after 40 minutes. Fleury was good again and the offense was actually sustaining pressure in the zone for more than three or four seconds at a time. The Blackhawks out-shot the Sens 15-6 in the second.

As we always say in a two-goal game, the next goal may be the biggest. And on this night, it came off the stick of Hagel… 27 seconds into the third. Toews picked up his third assist of the night on the goal.

Less than 60 seconds later, Kane ripped home his second goal of the night and 407th of his career to give the Blackhawks a 4-0 lead.

Because nothing can be easy, Ottawa got on the board 19 seconds after Kane’s second of the night. Alex Formenton scored for the Senators.

Kane wasn’t done, however. He scored his third goal of the night on a breakaway and, in doing so, passed Denis Savard into third all-time in franchise history with 1,097 career points.

And we’ve gotta say… damn, Kane looked good. Kane and Toews played their best hockey of the season on Monday night and the state line at the end of the night showed it. Toews had three assists and won 12 of 15 faceoffs; Kane had one assist and three goals.

Considering how boring and lifeless the offense was over the opening 16 minutes of the game, the final 44 minutes were a refreshing ass kicking the likes of which we hadn’t seen yet from this Blackhawks team.

The Hawks won 63 percent of the faceoffs in the game and killed all four of Ottawa’s power plays.

Fleury stopped 29 of 30 shots in a second straight strong performance.